New virus case numbers rose by 110 over the last 24 hours. It's the second day in a row the number has swelled into the triple digits. The new cases put the total of all positive cases in Shelby County since March at 87,088.

Total current active cases of the virus — the number of people known to have COVID-19 in the county — rose slightly to 1,531. The number reached a record high of more than 8,000 in late December. The figure had been as low as 1,299 in September, and rose above 2,000 in October. The new active case count represents 1.8 percent of all cases of the virus reported here since March.

The Shelby County Health Department reported that 838 tests were given in the last 24 hours. Since March, 1,007,168 tests have been given since March. This figure includes multiple tests given to some people. 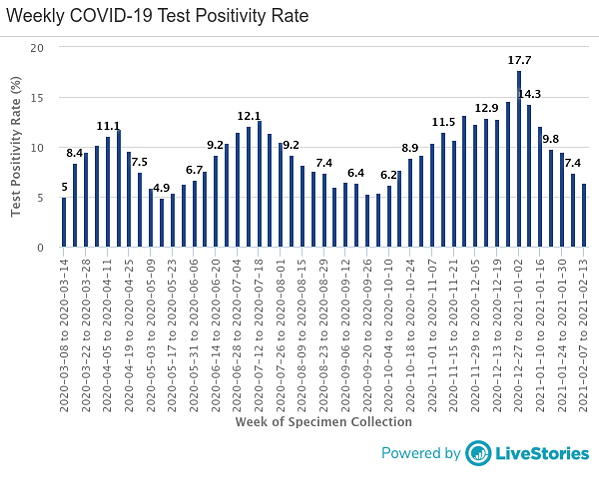 The latest weekly positivity rate fell again for the sixth week in a row to 6.4 percent. That's down from the 7.4 percent rate recorded in the previous week, and down from the record-high 17.5 percent in late December.

No new deaths were reported over the last 24 hours. The total death toll now stands at 1,460.

The average age of those who have died in Shelby County is 74, according to the health department. The age of the youngest COVID-19 death was 13. The oldest person to die from the virus was 103.