In the words of Rachel Stein (Carice van Houten) from Black Book (one of the very best movies of the past decade): "Will it never end?"

I kid Indie Memphis, but as we enter Day 7 of a festival that will now stretch to 10 days, the goodness is starting to turn dedicated film fans bleary-eyed. The reason the festival is going an extra day now is that last week's planned Levitt Shell screening of Elvis Presley's 1968 "Comeback" television special and the Coen brothers' beloved The Big Lebowski has been rescheduled for its original rain date of this Friday, October 16th, with a 7 p.m. start. Indie Memphis organizers didn't want to commit to the date after the initial cancellation last week, but finally settled on it yesterday. The screening will mark a return to what used to be a regular fixture — movies in the park. It could also be a test run for future events, so, please Memphis, let's pack the place out.

Now, Corduroy Wednesday, I'mma let you finish, but last night Alloy Orchestra had one of the best screenings of all time! The Boston-based trio performed their original scores live last night with screenings of new prints of Buster Keaton's classic action-comedy The General and Dziga Vertov's beautiful experimental film The Man With a Move Camera. It wasn't a sellout (boo!), but the crowds were pretty good for both screenings. And those that were there were rewarded with a dazzling experience. If it wasn't the best filmgoing experience I've ever had, it was certainly among the best. And I heard a similar sentiment from many others in attendance.

Now, onto today's schedule with a quick, automatic-writing-style guide

This year's winner of the Hometowner Award for Best Local Feature, The Conversion is a 12-part, web-conceived series inspired by the recent analog-to-digital television conversion and by episodic television shows such as Lost and 24. The first nine installments have already debuted online, with full series showing for the first time here.

The film is the product of the filmmaking trio Corduroy Wednesday, lead by director Edward Valibus Phillips. The first screening tonight sold out long ago. As of late last night there were still some tickets left for the 9:15 show. (Preceding The Conversion is the short doc Chasing Daylight, a "making of" feature about the upcoming local feature Daylight Fades, from two-time Hometowner Award winner Brad Ellis.)

I talked to Phillips about The Conversion for a Flyer cover story a couple of months ago, from that piece:

More recently, emerging filmmaking trio Corduroy Wednesday has gone the web route with their ongoing conspiracy series The Conversion, an inventive techno-thriller inspired by the move from analog to digital television.

"We liked the idea of doing something on the web and getting it out to people and getting immediate feedback," says Corduroy Wednesday writer/director Edward Valibus Phillips. "It's not just one screening in one theater and one city. Now if somebody sees it and likes it, they can say, hey people check this out, and it's available 24/7."

Phillips and collaborators Erik Morrison and Benjamin Rednour financed The Conversion via a lucrative win (roughly $1,500) for their short film CottonBallLand at a recent installment of Live From Memphis' L'il Film Fest, a quarterly contest and showcase that has returned from hiatus to inspire and help develop local filmmakers.

I enjoyed this doc about what was the largest community garden in the country, founded in South Central Los Angeles in the aftermath of the 1992 riots. Threatened with eviction in 2004, the community garden becomes the centerpiece of a civic drama the film captures in vivid strokes, with politicians, citizens, lawyers, developers, and community activists of varying levels of motivation and integrity (one derided as a "poverty pimp") getting involved in a tug-of-war over land many working-class residents are using to help feed their families. — Herrington

According to my highly unscientific study, these two features from Brooklyn-based cult filmmaker McAbee were the word-of-mouth hit of the festival. Both are black-and-white space cowboy sci-fi musicals, or something like that, and they re-screen in something of a double feature today (Stingray Sam is only an hour long). Stingray Sam, McAbee's newest film, received a Special Jury Prize for Innovation at the festival. The circa-2001 American Astronaut inspired David Lynch references from many trustworthy festivalgoers, one of whom cited it as one of the best indie films he'd ever seen. — Herrington

Filmmaker Mark Jones (Eli Parker is Getting Married, Fraternity Massacre on Hell Island) serialized this third feature on the web this spring, but will screen it in its entirety tonight. It's a cliffhanger-based soap opera homage about a Mississippi bride (Corie Ventura) shot on her wedding day. Jones has described the series as "one third Dallas, one third Dynasty, and one third Gays of Our Lives." — Herrington 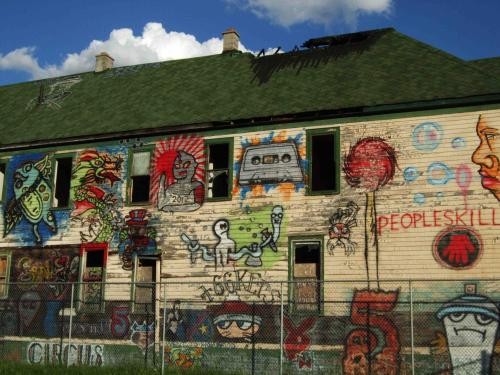 This provocative short documentary is screening in the same program as the aforementioned The Garden, making for a terrific double-bill. It's a personal, poetic look (montage-style images with filmmaker voiceover, no on-camera speakers) at decaying Detroit from a hometown perspective. Filmmaker Nicole Macdonald notes that the city has lost one million residents since the 1960s, more than the total population today. She plays with the notion of modern Detroit as a "collaborative outdoor sculpture, between man and nature." She notes how the recent Super Bowl in Detroit had the opposite impact that big events (like the Olympics) usually have in cities, in this case "tearing up a city because a big event is coming." And, in conclusion, she cites late Detroit mayor Coleman Young's assertion that modern Detroit is an "advance warning system" — the overgrown disaster heading your way. — Herrington

Robyn Hitchcock: I Often Dream of Trains in New York (9 p.m.)
The mercurial rocker performs live at Indie Memphis Thursday night, but you can get ready with this concert film, which documents a New York performance from 2008.