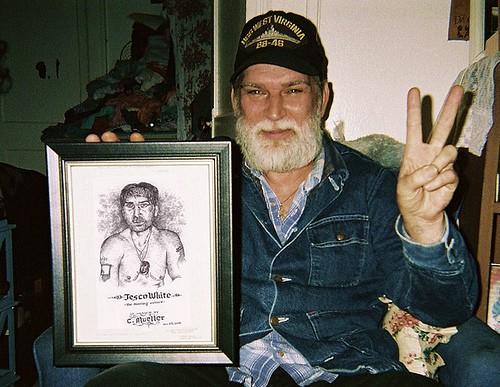 White, 53, originally achieved notoriety as the subject of the 1991 PBS documentary Dancing Outlaw, which chronicled White's devotion to the dying art of mountain dancing (his father, D. Ray White, is regarded by some as the greatest mountain dancer who ever lived), as well his many criminal exploits, regular drug use, and troubled family life. Yet the film played like a comedy, and took on a life of its own thanks to word of mouth and relentless bootlegging.

In 2009, actor and Jackass creator Johnny Knoxville produced a new film about White and his large and equally rambunctious extended family, titled The Wild and Wonderful Whites of West Virginia. The film serves as both an update on the life of Jesco White, and a culture study on the depressed, poverty-ridden West Virginia community that helped shape the Whites into a hell-raising bunch of misfits and tap-dancers.

The Wild and Wonderful Whites of West Virginia will screen at 2 p.m. at the Memphis Brooks Museum of Art, 1934 Poplar. The film's co-producer, Storm Taylor, will be on hand for Q & A after the show. Tickets are $6 for museum members, $8 for non-members.

Later that night, Jesco White himself will appear across the street, headlining a bill at the Hi-Tone (1913 Poplar) that also includes Knoxville's Pick Up the Snake and local twang-punks Joecephus and the Georgejonestown Massacre. White's performance will likely consist of a mixture of his trademark mountain dancing, along with stand-up comedy and off-the-cuff insanity, and should be well worth the $13 cover charge.

But for those still in need of convincing, here's a montage of some of White's finest ramblings from the original Dancing Outlaw documentary: