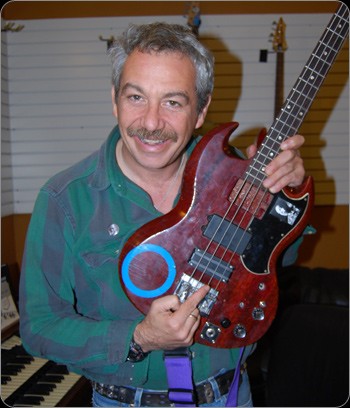 As a founding member of the influential '80s punk/hardcore trio the Minutemen, he pushed the limits of what it meant to be punk by infusing elements of funk, jazz and just about everything else. As a solo artist, he's explored the boundaries even further through a trio of highly personal and ambitious "rock opera" concept albums. Over the years he's collaborated with everyone from J Mascis to Sonic Youth to Dave Grohl to Perry Farrell, and the list just goes on and on. And to top it all off, he's also a current member of the iconic pre-punk band Iggy & the Stooges.

Watt is releasing two new albums in 2011; his excellent third "opera" Hyphenated Man came out in March, and his new double-bass project with Black Flag's Kira Roessler, dubbed Dos, will unveil a debut album in July. He spoke to the Flyer this week via telephone about all this and more.

Flyer: What is the concept behind your new album?

Watt: Well, this is my third opera. It's really just one song, in 30 parts. It's about me and the times I am in now, as a 52 year old punk rocker, and defining roles. I wanted to have this dialog with myself and explore the devices and roles we assume as we progress in life - the things guys do to be guys.

It was inspired by a lot of things. I participated in the Minutemen documentary (We Jam Econo), and decided to adopt the Minutemen song paradigm for this record, the short-song format. I didn't want it to be a Happy Days nostalgia or anything, but I wanted to re-visit that approach. And then also there's some of Hieronymous Bosch and The Wizard of Oz in there.

Wait, how was The Wizard of Oz an influence?

Well, she (Dorothy) comes back home to find out it was the farmhands all along - that's what she's freaking out on. This guy was the tin-man. This guy was the scarecrow. It's the idea of defining an individual's role in society. Think off all the roles you play in life: bill-paying man, child-feeding man. Some dudes freak out on figuring those things out, playing those parts. Some people think it's supposed to be some kind of nightmare you wake up from, getting older. But I wanted to really celebrate the journey, really attack it, on this record.

I usually start with a title. I need a focus. Then I'll usually come up with some kind of lick, but I don't want it to be excessive finger-work on the bass neck just for the sake of it, there has to be some kind of point to it. I was asked recently by some bass magazine what the future of the instrument was, and I told them it has to be composition, not pure technique.

Is it harder to write songs on the bass?

(Laughs.) Yeah, the bass is usually where you stick the lame guy, the retard. Right field. But I find it's an interesting place to be, making the other guys look good and backing them up. That's why I usually put the drums and guitar closer to the front of the stage than most people do, I want people to see them.

But I actually used D. Boon's (Minutemen singer/guitarist who died tragically in 1985) telecaster to write this record. Like I said, I didn't want it to be too similar, so I decided to take away the only Minuteman from the writing process - me.

Are you surprised by the lasting popularity and influence of the Minutemen?

Oh, yeah. Absolutely. I guess I sort-of understand that D. Boon was this powerful musician and image - he truly loved and believed in music. But I never expected us to have a movie or still have a following now or anything. You have to remember, we took a lot of hell. Punk music was hated. Now people are more open-minded, and I'm grateful for that. The fact that I'm respected now is somewhat of a surprise. Someone told me that Green Day has a Broadway musical. In the old days that never would have happened.

How did you end up joining the Stooges?

It's a total mind blow. I was doing a tour with J Mascis and the Fog, and J asked if I would sing a few Stooges covers as part of our set so that he wouldn't have to carry the whole show. We eventually ended up jamming with Ron Asheton (Stooges guitarist) on stage a few times, which eventually led to J and I doing some shows with the Asheton brothers. I don't want to take full credit or anything, but I guess Iggy (Pop, Stooges frontman) heard about these shows and decided he wanted in.

So I'm on tour in Tallahassee, FL and get this phone call. It's Ig. He just says, "you're the man." And then he asks, "would you wear a t-shirt instead of flannel?" (Laughs.) That was our first conversation - about fashion and clothes. The other funny thing he said to me was, "however we end the songs, that's how we end them."

I've been doing it 8 years now. I never expected something like this to happen. Back in the day, punk music wasn't a sound, it was an ethic. The only thing we all had in common was the Stooges.