Memphis Beat, "The Things We Carry"

I come back from vacation to this? After a two-week reprieve from Memphis Beat duties, I'm taking the baton from Greg Akers for last night's episode:

Episode Named After: The burden of family tragedy Det. Dwight Hendricks (Jason Lee) has carried for years, since his cop dad was killed on the job when Dwight was a young boy. 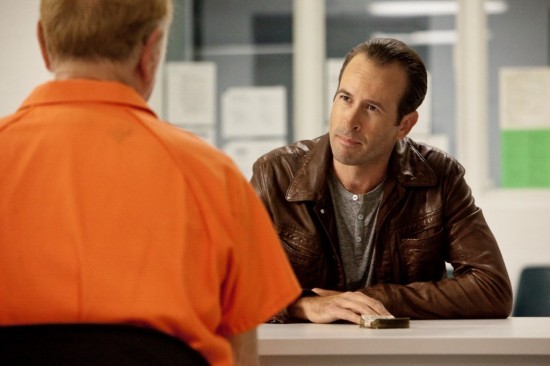 Rowdy Memphis (Plot Synopsis): Rather than an A plot and a couple of B plots, this week's episode runs on two roughly equal tracks. Dwight and his mother (Celia Weston) take a road trip to New Orleans to attend the parole hearing of Tim Mason (Memphian Red West), the man convicted of killing Dwight father 30 years earlier. Mason has brain cancer and has only a few months to live, making him a candidate for the state's "compassionate release program," but needs the approval of Dwight and his mother in order to obtain parole.

On the second track, Lt. Rice (Alfre Woodard) steps in for Dwight, going into the field as Det. Whitehead's (Sam Hennings) number two as the pair investigate a potential arson case at the Carver movie theatre, a case that takes a detour — no, really — into private sex parties that were being hosted at the theater. (In an otherwise poorly written show, the sex-party bit allows Woodard a funny line reading while interrogating a sex-club member: "I don't know what kind of woman you usually go for, but I'm of the dominating variety.")

For Dwight, this week's story is about coming to grips with his father's murder — including evidence that his dad might have been on the take. Back on the home front, the other case is a mechanism for continuing to build on the at times prickly, at times combative relationship between Rice and Whitehead, who find a new level of respect for each other as they solve the case.

Respect (Memphis music featured in the episode): The episode closes with Dwight back on stage at the familiar assumed-to-be-Beale-Street bar, belting out a duet of Eddie Floyd's Stax classic "Knock on Wood" alongside a Bourbon Street barkeep and love interest/old flame Dwight ran into in New Orleans. Other music I was able to ID: "Don't Do Me No Favors," by contemporary British R&B artist James Hunter, the Blind Boys of Alabama's "I Shall Not Walk Alone," and a version (not sure which version) of the Slim Harpo-identified blues standard "I'm a King Bee."

The City (Truthy Memphis): The headline in this episode from a Memphis perspective is the casting of Red West as the man imprisoned for killing Dwight's father. West got his start, perhaps, as a member of Elvis' entourage, the "Memphis Mafia." (Memphis Beat riffs on this with the suggestion that West's character might have killed Dwight's father on orders from the "Memphis mafia.") But at this stage the 75-year old West is an accomplished character actor, having appeared in films such as Roadhouse, The Rainmaker, Glory Road, and, most recently, delivered a superb performance in Ramin Bahrani's North Carolina-set indie Goodbye Solo, my third favorite movie of 2009.

So, West is a great get for Memphis Beat, but the show doesn't give him much to do. West lends plenty of gravity, but only appears in a couple of scenes and only has a few line readings. It feels like a wasted opportunity.

Union Street (Unreal estate): The fire at the "Carver Movie Theater" is portrayed as quite the civic blow. The theater is "as much a part of Memphis as the Peabody," says Dwight, who saw his first movie there with his dad — Jailhouse Rock. Whitehead agrees, saying that he took a date there only a couple of weeks earlier — to see Last Tango in Paris. It was "the only movie revival house we have in town," Whitehead laments.

To make the movie theater angle even more odd, the theater was sometimes rented out for "weird adult sex parties" in which they would "run vintage pornography on the big screen." In other words, this is the most bizarre vision of Memphis the show's ever presented.

Among the things presumably lost in the fire: Original prints of Elvis films Viva Las Vegas and King Creole, which are valued in the show at $50,000 a pop. I could be wrong, but I seriously doubt prints of those films would fetch that amount even if they came from Elvis' personal collection.

Analysis: The artificiality of Memphis Beat was thrown into relief this week with the road trip to New Orleans, where the show is shot. In these scenes, instead of letting New Orleans stand in for Memphis, Memphis beat was able to let New Orleans be New Orleans, resulting in placing Dwight — for the first time in the series — in real, recognizable locations (Bourbon Street, Garden District, Café Du Monde). Filming the show outside of Memphis isn't inherently an aesthetic problem, but taking the easy road of incorporating the New Orleans locations made it one.