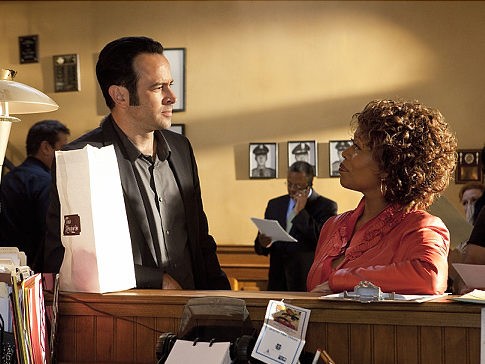 Memphis Beat has been canceled.

Our long civic nightmare is over.

On the cancellation, the show's executive producer Liz Garcia said:
"To the fans of #Memphis Beat, thank you for watching, critiquing, singing along and supporting our show. It was a pleasure TV-ing for you."

Qualls had two comments on Twitter:
"Its over. Had a great time for 2yrs, but MB had run its course. My magic 8 ball is telling me, Ill find a new show soon...so there's that."
"Gotten so many kind words & wishes. Yes Memphis Beat's cancellation is final. Thanks to the fans for watching. We had a blast entertaining u"

Notoriously, though set in the Bluff City, Memphis Beat was filmed in New Orleans. (The one in Louisiana.) This was a budgetary decision and is what it is. It wasn't the producers' fault. Blame the state of Tennessee for not incentivizing Memphis film production. (Memphis filmmaking industry cheerleader Craig Brewer has something to say on that topic, kind of taking a different stance on the matter.)

The first season was more focused on the city, with plots often spinning from city tropes, including ones that the writers made up. Hendricks was a Southun Sherlock who was a self-appointed protector of Memphis, righting wrongs and making the streets safe for citizens like him who loved their hometown. The affection for Memphis was infectious. The show was dumb at times, but its heart was the right place.

The second season was a let down, from a Memphis perspective. The plots were increasingly unrelated to the city, and there was a general sense that the show just didn't care anymore about where it was set. Hendricks became more of a "human whisperer" whose homespun advice and insight into the human condition propelled the character. Memphis edged further into Mayberry territory. The season highlights — notably Red West as the man who murdered Hendricks' father years before — came at a less frequent clip.

Though a failure creatively, Memphis Beat's demise is not necessarily a referendum on the viability of setting a show in one place and filming it in another. I still believe that it's possible. Justified proves it can be done in a rural setting. What about shows set in recognizable urban places? TV New York is often studio Los Angeles.

But I do think Memphis Beat's failure underscores how difficult it is to pull off the feat. Would a Memphis Beat filmed in Memphis have been a success? Impossible to know. But it would almost by default have been more authentic and agreeable. Alternate-reality Memphis Beat would have had some love handles a local viewer could have grabbed on to.

That probably wouldn't have translated to the crime-of-the-week plots, which ranged from mildly enjoyable to mildly execrable to, at their worst, boring. However, denying the show's writers, filmmakers, and actors immersive access to their subject matter (the city of Memphis) potentially denied them inspiration for plots, acting points, and settings that could have elevated Memphis Beat from a third-tier show deserving of cancellation to a second-tier program deserving of DVR'ing (though likely nothing short of a different concept would have made it worthy of the gold-standard tell of great TV: marathoning episodes.)

A constant stream of regional cultural and geographic inaccuracies didn't kill the show, but it didn't help.

Lazy writing and underdeveloped ideas killed the show. The city of Memphis was just another victim of another inane Memphis Beat crime with another unsatisfying conclusion.