Shot in Memphis last August and September with a crew heavy on local talent, the low-budget indie comedy Losers Take All will have its local debut at Playhouse on the Square Saturday at 7 p.m., on the third night of the Indie Memphis Film Festival.

The film, directed by Alex Steyermark and co-written by producers Winn Coslick and Andrew Pope (another producer, Mike Ryan, had worked in Memphis on films such as Forty Shades of Blue and 21 Grams) is set primarily in 1986 and concerns the growing pains of an unpretentious, Replacements-esque post-punk band, who form, record, and tour while struggling with various low-key triumphs and tribulations. 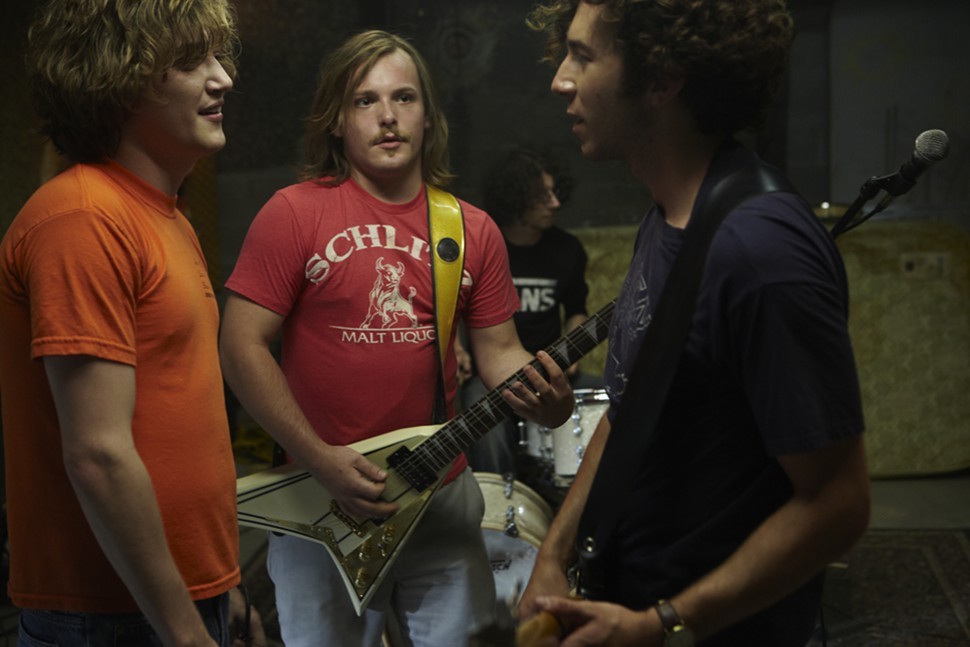 The band is meant to embody the era's blend of punk —  the orientation of lead singer Brian (Kyle Gallner) and bassist Dave (Aaron Himelstein) and metal — lead guitarist Billy (Billy Kay) and drummer Peter (Jason Burkey) — while the story depicts the scrappy world of indie labels, clubs, and regional touring and the era's now-quaint dilemma about whether to stay indie or pursue a deal with a bigger record label. Serving as comic relief is clueless but enthusiastic would-be manager Greg (Adam Herschman).

Losers Take All adores this musical milieu almost to a fault. Visual and aural touchstones to bands such as Minor Threat, Black Flag, the Descendents, and Bad Brains abound, and the movie treats twin Twin Cities titans Hüsker Dü and the Replacements as almost spiritual objects. (I can relate.) Hüsker Dü's 1985 album Flip Your Wig is the album Brian and Dave turn their more metal-oriented new bandmates onto to give them an idea of what they're trying to do — “It's not metal. It's not really punk. And it doesn't suck.” And a potential opening slot on a Replacements show drives the film's climax.

There are also cuter references. The opening scene has a sign in the background suggesting Brian and Dave attended “Stinson High” (a reference to the Replacement brothers Bob and Tommy), which Greg spends time at a rehab facility in Minnesota called New Day Rising (named after a Hüsker Dü album). The entire movie feels like a fictional homage to the terrific ’80s post-punk scene study Our Band Could Be Your Life.

I don't think the film ever specifies Memphis as a location but, unlike with 21 Grams, it doesn't disguise the city either. There's a shot of the band crossing the Mississippi River as they head out on tour. The band plays a local gig at the bottom of a four-band bill at the Antenna Club. And one bit features an comically over-the-top local furniture store commercial that incorporates professional wrestling — it's hard to imagine a collision that better captures “Memphis in the ’80s.”

Other references include Dave's work uniform (a Tops Bar-B-Q shirt) and a first gig at a pizza shop “off Park,” while identifiable locations include Midtown's Hi-Lo Studio (also used in $5 Cover), Premiere Palace, and the Orchid Club.

On-screen, the most prominent of a few local roles is Billie Worley's comic turn as a heavy-metal frontman whose segue into punk stands as a more opportunistic and less organic contrast to his Van Halen-loving rhythm section, who leave to join the film's punk-oriented protagonists.

One of the film's strengths is its original music, which was recorded locally at Scott Bomar's Electraphonic Recording studio under the supervision of Bomar and ’80s power-pop icon Marshall Crenshaw. The music for the fictional band, the Fingers, was recorded by a local unit consisting of Steve Selvidge (guitar), John Paul Keith (guitar), Mark Stuart (bass), and Paul Buchignani (drums), with Keith and Buchignani serving as instrument coaches for the actors.

The band's on-screen songs are convincing, the most prominent of them written by Keith (“Anyone Can Do It,” a countrified version of which appears on his recent album The Man Who That Time Forgot), and local songwriter Jack Yarber (“Everything Little Thing Goes Wrong”). Bomar (in studio) and Keith (as a club soundman) also make dialogue-free on-screen appearances.

Losers Take All is a likable film, with a believable core cast and a mostly understated but effective sense of time and place. It will be especially interesting to people as invested in this musical world as the filmmakers are, a niche market of which I am a member. But it's hard to imagine this minor, star-free film garnering a theatrical run deep enough to bring it back to town.