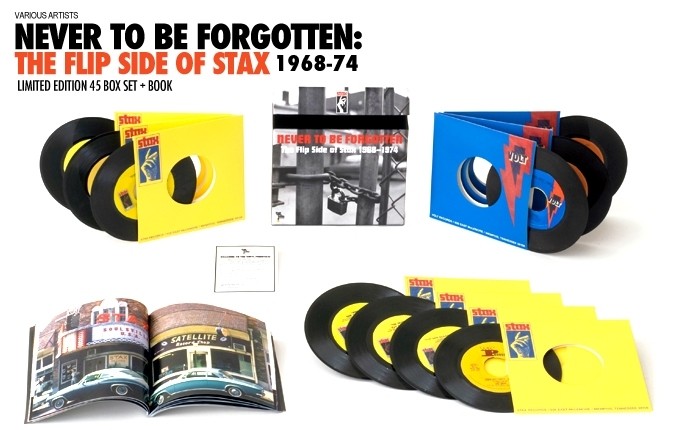 The unprecedented scope of this year’s Record Store Day is evident on a local level as well, with Seattle's Light in the Attic Records sponsoring the Memphis Record Store Day Crawl. To coincide with the label’s official Record Store Day release of Never To Be Forgotten: The Flip Side of Stax 1968 - 1974 — a lavish boxed set of 10 vinyl singles that collectively cover the final days of the legendary Memphis soul label and come packaged in a hand-numbered edition of 4000 — three DJ/meet-and-greet hours will be set up throughout the afternoon at Shangri-La Records (2-3 p.m. featuring DJ Buck Wilders), Goner Records (3-4 p.m. featuring DJs Zac and Eric), and then the finale at a satellite record shop located in the Stax Museum itself (4—6 p.m. featuring DJs Leroy and Jones, plus free admission to the museum for these last two hours). Keeping with the Record Store Day tradition/policy, this boxed set will only be sold at these three locations on Saturday.

So come out and support your local brick-and-mortar record retailer, but be wary of a couple of Record Store Day's recreational hazards: Record Store Day tends to attract an unfortunate element of get-rich-quick, online record-flippers who can be rather pushy (literally) and who only step foot in record stores for this annual unveiling of limited-edition vinyl (the days following Michael Jackson’s death notwithstanding). Conversely, Record Store Day is always instrumental in introducing people to the growing pastime of record-enjoying/collecting, so experienced readers are encouraged to be helpful and polite when a high-school senior or middle-aged housewife taps you on the shoulder and asks about the best places in town to acquire a new or used turntable. Also, please understand that the three participating locations do not collectively present a truly walk-able afternoon in the same sense as, say, similarly-named St. Patrick’s Day festivities. By “crawl” they really mean “drive.”