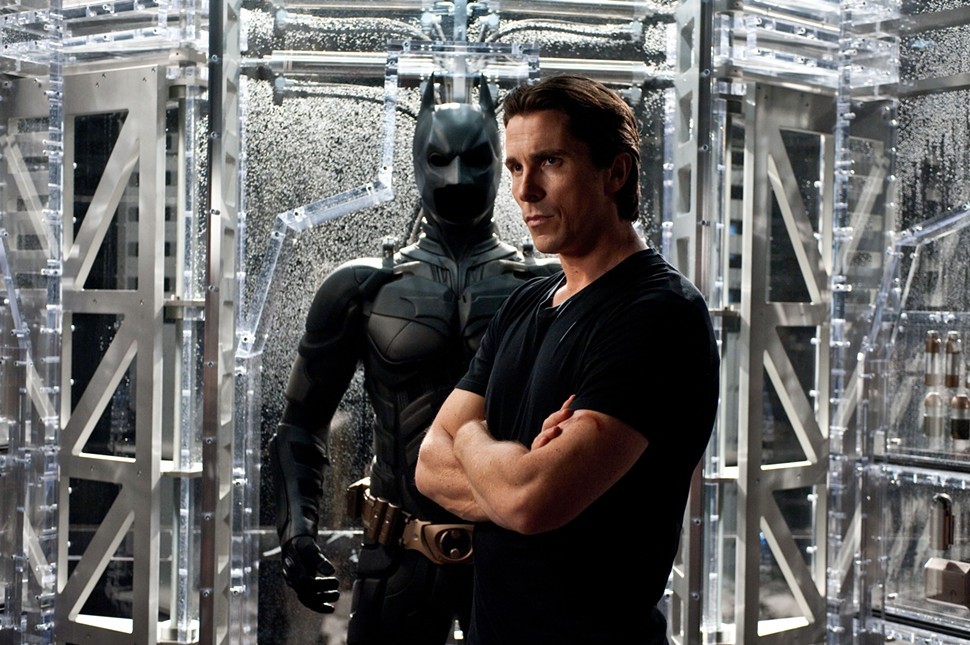 Batman Begins was released in 2005, with Nolan setting a new bar for what can be done with a superhero film as he got elbow-deep in the meat of the Batman origin story. The operative word for Batman Begins is "fear."

The sequel The Dark Knight, hit the streets in 2008 to rapturous praise on the way to the then-second biggest box office grosses of all time. The Dark Knight explores much more fully the criminal underworld of Gotham, particularly menacing new figure the Joker (Heath Ledger). Likened to Michael Mann's epic crime saga Heat by this publication, The Dark Knight is much more than a superhero movie. If Batman Begins was a great comic book movie, The Dark Knight was simply a great movie: bigger and more complex, with greater performances than its predecessor. The operative word for The Dark Knight is "chaos."

We'll let Herrington start with why he prefers DK to DKR:

Herrington: I probably enjoyed DKR more than my initial review suggests. If you merely view it by the standards of summer action blockbusters or super-hero movies — of which there doesn't seem to be much of a difference these days — then I think it's pretty plainly exceptional. I tried get that base assessment out of the way early by tagging it with superlatives like “sprawling,” “commanding,” and “entertaining.”

But director Christopher Nolan is a better filmmaker than most working the blockbuster beat, and his Batman trilogy is predicated on far more ambition that most if not all super-hero movies, so my criticisms of the film are most rooted in comparison to his own work. And while DKR wraps up the series — or does it? — in a relatively satisfying manner, I don't think it's nearly as fine a standalone film as DK.

For me, DK worked better as pure action cinema: The stadium demolition in DKR is pretty slick and the subterranean slobber-knocker between Batman and Bane is — and has to be — the best “fight” scene in the series. But there's nothing in DKR as sleek, tense, and sustained as the opening bank heist in DK (the new film's opening airplane hijacking/crash is overblown and chaotic by comparison), or as stylish as that film's swooping Hong Kong skyscraper sequence. The action in DKR becomes more militaristic and less interesting.

I also think DK has a more coherent and pleasurable closing structure, triangulating between Good Crazy (Batman), Bad Crazy (Joker) and Conflicted Crazy (Harvey Dent), whereas DKR has too many characters, too many motivations, and too much plot to juggle.

Though DKR expands the character universe nicely, I think DK is clearly superior in terms of performance. Heath Ledger's instantly legendary turn as the Joker towers over Tom Hardy's enjoyable but more limited Bane, and Aaron Eckhart's Harvey Dent is an underrated performance. This might be a closer call, but the best performance in DKR — Anne Hathaway's Selina Kyle — is underused.

And, to me, DK has more to say. Or at least a better sense of what it's trying to say. It's about ends and means. About what it takes to combat increasingly depraved threats, and also what that might cost. It's richly conflicted — nearly sympathetic toward what it's ostensibly critiquing — but I think DK has a much firmer grasp on its issues. I found it impressively resonant without it being overtly topical. DKR, by contrast, feels very murky to me — slippery in a shoddy kind of way. It throws lots of words and images related to class inequality at you as if to impress you that it's about something but I didn't detect much in the way of tangible ideas or insights.

Instead, what I think DKR cares about a lot more than ideas and performance and incident (more on this next) — and perhaps why I care about it a lot less — is story and backstory and mythology. It goes back so much to all that extended origin stuff in BB, which I found a little exhausting at the time. I wrote my review before you saw DKR, but I suspect I might have predicted your embrace of it by suggesting that it would play better to the comic-book partisans and Batman-mythology diehards.

That's enough — too much really — for now. You didn't get a chance to review DKR and there's a lot about it I'm interested in getting your reaction too. But I'll give you the chance to make your general case first.