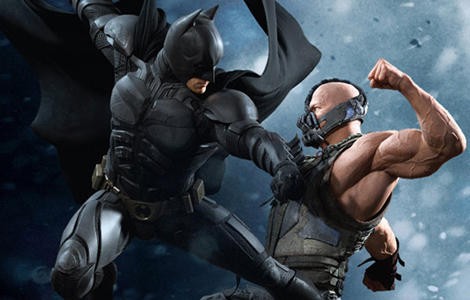 Yesterday, Chris Herrington made a “sprawling,” “commanding,” and “entertaining” case that The Dark Knight (DK) is the best in the bunch. Today is Akers' turn to make the case for The Dark Knight Rises (DKR).

Greg Akers: Chris, since you had the opportunity of primary source film reviews to support your case for each of DK and DKR and I didn't, I feel that first I should establish one thing: I love The Dark Knight. I think it's a great movie.

I also think DK is flawed; wounded in ways that DKR is not. I love Dark Knight Rises more, in spite of its own, lesser flaws. Hence, this discussion.

Where to begin on why I prefer DKR? Let's see, I believe I was around about 6 years old the first time I ...

First, criticisms of DK (things I don't love about a movie that I love):

*I don't love Love LOVE Heath Ledger as Joker the way the rest of the world does. I think he's outstanding and even, in agreement with you, Herrington, legendary. His performance is also a little bit too fussy for my taste, a little too relentlessly performatory (made that word up). I submit that when people love DK with a soul-burning passion that denies all other comers, they probably do so because of Ledger.

*And the other reason that one might love DK above all else is the genre aspect of the film, which you hit upon. DK really is Heat, right down to its blue steel hues and heist-fallout plot machinations. I love it for these reasons too, but I submit that Michael Mann has Nolan a little distracted. Nolan clearly wants to play in the Heat sandbox, but it comes at the expense of the comic book characters. Was Batman actually in DK? I can't remember. He's virtually a non-factor. I acknowledge that you probably don't see that as a negative, but since they got everyone all dressed up for a Batman movie, I wish it was a little more Batman-y.

*Maybe some of Joker's chaos rubs off on DK's plot, because sometimes the film doesn't connect the dots in a coherent manner for the audience. I've seen it multiple times, and there are a few moments where I have to go with the flow even though I know the plot wouldn't hold up to scrutiny. Remember when Joker crashes Bruce Wayne's party, and Batman has to jump out a window to save Rachel Dawes? That's the end of the sequence, but I'm pretty sure Joker and his henchman are left still up in the penthouse menacing Alfred. That's one example. Instead of breakneck, the film's pace sometimes feels rushed. DK is about three half-movies smashed together, and even at 152 minutes, DK may not be big enough to handle all its stuffing.

*The elaborate set piece/sociological game Joker plays with the two ferries is awfully cute for my tastes, in addition to being awfully elaborate for a character who "doesn't make plans." Then who filled the engine rooms with barrels of explosives?

*I'm not a huge fan of the ending to DK. Dent is dead, and Batman saved Gordon and his family. Yay! So, Batman comes up with this scheme where he gets publicly accused of murder and has to go into hiding indefinitely? Because Gotham needs that lie to survive, and here it is just 10 minutes after its citizens proved their generously mature behavior in the Morton's fork on the ferries? Hey, Batman, let's think about this more more than 15 seconds and maybe we can come up with a better plan than yours.

Enough with the haterade. I love DK, honestly.

I love DKR more. Here's why:

*The plot doesn't meander. Like DK, DKR has a complex, widescreen plot. But it doesn't get consumed by twists. DKR flies like an arrow straight through to the end. I've only had one viewing, but I'm not sure it has the glaring loose ends that DK does. DKR holds it together.

*And that's not to say DKR lacks DK's potency or energy or urgency. As you note, the first tussle between Bane and Batman is the best fight in the series. I think it's more than that. I'm trying to come up with a reason it's not the high point of the trilogy. Not only do the fisticuffs possess immense physical power; not only does Bane cement his place as an astonishingly imposing adversary; not only is the hand-to-hand combat one of cinema's best since the Bourne Ultimatum's tiny bathroom scene; not only that, but the sequence is shot through with emotional meaning for the characters. Here is the Bruce Wayne/Batman dichotomy as Nolan sees it at its most elemental — among other things, the desire to avenge crossed with the desire to die — and all done in what could have been another boring fight scene. And Bane's words, "Victory has defeated you." A criticism of Bruce Wayne or something more? This is Batman's death scene, the one you're not going to get at the end of the film, the scene where he loses because he wants to. The film is called The Dark Knight Rises because of this scene. Rises from the dead. It's glorious.

*I loved that DK was concerned as much as anything with the power vacuum left in the criminal underworld after Falcone was removed in Batman Begins. It made for fascinating plot turns. DKR intrigues me because it trades the streets for the Street and the scuzzy gangster fraternity for the scuzzy corporate world of Wayne Enterprises. Bruce Wayne's withdrawal from society has left a power vacuum in the Wayne boardroom, and the internecine battle is no less vicious than the one depicted in DK. A subtle juxtaposition and broadening of the definition of "criminal."

*DKR seems smarter to me. Rather than DK — with its simple, primal, hypothetical games, like a freshman philosophy class, its poking at civilization that raises the specter of society falling apart only to rescue it with an unearned-in-the-film, non-foreshadowed generosity — DKR seems tricksy in a far more subtle, more intellectual and truthful way.

I hear you that DKR's themes seem just out of reach, but I suggest they're just more nuanced than DK's. In DK, I saw some overreach for topicality (9/11, the Patriot Act, and the War on Terror) mostly because the implements of the metaphor were so broadly drawn. An eavesdropping tool to fight injustice? "I agree, Lucius, It's too much power and you should use it ethically and then destroy it. And just how do we fight monsters without becoming monsters ourselves?" And where you saw conflicted in DK, I saw a half-cooked premise. Where's the metaphor in the ending to DK? George Bush became a villain for the good of America? Bitch, please.

DKR sets up most of its allegories strategically, at various points throughout its plot, detonating them one by one so that in the end it creates one big pattern of meaning without ever seeming to overdo it. DKR explores terror suspects held indefinitely, without due process, Guantanamo-style, in a relatively off-hand way — the Dent Act, which gets a mention and a plot point but isn't belabored. It attacks the recently historic greed of Wall Street with a single one-liner joke. It engages corporate malfeasance with plot-specific boardroom politics. It considers class anger with a righteous glare from Selina, and half a movie later critiques it with wish fulfillment. Bruce Wayne is a richie rich who is too self-involved to notice that he's not helping the less fortunate anymore.

Ultimately, DKR sets up the circumstances of modern America — a clean city basking in victory, organized crime ostensibly crushed but actually legitimized by the establishment, the sanctity of sanitized living protected, and the utter decay that no one above ground sees until its too late — and then tears it all down. It recognizes the righteousness of the cause of the Occupy movement but warns (not subtly) about co-opting influences and that revolution is dangerous and uncontrollable. I appreciate that the warning is directed both to the power brokers and the disenfranchised. (And it even provides a moral road map of sorts with the dispensation of the Wayne estate.)

Ultimately, Nolan's Batman movies preach anti-extremism, be it in personal behavior or institutional controls or societal response to pressure. It was building for three movies, but that theme is finally elicited in DKR.

*DKR isn't without goofiness. All of the city's cops are trapped in the tunnels? #CmonSon. I'm also not 100 percent sold on the artificiality of Tom Hardy's voiceover work. It clearly didn't emanate from inside the environment in which the character was standing. A foible, though.

*The plot bigness of the last third of DKR impressed me. You likened Bane to a Bond villain, and that works for me. DKR was committed to the enterprise of isolating and destroying Gotham; from then on, that's what the movie was about. It wasn't a plot contrivance, a la the ferries in DK. Clearly, I did not like the ferries.

*Anne Hathaway is splendid. Like you, I wish there was more of her.

*Best of all in DKR is Christian Bale. The brothers Nolan finally got back to the business of giving Bale something to do and making a movie about his character. Batman Begins was a great Batman movie. The Dark Knight was a great Joker movie. The Dark Knight Rises was a great Bruce Wayne movie. Wayne is the most interesting of these characters to me, and DKR delivers him and his conflicts. In retrospect, DK seems like a plot placeholder to explore some other stuff until Nolan got back to dealing with Batman and how he's going to end up.

*The ending. I know it didn't work for you. But it works for the movies, I feel. If you step back and look at where things were pointed since the first film, this is it. Nolan was always only interested in telling this arc, and the question he's been asking from the beginning is, was Bruce Wayne doomed when his parents were killed, or can he be redeemed and find life after death?

In light of this and how DKR ends — Nolan doesn't care about where the franchise goes from here, because he's told his Batman story how he wanted to — it retroactively makes the whole series more satisfying. All the major character deaths, the villains faced and defeated and not heard from again, they're all bricks in the wall to where Nolan wanted to take Bruce Wayne. Now, Al Ghul's and Dent's deaths aren't so troubling from a continuity standpoint. They served their role to develop Bruce Wayne's character.

In a no-supernatural Batman tale, where Nolan explores with relative realism what would happen if this really happened, the series ends how it really would: Wayne too physically, mentally, and emotionally depleted to go on. I don't even think Blake taking the reins from Batman at the end is where Nolan is saying the franchise should go from here. It's a red herring. The next movie isn't necessarily Blake as Batman 2.0 or Nightwing or whoever. That's just how this trilogy ends according to its own internal logic: Batman is replaced. It's not a real-world business decision or studio decision, it's a Christopher Nolan filmmaking decision.

DKR sticks the landing and is immensely satisfying. But hey, I'm just a "comic-book partisan and Batman-mythology diehard." Why don't you just come out and embrace the pejorative subtext? I'm a fanboy.