History was made last Saturday. Every week on Memphis Sport Live (Sports56/87.7 FM), hosts Kevin Cerrito and Marcus Hunter play "Hang Up and Listen," where they take a sports-related question from a listener, who has to say the magic phrase "I'll hang up and listen" and then do just that.

What happened last Saturday is that they got the best question in the history of the segment. Adam called and said, "The budding new superstar of the Grizzlies, Tony Wroten, it's been said he looks like Don Cheadle. So if you have a movie about the Memphis Grizzlies, who's going to play each of the starting five and Coach Lionel Hollins? I'll hang up and listen."

That, friends, is how it's done. What a great question. When my wife and I heard it, we basically high-fived and went into action, pulling up pictures of the roster online and brainstorming a cast. Cerrito, Hunter, and producer C.J. Hurt made their cases for key roles, and I went on air about 30 minutes later and presented my own cast.

You can hear it all here, on the MSL podcast.

Below is my official cast for Memphis Grizzlies: The Movie. After much thought, I've made two changes to the lineup first given on air. Alert IMDb.com! The roster is presented as a slideshow, with the actor to the left, the Grizzly to the right, and my comments below. I also added the cast for the front office. Who will play John Hollinger? See the slideshow to find out. (Also see who original MSL caller Adam, a.k.a. @ajr7926, says should play Robert Pera.) And very special shout-out to Matt Wiseman, who made photographic mash-ups happen. 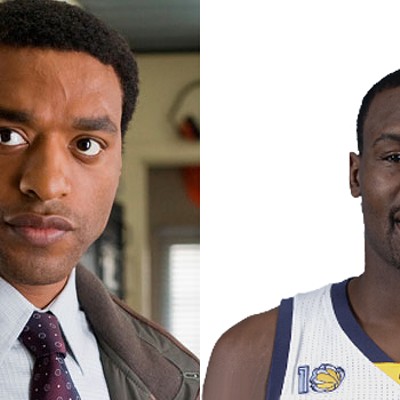 So, step into the casting director's chair: Who you got?

Note: I appear on Memphis Sport Live on the last Saturday of each month, talking movies, TV, and whatever happens to be in the news. I also do a lot of Oscars stuff, and my appearance next month (February 23rd) will be on the hour-long Annual Academy Awards Handicapping Show. Last year we also had special guest and Oscar winner, Frayser Boy. It was awesome. You should listen to that show, and all editions of Memphis Sport Live.