Sing All Kinds has a meme alert involving Dana from Homeland (played wonderfully by Morgan Saylor).

Many people hate Dana. It's a thing. I actually like her, but just not on Homeland. Spin her off. Let her get into hijinks that don't involve national security — or that do, but don't have anything to do with Carrie and Saul. I'd love to watch Dana try to date boys in the insular, inside the Beltway District of Columbia. What happens when Dana dates the Muslim son of the Iranian ambassador? How does her Mom feel about that? I'd watch that.

Until then, we'll just have to amuse ourselves with Dana memes. Interestingly, her image is finding purchase in the pop cultural Zeitgeist ancillary to college football.

I wrote the cover story (plug, plug) in the November Memphis magazine, on the Grove scene in Oxford, Mississippi, during football season.

A sharp-eyed reader — Flyer Managing Editor Susan Ellis — noticed something odd on the Memphis magazine cover, and paired it with a Tweet she saw last weekend.

It appears Dana is on the cover of Memphis magazine. Play Where's Waldo? and see if you can find her, or just take a gander below: 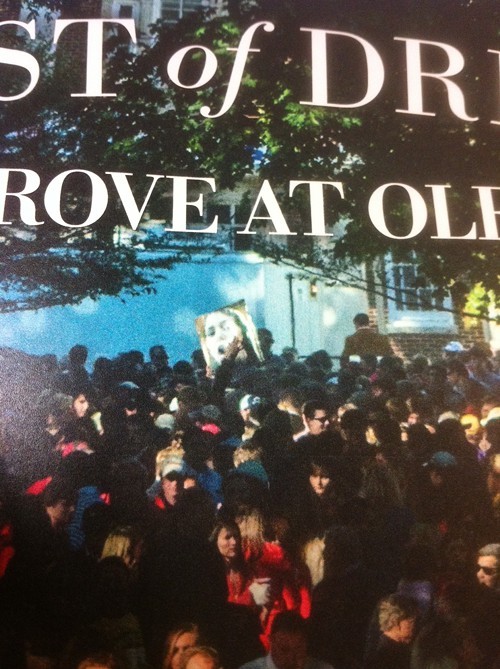 So, someone appears to have a large poster of Dana in the Grove. Homemade signs are nothing new to college football, of course. Not even when they feature idiosyncratic subjects, such as Dana from Homeland.

The art of homemade fan signs finds its ultimate exhibition on the set of ESPN's College GameDay. For the more casual fan, it's just as entertaining to spot the signs in the background of GameDay as it is to hear the talking heads blather. GameDay is like MOMA for homemade signs.

Last weekend, GameDay was in Tuscaloosa for the LSU-Alabama tilt. The folks at the Twitter account @LostLettermen noticed Dana in the background, behind Kirk Herbstreit. 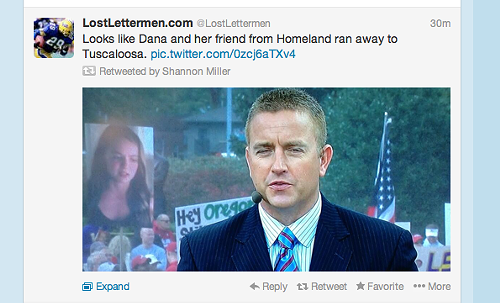 One is a coincidence. Two is a trend. Anybody know of any others? Or why this is happening in the first place (other than that it's awesome)?

UPDATE (6:27 p.m.)
It wasn't until the drive home that I realized the obvious connection between these two photos (I'm no John Nash). Though one was in Oxford and the other in Tuscaloosa, the home teams shared a common visitor on separate game days: LSU. I'm gonna conjecture that the anonymous Banksy behind the Dana sign is a Bengal Tiger.