We talk to the man himself, Lafayette Draper

Last week, we learned that Lafayette’s Music Hall will return to Overton Square. Loeb Properties has leased the site of the venerable showcase theater to Beale Street Blues Company. Lafayette’s was short lived but looms large in the mythology of Memphis music.

The club was something of an afterthought for Overton Square developers Ben Woodson, Charlie Hull, Buck Doggrell, Jimmy Robinson, and George Saig. The club was named for legendary bartender Lafayette Draper.

“I knew them all,” Draper says. “They decided to name the club after me because I was familiar with everybody.”

Draper was not a partner in the bar. Having other jobs, he had to keep his association something of a secret.

On a side note, Draper furthered his reputation as a pioneer with Lafayette’s Corner when Beale was first developed.

Lafayette’s is famous for booking acts that later went on to huge successes. Billy Joel has credited the club and Memphis for his breakout success. The club was part of a circuit, according to Jerry Swift, who booked local talent for Lafayette’s and opened his own club, the Ritz Music Hall, when Lafayette’s closed in 1975.

The bands that came through were part of a showcase circuit.

“They would start up at the Bottom Line in New York or the Cellar Door in DC,” Swift says. “And then come down the East Coast, the Great Southeast Music Hall in Atlanta, the Exit Inn in Nashville. They’d come in to Lafayette’s and when it closed to my place, the Ritz. Then they’d head to New Orleans and then to Armadillo World Headquarters (in Austin).”

It was another time altogether for music.

“Groups wanted to come here because of the power of FM100 at the time,” Swift says. “If they could get airplay and an add at FM100 — which is what made Billy Joel come back so many times. FM100 was a major powerhouse and AOR. If you got added at FM100, you got added at stations across the Southeast and all across the country.”

Lafayette’s only lasted from 1973 to 1975. But the square endured for a few years after that, leaving an impression on the minds of Memphians who appreciated a place to enjoy themselves.

“It was strange in the fact that it never set out to be a club,” Swift says. “The club never really had managers, etc. They didn’t have a kitchen. It was small, two story. They could max it out around 300 people. It was the ’70s and we had very cooperative state government officials, as well as local mayor Wyeth Chandler. People didn’t crack down on stuff like that. Lafayette’s was kind of an annex to Friday’s. They’d sent someone over there to manage the place, a few bartenders and somebody to book the place. Then it got to taking off.”

Jack Phillips of Beale Street Blues is excited to be moving into the Overton Square resurgence and sees the bar appealing to a wide range of musical patrons. People who have complained about late start times and band P.A. systems will find solace in the plans of the new proprietors.

“We’re still designing the logo,” Phillips says. “I hope to have Tab Beniot and Kermit Ruffin come up. We’re pretty open to what will be playing. Earlier in the evening, we’ll have an acoustical set or a trio, something a little quieter for the dinner crowd. Where people can hear each other talk, bring the kids, and have fun. Later in the evening, it gets a little louder, a little more involved.”

Lafayette Draper is proud to see his name returning to the Square:

“It made me feel good just to use the name. What made me want to do that was … I remember one of the tax collectors in town after I came out of the Navy — my dad was a bartender at the American Legion — he walked up and told me I wouldn’t be a better man than my daddy. I told him I might not be a better man, but I’d be a good man. And I’m going to make my daddy’s name known. That was one of the things that made me go on as strong as I could. I am just so proud of the name Lafayette. Sure am.” 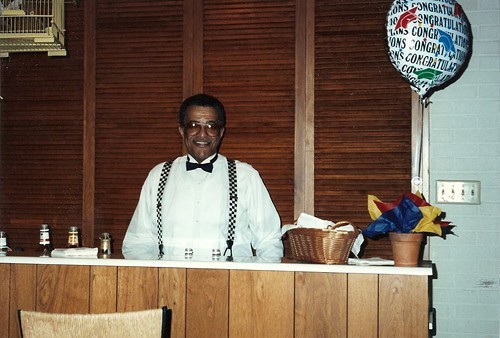