Man Is Wolf to Man

Martin Scorsese’s The Wolf of Wall Street is not only his best film in nearly two decades, it reminds me why I fell so hard for Scorsese’s movies (and movies in general) in the first place. Like Casino (1995) and Goodfellas (1990), Wolf is an exuberant biopic/amorality play about an ambitious, charming cad who figures out that a life of simple pleasures and modest means is for suckers and decides he’s gonna do something about it.

Leonardo DiCaprio plays Jordan Belfort, a young stock trader who loses his job and his dreams on Black Monday but tunnels his way back into the kingdom of high finance through an unbeatable combination of rage, salesmanship, bald-faced lies, and criminal conduct. His “partner” is Donnie Azoff (a magnificent Jonah Hill), a sycophantic, cousin-marrying goon whose “phosphorescent white teeth” conceals both a gargantuan appetite for sex, drugs, and money and a similarly misaligned moral compass. 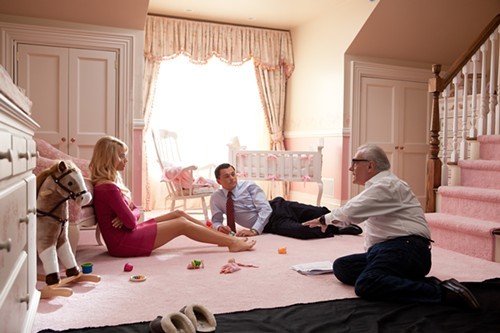 Together they accumulate enough unimaginable new money to draw the interests of both shoe impresario Steve Madden (Jake Hoffman) and FBI agent Patrick Denham (Kyle Chandler). Belfort’s initial meeting with Denham is one of the film’s many satisfyingly rich and tricky scenes.

As Belfort grows wealthier, his attempts to stay one step ahead of the law assume picaresque dimensions. He hits on his wife’s sexagenarian aunt; he has a telepathic confrontation with a slimy Swiss Banker; he forces the captain of his yacht to sail into a Perfect Storm-sized storm that nearly gets everyone killed. In the sequence of the year, Belfort, incapacitated after ingesting some legendarily powerful Quaaludes, tries to open the passenger door of his white Ferrari with his feet.

Belfort describes his ideal clients as the white whales of Moby-Dick, but his shallow, seductive American Dream is pure Great Gatsby.

I know it may be a little late for such proclamations, but The Wolf of Wall Street is one of 2013’s best films.