Ladysmith Black Mambazo will perform this Friday, January 24th, at the Germantown Performing Arts Center.
If you only know them through Paul Simon, there’s lots of great music in the South African tradition that you may find even more compelling. Let’s look at LBM in context for a wider appreciation of this form. 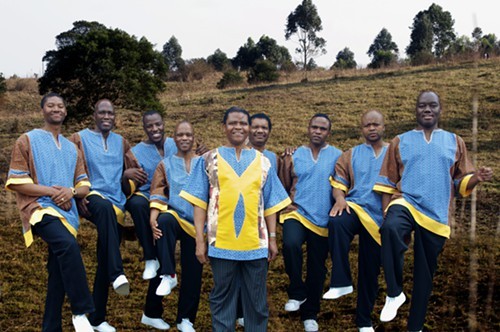 Mbube means “lion” and is the Zulu vocal tradition that grew out of the mining culture of South Africa. Zulu workers sang four-part harmonies in the loping style that most will recognize from “The Lion Sleeps Tonight” by the Tokens, which is sort of the Pat Boone version of mbube. Pete Seeger didn’t really help things either by goobering it up with folkiness. Like most culturally based music, it’s work finding the source.

Solomon Linda is the Bill Monroe of mbube. That is, he’s the man who invented the form. His recordings from the late 1930’s epitomized a style that later became a form. The subform isicathamiya is the basis of Ladysmith Black Mambazo’s choral sound.

Solomon Linda and the Evening Birds:

Miriam Makeba’s version of “Mbube” demonstrates the durability of the form.

The economics of the mines are unchanged and the tradition continues to this day. Here is footage from a workers’ hostel where the choral and dance traditions are still alive.