For this week's Flyer, on newsstands today and online tomorrow, I wrote a story about the Hold Steady's upcoming show at the Hi-Tone (Wednesday, January 29th, 8 p.m.) and the impending release of the band's 6th album, Teeth Dreams (March 25th). Last week I conducted separate phone interviews with Hold Steady lead singer Craig Finn and guitarist/Memphian Steve Selvidge. As is the case sometimes with print, there was a lot of material from the interviews that didn't make it into the story, or that can be given some room to breathe with greater context. Yesterday I posted the Q&A with Finn. Today, Selvidge is on tap.

Memphis Flyer: What part of the world are you in right now?
Steve Selvidge: I'm on the phone from Brooklyn. We're taking a week to rehearse. We recorded Teeth Dreams last summer, played some shows in the fall, and took the holidays off. Now we’re getting together and playing all the songs on the new record we haven’t played since we were in the studio.

How does everything sound live?
Great. It’s going really well. We played Monday [January 13th] and we took all day Tuesday [January 14th] for photos and played again Wednesday [January 15th] and it still sounds good.

Before the show in Memphis, will you do some rehearsing down here?
We’ll do 3 or 4 days in Memphis working on stuff, then we’ll do the soundcheck at the Hi-Tone, play on the 29th, and go on a 10-day run from there.

You have toured with the band for a few years, but this was the first album you recorded with them. How was the experience in the studio?
It was great. I joined in March 2010 right before the last record [Heaven is Whenever] was released. We toured with that, and obviously I’ve learned a ton of back catalog as well. It became apparent I’d worked out with the band, so we started writing and I was bringing in material. We’d play some songs live and some not and wrote the material. We had a bunch of stuff, and finally the producer [Nick Raskulinecz] came and said, 'Why don’t we do these songs?' so from then on we worked on those. It was great being part of the writing process and part of the band. I’m enthusiastic about getting back on the road and touring a record that I was a part of. 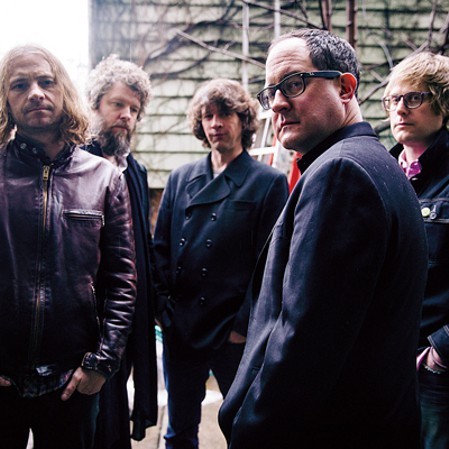 Do you prefer performing live to working in the studio?
I like them both. I see them as two different facets of making music, and I just like making music. I’m glad to be able to do both.

Is there anything in the recording process that was different than anything you had done before?
Our producer, Nick, is probably the most high profile producer I’ve worked with. And he was great. I really enjoyed working with him. I’ve done a lot of studio work, so the big thing was it had been a while since I’d been in the studio with a band I was in rather than coming in as a studio musician. It was a lot of fun.

How does Teeth Dreams sound different from previous Hold Steady albums?
I think it sounds like us because of the people involved. It’s definitely an aggressive record. it’s part of the evolving sound of the band. It’s different because there are two guitars players now. it’s a continuation of the natural sound of the band. I think it’s a good mixture of Craig’s vocals, his singing and spoken word. There’s a good balance.

When you were writing songs, did you feel a pull to try to write something that sounded like a Hold Steady song?
No. I wrote what felt natural. Certainly I wasn’t going to write a straight country tune? [He laughs.] But I was conscious about not trying to copy a Hold Steady song. I wrote, and if it felt like something that would sound good with us, then I would bring it to the table. Some things work and some don’t. We had a ton of songs flying around, and it was a case of whatever sticks. I didn’t want it to be an imitation of the Hold Steady. I just went with my gut.

Al Gamble [keyboardist from Memphis] plays on a few tracks and obviously it was recorded in Franklin, Tennessee. Are there other ways that the album is influence by Memphis or Tennessee or things you brought to that someone local listening to it might hear that little musical quote?
I would have to leave it to the listener. Quite a few songs were written in Memphis awhile ago. While Craig was doing a solo tour, the rest of the guys came down to Memphis and we worked up songs in my studio at home. They came in one week in February 2012 and one week in March. We all camped out at my place and just wrote and arranged. So we were out and about in Memphis a bunch. So maybe the environment influenced that, I don’t know. My voice being in there is part of it, so whether or not that’s a Memphis thing remains to be seen.

And of course a lot of Hold Steady songs have references not only to other song lyrics but to riffs from classic rock songs. Are there artists or songs that you brought into the mix that you make a knowing reference to?
Tad [Kubler] and I always had similar influences. But definitely he feels one way about where we might put things harmonically sometimes, and I'll feel things another way, and luckily those two things mesh really well. We did a lot of writing and arranging our two guitars parts to make it one big guitar neck. But when we did overdubs of guitars, we did them all together, the two of us playing together. So you can feel us playing off one another. What we’re coming up with is the end result of our influences together.

Before you were in the band, I presume you were a fan — How did you meet up with them?
Yeah. I was in a band the Bloodthirsty Lovers with Dave Shouse. I joined them in 2003, and we were on the same label as the Hold Steady, Frenchkiss. We did some tours togethe, such as at SXSW. I met those guys there, and Tad and I got to hanging out, both guitar players, and we found out we’re like 5 hours apart in age. So we bonded on that and kept in touch. There came a time the Hold Steady were looking for another guitar player: the keyboard player [Franz Nikolay] left, and they were in a transitional phase. They approached me and it worked out, so, here I am.

Circle back to Al Gamble. Did you want to bring him in, or was there a certain sound of his you wanted?
I’m a huge fan of Al, and obviously I’ve played with him a lot. We were in Franklin, just 3 hours away from Memphis, and we came to a spot where we needed to put some keys on it beyond what me or Tad or the producer could play. We needed a real keyboard player. And I said, 'My buddy Al Gamble is just down the road and he could do it.' He came in and kicked ass, and it was done in a matter of hours.

Your tour is a 10-day run?
This will be to get everything greased up and make sure it’s working well. The record comes out in March, then we’ll just be off, touring. But this is a 10-day pre-release tour to make sure everything works.

Are you looking forward to debuting in Memphis on the tour?
It’ll be fun. It’s super cool for the guys to come down, and it’s great for me to start there. We haven’t played in Memphis since 2010.

When theyre in town, are there certain places you take them to?
Oh yeah, most definitely. Everybody’s into food, so Cozy Corner is a must. All the great Vietnamese, like Pho Hoa Binh. This time around if I can get into Gus’s we'll go there, and I want everyone to have a Top’s cheeseburger.

Oh yeah, I love a Top's burger. Do you put barbecue on top of it?
No, I don’t. Usually what I’ll do is I’ll get the cheeseburger combo and then get a small barbecue sandwich; it's like a beer and a shot. I don’t know which one is the beer and which one is the shot.

I hear your wife is expecting. Congratulations with the baby on the way.
It’s a year of releases, what can I say?