Another Bonnaroo for the Books

The 13th annual Bonnaroo Music & Arts Festival rolled through Manchester, Tennessee, last weekend bringing more than 80,000 music lovers and fortunate freaks to the small town for four days of live music, comedy acts, and tons of fun on 700 acres of Tennessee farmland not too far from Memphis.

With a lengthy bill of acts performing across several stages, no two Bonnaroo experiences are the same. And with overlapping band performances (and lots of walking to get from stage to stage), it’s difficult to be everywhere you want to be. But Bianca Phillips and I took in as much as we could. She’s posted a photo slideshow for your enjoyment, and here are some highlights from my adventure on the farm, in no particular order.

Memphis had a strong presence at Bonnaroo this year, starting with a special screening of “Take Me to the River” in the festival’s Cinema Tent on Thursday afternoon. Produced by Martin Shore, Cody Dickinson, and Dan Sameha, the film celebrates the inter-generational and inter-racial musical influence of Memphis in the face of pervasive discrimination and segregation. It features multiple generations of award-winning Memphis and Mississippi Delta musicians including William Bell, Mavis Staples, Otis Clay, Lil P-Nut, Charlie Musselwhite, Bobby "Blue" Bland, Yo Gotti, Bobby Rush, Frayser Boy, The North Mississippi All-Stars, and many more.

A Memphis treasure, Valerie June, performed to a modest yet fully engaged crowd at one of the event’s tent stages, This Tent, on Saturday. Enamoring the audience with her sweet Southern drawl, June shouted-out to Memphis a few times, noting that some of her songs began as earworms that she sang to herself while working at the herb shop, Maggie’s Pharm, and cleaning houses in Memphis just three years ago before she hit the big-time. Her brothers, Patrick and Jason, who she grew up singing with in church, took the stage with her and provided back-up vocals through several songs. She pulled out her “baby” — a Memphis-made banjo — for a few songs as she worked her way through many of the tracks on her breakout album Pushin’ Against a Stone, including “Workin’ Woman Blues”, “Somebody to Love”, and “Tennessee Time”.

Memphis’ own country-punk rock band Lucero played an early afternoon set on Sunday, but sadly I was unable to catch their performance. I’d be willing to bet they represented us well.

A personal favorite, New York-based indie/electro/pop duo MSMR — who also performed at the 2014 Beale Street Music Festival — played to a bursting-at-the-seams crowd at one of the festival’s tent stages, The Other Tent, Thursday night. The animated, pink-haired lead singer, Lizzy Plapinger, flitted across the stage, ecstatically powering through tracks from their 2013 debut album, Secondhand Rapture (including my favorite, “Dark Doo Wop,” which wasn’t included in the BSMF setlist). Before the set’s end, the duo’s other half, Max Hershenow, said to the crowd, “This is only our third year as a band, so we’re really fucking happy you’re here seeing us! Thank you so much for this!”

Bonnaroo is as much about discovering new music as it is about seeing your favorite bands, and this year, I discovered a gem. Though I had heard a song or two of theirs in passing before the festival, the Scottish, female-fronted electro-pop trio Chvrches drew me in with its shimmering synth and the delicate and melodic vocal stylings of the seemingly shy singer Lauren Mayberry. Mayberry spoke demurely to the audience between songs, once commenting on the variety of silly signs and flags jutting up from the crowd (I spotted an oversized Jack Nicholson head on a stick and a Kanye-heckling “Gay Fish” sign): “What is all of this stuff you guys are holding up? [Pointing at one of them] Is that supposed to be a dick?”

Adding to the list of female artists I enjoyed at the festival (I promise I didn’t just see the girly stuff), Fugees alumna Ms. Lauryn Hill performed a powerful set on Saturday, also at The Other Tent. Many audience members had camped out for hours to make their way to the front, and some had to be pulled out and over the front railings by security, as they were overheating waiting for the delayed set to start (nearly 30 minutes later than scheduled). When Hill arrived on stage, she and her backing band rocked out a cover of Bob Marley’s “Soul Rebel” and followed with revised versions of well-known tracks, including a reggae rendition of “Killing Me Softly” and a disco-inspired version of “Everything is Everything”.

And finally, the male-led groups! Atlanta-based metal band Mastodon performed a mind-melding, impossibly tight set at This Tent on Saturday. But not before the Flyer ran into them that afternoon in the press area. Guitarist Bill Kelliher has a Memphis connection, having been tattooed by Babak Tabatabai, owner of Ronin Design & Manufacturing on Broad Avenue. We chatted with Kelliher briefly, and he says they’ve been super busy touring. Not surprising since their new album, Once More ‘Round the Sun, is set for release later this month.

I caught the last few minutes of a chaotically energetic performance by Cage the Elephant. After recovering from (apparently one of many) technical difficulties (during which the band casually played riffs from a hip-hop tune), singer Matt Schultz danced around the stage before saying, “We have mostly been Cage the Elephant. We were briefly Dr. Dre. Now we’re back to Cage the Elephant.” During the last song, Schultz insisted on crowdsurfing despite security’s efforts to keep him on the performers’ side of the railing. He climbed over, more than once, at times standing upright on the hands of the eager crowd and came out mostly unscathed besides losing a shoe.

With all of the good music happening from sun up ‘til sun down, it was hard to catch every set, though I did also see a few minutes of Lionel Richie (“Easy Like Sunday Morning”!), Bobby Womack (“Across 110th Street”!), Cake (performing all the classics), and others. Another successful Bonnaroo for the books! 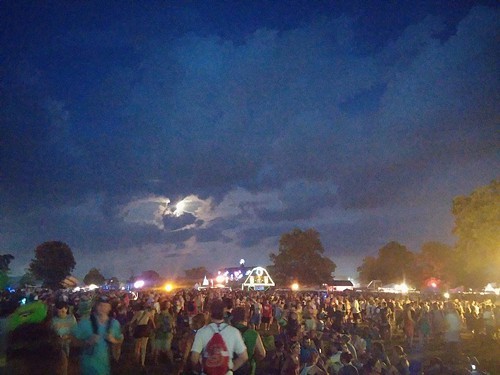