For those looking for something heavier than Katy Perry’s Prismatic World Tour, post-hardcore local NEEV will be opening for Aviator and Rescuer as they make their way through Memphis on their “Death-to-False Music” tour. While both touring bands have recently released records on No Sleep Records, NEEV put out their first full-length album Those Things We Tomorrowed on cassette in May through Ireland based ndependent label Little League Records. The post hardcore outfit combines melodic math rock with chaos, and while no song meets the three-minute mark – they are each packed with unpredictable twists and turns that keep you on your toes. This is not a band to ignore.

d and the Heart with Rayland Baxter

On The Head and the Heart’s sophomore release Let’s Be Still, they managed to capture a sense of sincerity that is often lost in the now saturated indie folk genre that has grown popular over the last few years. This is serious, heartfelt songwriting. Perhaps it’s the band’s humble beginnings playing on street corners that separates them from the rest of the crowd. Without a doubt, their live show is less of a concert and more of an experience that will pull your mind away from Memphis for the evening and take you somewhere special.

Berkano is everything that is right about garage rock. The guitars blend distortion and reverb while the vocals lazily echo their way into the mix. It’s beer-drinkin’-head-bobbin’ rock ‘n roll, and you’d be silly not to come pick up a copy of Santa Sleeping. Ugly Girls are also not to be missed. The three-piece punkers are unapologetic. They sing songs about hating “frat boys” and being gifted cancer from God. You can find more of that on their EP Bad Personalities that they released in February.

Juicy J has risen far beyond Three 6 Mafia fame, making his way to the soundtrack of the latest reboot of Teenage Mutant Ninja Turtles. Now, he’s rapping alongside Miley Cyrus and is an active member of Wiz Khalifa’s Taylor Gang. His third studio release Stay Trippy featured the radio favorite “Bandz a Make Her Dance,” and landed at 29 on the Billboard Top 100. J and his older brother Project Pat will be returning
to Memphis with some new, and, fingers crossed, hopefully some of the old iconic sounds that defined Memphis rap from the ‘90s to late 2000’s. If we’re lucky, maybe we’ll get to hear some classic Three 6 Mafia tracks.

Interpol didn’t reinvent the wheel with their nearly brand new release El Pintor, but after four years, it breathes life into their tired, old routine. It’s reminiscent of Turn On The Bright Lights, the album that launched them into the spotlight, and is arguably the best thing the band has released since Antics. With bassist Carlos Dengler having the left the band, the former four piece is now made of three, which is not at all a bad thing. Interpol is playing like a band in their prime again, and the energy of their live show may very well be the best that it has been in quite some time.

Richmond, Virginia’s Slugz plays raw, punk music that gives show goers a reason to thrash their bodies against each other. Local punkers Gimp Teeth merge power violence with surf rock to create a sound that belongs in a Harmony Korine film. They recently played Gonerfest 11 and released an EP titled Naked City earlier this year.

Jack Oblivian and Monsieur Jeffrey Evans have spent decades creating and cultivating a sound derivative of blues and punk that has forever left a stamp on Memphis music. On Oct. 18, the two will share the stage with a batch of Southern musicians. If you can make it to only one show during October, this is it.

Dallas Green’s distinguishable tenor and stripped down, acoustic structure coupled with his sentimental lyrics and catchy melodies have carried City and Colour from a small, independent band with a cult following to a household name, selling out venues all over the country. His latest release, The Hurry And The Harm, sees
Green moving into the mainstream with additional musicians and even poppier sensibilities. More recently, Green released the single “You and Me” with Pink, and the two have formed a duo under the same name with plans to release an album titled Rose Ave. While Green’s place in the indie music world seems to be ever growing, he hasn’t lost sight of the intimate performances that define City and Colour’s live show, and you shouldn’t miss out on it, either.

9. Dead Soldiers with Clay Otis and James & The Ultrasounds

Dead Soldiers are one of the most hardworking bands out there – playing a brand of alternative-country that is similar to no one else in Memphis. The Soldiers are packing out every show they book, and for good reason. For a relatively new band, 2013’s LP All The Things You Lose and follow up EP High Anxiety are impressive, to say the least. On Halloween night, they will play alongside local pop singer Clay Otis as well as James & The Ultrasounds, whose first full-length Bad To Be Here is due out through Madjack Records in December. The Hi-Tone will also hold their annual costume party, where they will choose the best dressed male and female who participate. The winners get free admission to The Hi-Tone for a full calendar year. 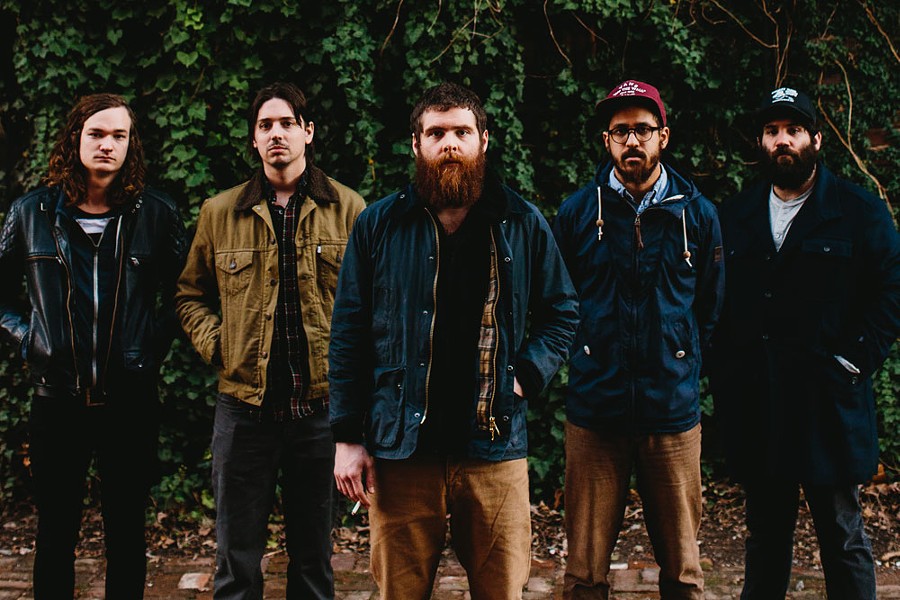 The last time Manchester Orchestra came to Memphis, it was a cold February evening in 2010 at The New Daisy Theatre. The Atlanta-based rock quintet was touring heavily on their sophomore release Mean Everything To Nothing, and they were just on the cusp of the success that would carry them through 2011’s Simple Math. After releasing 2013’s COPE, an 11-track album that capitalized on the huge guitars and roaring vocals of Frontman Andy Hull that have come to define Manchester Orchestra’s sound, the band later released a stripped-down album entitled HOPE featuring alternative versions of all 11 songs accompanied with a string of stripped-down tour dates. When Manchester Orchestra comes back to The Daisy, it may be the first and last time we get to see the band abandon their amps and tone down their songs.