It’s exceedingly rare for a, ahem, “rock writer” such as myself to be afforded the chance to promote his own show, but in this circumstance, it seemed like the most viable option. After all, it is a benefit show I’m promoting, and the beneficiary of said show is my lifelong friend and mentor, Bob Holmes, who was hit by a truck roughly six weeks ago while riding his bicycle home from work. He suffered a broken arm, a fractured pelvis, and numerous smaller injuries and complications, and has been unable to return to work or even play guitar since. Now, of course, the bills — both medical and personal — are piling up.

For those of you who don’t know Bob, he’s the guitarist and songwriter behind The Modifiers, one of the first punk rock bands to ever come out of Memphis, TN. The band was founded in 1980, when the Antenna Club was still the Well, by Bob and the group’s lead singer, Milford Thompson. Milf, as Bob still refers to him when he’s telling stories about the old days, was an incredible frontman — his stage antics are still legendary amongst those who remember. But just as important to The Modifiers’ sound were the blistering guitar licks and soaring pop hooks from Bob.

The band quickly developed somewhat of a reputation in town, you might say. Affectionately referred to as “the most hated band in Memphis” by Antenna owner Steve McGehee and others, The Modifiers were known as much for their wild spectacle of a live show and hard-partying as the music itself. But underneath the chaos, there were always really great songs. In Memphis, the band shared the stage — mostly at the Antenna — with Black Flag, Jason and the Scorchers, Mission of Burma, Bad Brains, The U.K. Subs and Flipper, just to name a few. 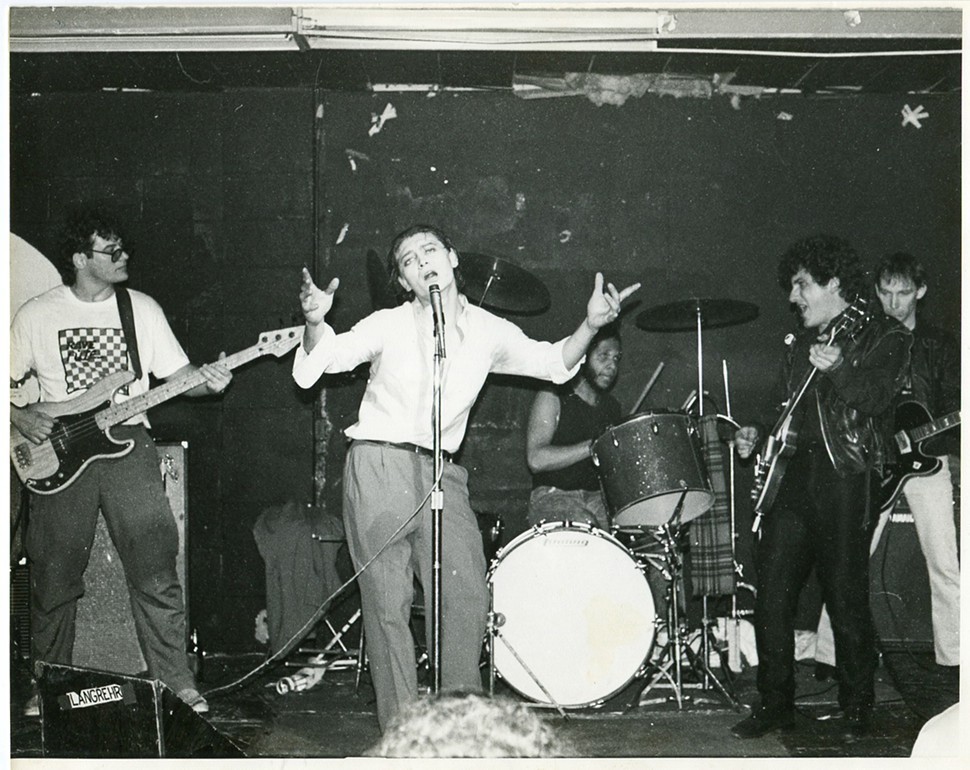 The band gigged around Memphis for a few years with a rotating cast of backing musicians that included (it is virtually impossible for me not to leave several people out here, and for that I apologize) Jim Duckworth, “Big” Dave Catching, Jaime Spencer, Alex Chilton, Ross Johnson, Marty Pendergrass, Doug Easley, Tommy Barrom and my father, John Paul Reager, before eventually re-locating to Los Angeles, CA in 1983. There the trio of Bob, Milford and Big Dave were joined by the unlikely rhythm section of John Densmore (yes, THE John Densmore, the drummer of The Doors) and Fear bassist Derf Scratch.

In L.A. the band shared the stage with The Circle Jerks, members of The Blasters and Los Lobos, and an early version of Pennywise, and self-released a now extremely hard to find single (financed by Densmore). Unfortunately, however, things didn’t end up panning out for the group out west in the long run, so Bob and Milford moved back to Memphis in 1990. After returning home, the band never really re-gained its momentum for a variety of reasons, and Bob and Milford eventually played their last gig together as The Modifiers at the Antenna Club in 1992.

Before and after The Modifiers, Bob also played with a TON of other local bands, including Sara and the Eyes, Angerhead, Potter’s Field, The Binghamptons, and Spitshine, which included my father and a 14-year-old me on drums. As I often like to brag, Spitshine’s first gig, which was also my first gig, was at the Antenna opening for The Grifters, one of my favorite Memphis bands to this day.

I owe more to Bob Holmes than I can say. In addition to getting me on stage in front of drinking adults for the first several times in my life, Bob has always inspired me. Much like how a young Julien Lennon preferred hanging out with his father’s buddy Paul (except nobody in this scenario is famous), I always looked up to Bob when I was a kid and thought he was cooler than my dad, who despite his stint in The Modifiers always preferred blues, jazz, and 60s rock to punk. In fact, my dad thought punk was mostly shit. Bob, on the other hand, was living it. He gave me my first punk record, a battered copy of The Dead Boys’ Young Loud and Snotty, which I still have. He wore a leather jacket in the summer and sunglasses indoors. He lived in L.A. and had (still has, really) amazing stories of the road and hanging out with rock stars. And maybe most importantly, he always treated me like I was part of the group, a friend, an equal - even when I was just a shy, naïve, dumb little kid. So, I always liked Bob, and I never would have become a musician if not for his influence.

Three years ago, when Bob finally said yes to re-forming The Modifiers with me, it was maybe the greatest thrill of my music career. Sadly, Milford passed away in 2002, and instead of trying to find a replacement frontman to “play” Milford on stage, we decided it would be best if Bob sang since they were mostly his songs anyway. We enlisted our friends (and arguably the best rhythm section in Memphis) John Bonds and Terrence Bishop to play drums and bass, respectively, and The Modifiers were re-born. I’ve probably never had more fun playing music in any other band I’ve been in, and I’ve been in a few.

Which bring us to now, the part where I ask you to consider helping out my friend. This is why Mr. Bonds and I set up a benefit show (it starts early! for real!) to help cover some of his expenses. Here are the details:

So, yeah, come on out and support a great musician and an even better human being. Please and thank you.