This weekend we popped by some Summer Avenue thrift stores for a gander at the bargain buys and vintage wear. Aside from a serious dearth of fitting rooms and one lecherous dude lurking around, we were not disappointed by what we found.

Memphis is a treasure trove of thrift stores, having not been totally picked over like some more hipsterish cities we could name.

We only snapped a few pics because we were in a bit of a hurry. But just look at what you can get out of a few minutes in Mid-South Outlet and the former Disabled American Veterans store, and imagine what treasures hours (and hours and hours) of thrifting can bring!

We stopped at the former DAV first (3440 Summer Ave.) It certainly isn't the same DAV Thrift Store you're used to. The furniture selection has expanded considerably, while the clothing section is significantly smaller. We aren't sure what the newest incarnation is called, so from here on out we'll be calling it the former DAV.

This sucker is pretty heavy, so it would be best on a sturdy kitchen counter or something similar, but it's amazingly in tact for just $50 and much more interesting than an average kitchen scale.

Nearby we spotted this vintage armoire:

It has some small scratches, and they're asking $199 for it, but it's sturdy. Plus, the woodwork is so pretty and we love the kind of Art Deco vibe.

In the chairs section we found this tall-backed green gem: 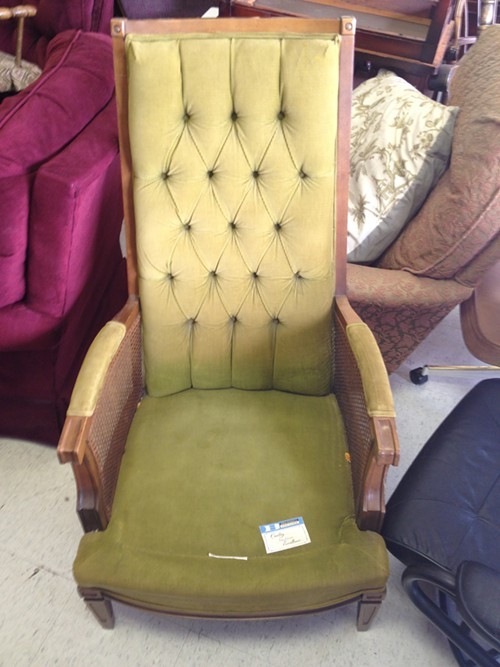 It's missing a seat cushion, but a contrasting fabric pillow looked nice in its place, and the rest of the chair is in tact.

A few feet away, this vintage folding chair ($95) called out to us. 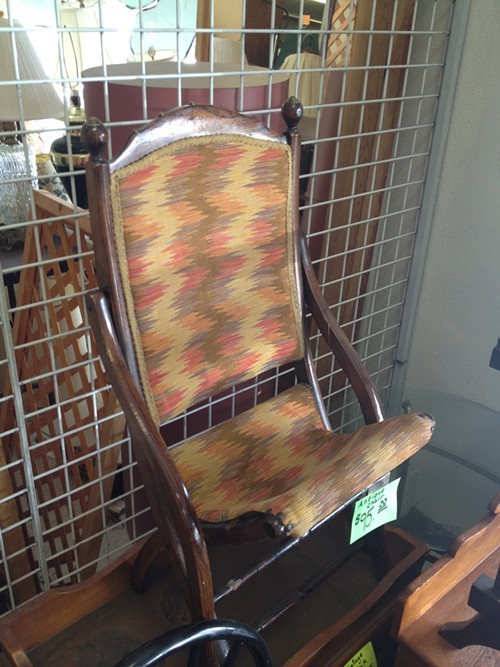 We couldn't actually reach the chair over all the other furniture in the way, but it had only a few small scratches, and you can always reupholster if that fabric doesn't suit you. (We kind of like it though...)

In the small clothing section, where everything was on sale for $2, we found this pair of EXPANDOMATIC pants, or as we like to call them here in the 21st century, stretch pants.

How the suffix "o-matic" survived Saturday Night Live's "Bassomatic" is beyond us. But apparently, these pants are still being made (google it!) and from our limited internet research, it looks like the patented Expandomatic technology is primarily used in men's slacks. Why the gender discrepancy? Ask your average man if he'd prefer "stretch pants" or something called "expandomatic pants" and we think you'll find your answer.

Next door at the Mid-South Outlet (3432 Summer), you'll find a much larger clothing selection and a much smaller furniture selection (they've got a yin and yang thrifting thing going on in this strip mall, and we're into it.)

Near the back of the store where the jewelry counter is, they've separated out a small vintage and boutique section. This is perfect when you don't feel like sifting through the dregs of the other racks, although not as rewarding as when you search the general ladies' section and find a rose among thorns.

We've found some amazing vintage coats in this part of the store, and on this particular trip, found a fur coat made in none other than Memphis, Tennessee.

We don't know where Motes Furs was located or what became of it, but our friend Vance Lauderdale was able to tell us that by the 1970s, this one-time furrier had reduced operations from making furs to simply storing furs for wealthy Memphians.

And since we were near the jewelry counter, we took the time to pick out a few bracelets before heading home:

The buckle bracelet and bangles cost me a cool $6 in total.

Got any thrift store finds you're particularly proud of? Send a picture and a few brief details about where you found your second-hand wonder to stylesessions@memphisflyer.com.