20twelve opened its doors just last month in the Broad Avenue Arts District, an area that reminded owner Chantal Johnson of New York City's meat packing district, which has been polished into an epicenter of fashion and culture.

“This area of town is so raw, full of self-starters,” Chantal says.

“I wanted to take this nugget of Memphis and make it high-end and modern,” says Chantal. “I love that we’re already being called Barneys on Broad.”

The name 20twelve signifies the year that her idea of a high-end lifestyle store conceptualized, and from the beginning, she had intended to bring a piece of New York City to Memphis. The boutique’s aesthetic is a “cross between Louis Vuitton and Tom Ford” to properly showcase designer names not heard of in Memphis. Many of the emerging designers are in America and out of Europe. Getting them signed on for the 20twelve concept proved to be less of a challenge than Chantal expected.

Working with the Doneger Group to procure designers, Chantal found that the one major factor that helped enlist these designers, particularly international ones, was location. “’Memphis is the center of the country,’ they would say,” she explains. “They were so excited to hear my story and excited that their designs would be accessible to many major cities — St. Louis, New Orleans, Atlanta.” 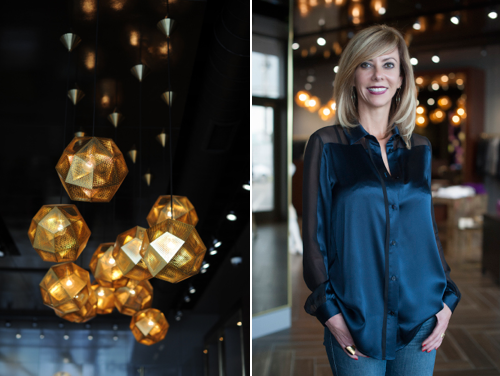 As a lifestyle store, 20twelve carries clothing and accessories as well as home décor and furniture. Chantal, a graduate of the University of Memphis interior design program and admirer of designer Tom Ford who himself crossed over from architecture into fashion, discovered the empty storefront on Broad while looking for storage space for an interior design project.

She and her husband Jeff purchased the space knowing it was almost in disrepair and that ownership would allow them to transform the space however they wanted. With ample square footage beyond the storage space she needed, the building underwent a huge renovation to become a jewel box showcasing both her passions of fashion and design.

Chantal teamed up with local designers Graham Reese for the interior design and Ben Fant of Farmhouse Marketing for marketing and branding. Her personal design vision is clear, though, in the overall design and in the details, as she points to the dramatic Tom Dixon light pendants hanging by one of the many sets of mirrors. The sparkling interior bounces light from wall to floor to ceiling.

Between these two screens, a chandelier of seed-shaped glass lights by OCHRE are stationed above a long table that Chantal explains might become an afterhours dinner table. Though this idea is still forming, a catering kitchen built in the back of the space is ready for these future intimate dinner parties. As a way to connect with her customers and for Memphians to connect, Chantal hopes to inject as much activity and positivity into Broad Avenue as possible.

See more of the interiors and items they carry in the slideshow below.

Slideshow A Look at 20Twelve