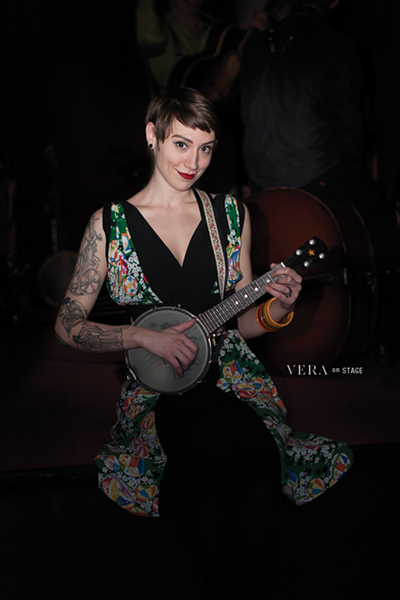 Today, we go from the porch to the stage to spotlight Vera and the Side Street Steppers, a band she founded with her husband Christian. According to their website, their music hasn’t been easily described. They play music from a historically large range of time they used to describe as pre-war. They cover many genres — “blues, jazz, country, hokum, jug band, fiddle tunes, and more.” The chosen description in short is “Vintage Music.”

“Vintage Music is old music, but not just any old music. Vintage Music is timeless, as exciting to listen to today as it was when first performed. This is the music of America, of all the people who have come and gone and contributed a verse to our national song. Collectively, it tells the story of who we are and where we have been—what we have endured and how we got through.” — Excerpt from Side Street Steppers website.


Recalling Vera’s story about falling in love with this style of music through dancing, there seemed to be a connection to dance through the band name the Side Street Steppers.

“So it seems like almost all the bands who play this style of music have band names based on the formula 'The Something Something Something-ers.' For example, The Asylum Street Spankers, the Jake Leg Stompers, the California Feet Warmers, and the Cheap Suit Serenaders. So, since Christian and I met and love dancing, we took Steppers. And because this music is a little off the beaten path, we decided Side Street, as opposed to Main Street.” Vera confirms.

To see them perform is to give in to dance-inducing music, at least by not resisting the urge to tap your feet or bop your shoulders. It’s natural that they are the live music you find at swing dances or parties. On a Friday night in February, the Side Street Steppers perform for the Red Hot Lindy Hop. Almost every Friday night, this local swing dance troupe takes over the Rumba Room downtown to give free swing dance lessons and hosts a good old-fashioned social around music and dance.

That night, Vera and Christian were joined by their original bandmate Nate Breckenridge filling in on upright bass and back-up musician Sarah Anne Rector on washboard. They play here again on May 8th. You’ll also find the band performing regularly at Central BBQ midtown on Wednesdays. The next upcoming event is this Saturday, May 2nd at the Tennessee Brewery Revival from 3 to 7pm.

“I love this event, and I've already been several times this year, so I'm really looking forward to performing there!” says Vera about the Tennessee Brewery Revival.

A brand new album is also in store for the Side Street Steppers. Their third record will be called If It Don't Fit, Don't Force It already recorded, mixed, and mastered. They just need your help getting the art and physical manufacturing funded. They are raising the last $2,000 on Kickstarter with 8 days to go. The campaign allows a pre-order of the CD with other rewards such as t-shirts and stickers. Click here to see the campaign and contribute.

Thanks everyone for following this week of style and special thanks to Vera and Christian for welcoming us in. Have a great music weekend!