A Look inside Oxn - A New Men's Clothing Store

In an unexpected part of the South Main district, 4-foot tall white letters “OXN” cover the glass of a previously empty storefront to mark the presence of new men’s clothing and lifestyle store. Oxn was recently launched by Zac Woolfolk as part of MEMShop’s latest initiative to activate a portion of the proposed Heritage Trail route with small business retail on South Second Street.

After applying for the MEMShop Heritage Trail inclusion in January of this year, Zac already knew he would carry brands he personally had been buying and wearing for years. Quality basics such as jeans and T-shirts would define the stock. He points to his first pair of Rogue Territory jeans displayed on Oxn’s back wall. The retired pair is well-worn and well-loved. The wear of his jeans demonstrates the nice fade, not evident when glancing at a fresh pair.

Rogue Territory and other brands at Oxn like Ewing Dry Goods and Apolis are not only high quality and functional but also meaningful to Zac. For example, he recently featured on his website the Apolis Market Bag that sources fabric from a co-op of artisan women in a rural part of Bangladesh, demonstrating their company name meaning “global citizen.” Zac’s care for the mission and story behind each brand drove his choices and eventually led to Oxn. It would be the only shop in Memphis to carry most of these brands.

In the spirit of MEMShop’s mission, Zac developed a name to the retail store that spoke of its potential in Memphis.

‘Auxin’ is a growth hormone in plants. I liked the idea of growth with my type of store in the city of Memphis, so I played around with the homophone and ended up with Oxn,” he explains. Looking ahead, Zac hopes to test out and carry more brands.

“Earlier this week I was introduced to the best T-shirt in the world made by 3sixteen. I was skeptical but 3sixteen proved me wrong. So I hope to be carrying those in the next couple of weeks.”

Zac also is looking forward to carrying another brand acknowledged by GQ in their Best of 2015 Designers of the Year, The Hill-Side out of Brooklyn, NY, for their use of fabric in men’s ties, pocket squares and scarves.

“I’m looking into other accessories and men’s goods. While I may not carry women’s clothes in the immediate future, unisex accessories is something that I plan to always keep in stock, as well. Scarves, bags, and I even had women’s perfumes, which have sold quite well,” he adds. 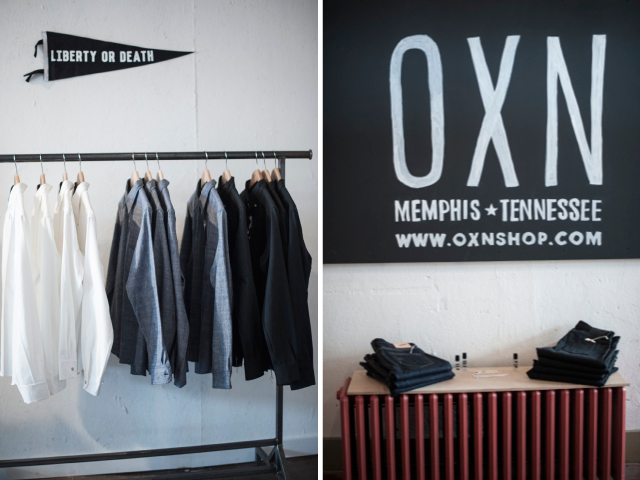 Oxn will be in the Second street space through October 31 when Zac will then decide on leasing it further on a month-to-month basis or find a more permanent space for his store.