Matt Barnes For The Win 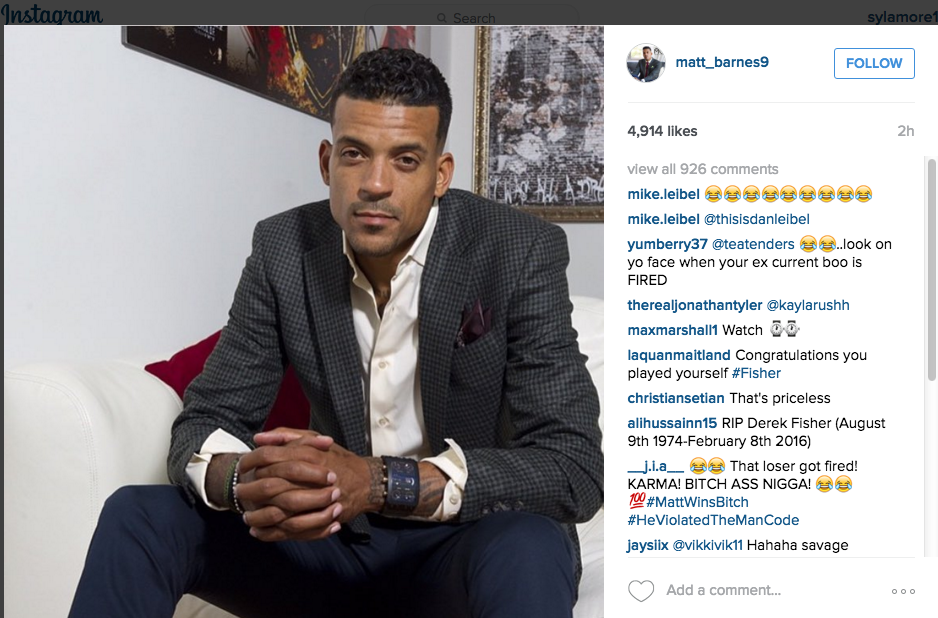 It's been said that revenge is a dish best served cold. Cue the Grizzlies' Matt Barnes, who on the occasion of New York Knicks coach Derek Fisher's firing Monday, issued this rather cold-blooded Instagram in response. It does not look like the picture of a man who is upset that his former coach got the ax.

The Twitterverse has had a field day, retweeting Barnes' picture along with lots of snarky captions.

Barnes posted the picture an hour after the news of Fisher's firing broke Monday morning. You may remember that Barnes and Fisher, who were teammates and friends while members of the Lakers, got into an altercation in October over Barnes' estranged wife, Gloria Govan. Fisher had begun dating Govan, and Barnes wasn't pleased about it.

Barnes was later fined $35,000 for comments he made before a Grizzlies/Knicks: “Violence is never the answer," Barnes said, "but sometimes it is.”

Barnes was also cited for writing on Instagram on New Year's Day: “being stuck in the ‘triangle offense’ w my ex & snitch, I mean former teammate & friend. Who went behind my back, messed w my ex, got caught, got dealt w for being a snake, then ran & told the Police & NBA.. Instead of taken that ass whoopin like a man & kept it moving….!

Cold. But Barnes seems a little more at peace today, to say the least.