The Dark Shadows of Lara Parker

With the release this week of director Tim Burton's film version of the classic daytime soap opera, Dark Shadows, we thought it fitting to catch up with Lara Parker, a Memphis native who starred as the witch Angelique in the original show. Parker appears in a cameo in the new film, which stars Johnny Depp as Barnabas Collins, a role originally created by Jonathan Frid.

At Burton's invitation, Parker reunited with Frid and co-stars Kathryn Leigh Scott and David Selby at Pinewood Studios in London last summer. The cult classic Night of Dark Shadows, a 1971 spin-off film, will be re-released later this year on DVD. Parker spoke with the Flyer about her cameo in the movie and her career. 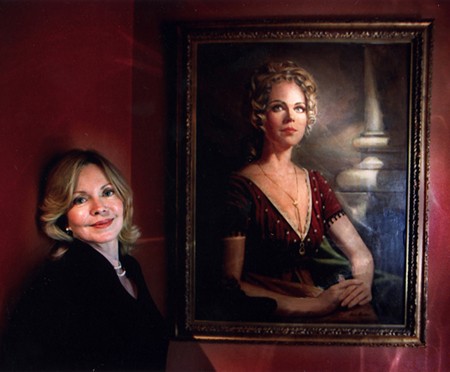 MF: In 1967 after moving to New York, you were cast as the witch Angelique on Dark Shadows.

LP: Yes, I was working in summer stock in Lock Haven, Pennsylvania, and decided to go to New York and try my luck. I got an apartment in New York, a charge account at Saks, and a part on a TV show. I thought I had arrived! At first, I didn’t like the role. Angelique was the bad girl from the wrong side of the tracks.

Your former co-star Kathryn Leigh Scott, who was mum on how your cameos fit into Burton’s Dark Shadows, has described your guest shots as the new film's “ah-ha” moment.

We were in London last summer, where she, Jonathon, David and I spent three days filming cameos for Burton at Pinewood Studios. It was wonderful, and the thing that meant the most was as soon as we walked on the set at Pinewood Studios, Burton and Johnnie Depp came over and were so welcoming. We so much appreciated all the kind words and tributes Depp has given the original show and were touched when he told Jonathan, “None of us would be here if it wasn't for you!”

Where did you grow up?

My whole family’s from Memphis. When I was a child I lived in New York City, actually Jackson Heights, and I went to a boarding school in Connecticut. I moved back to Memphis when I was 9. I spent my summers at camp in Hardy, Arkansas. Most of my weekends were spent at my grandaddy's cotton farm out in Shelby County, riding my horse Gypsy.

You were born Mary Lamar Rickey. What was it like to be associated with the legacy of your great-great-great grandfather Supreme Court Justice L.Q.C. Lamar?

Giving first names that are family names is something they do to girls in the South. All my friends and my children know me as Lamar. I wanted to be a “Judy” or “Connie.” Because of the street in Memphis named “Lamar,” it was painful as a child carrying a name I didn't like very much.

So, when you heard Johnny Depp was planning on doing the movie, were you thrilled?

I thought he’d be marvelous and bring a sense of humor; he’s kind of a rascal, and it’s a different interpretation of Barnabas. I think Depp brings something that’s equally remarkable. He said as a little boy, “I’m going to play that part some day!” and might be the best Barnabas of all.

How did Burton talk the original cast members into doing cameos in the film?

It wasn’t difficult! We were delighted to be included, and the fans love it! We have a huge fan base. When I look at how well my first book, Angelique Descent, has sold, I realize there are a lot of fans out there, and they’ll love the original actors in the new movie.

You shared with your mother, Ann Heiskell Rickey, an appreciation of writing. Did your family inspire you to write?

My mother was a member of the Film, Tape, and Music Commission and wrote a two-hour documentary on Memphis music and Beale Street. She recorded a lot of musicians through her company Reel to Reel. As for her book, Bugs & Critters I Have Known, I published it for as her Christmas present. I’d been so excited seeing my own words in print and wanted to give her that same gift. She was completely surprised! Bugs is selling well to school libraries and is the perfect read-aloud book for children. My mother was a strong liberal when it wasn't fashionable. She knew the Al Gore family and worked on the campaign of Congressman Estes Kefauver in 1948. She was a delegate at two Democratic National Conventions and ran unsuccessfully for the state House of Representatives on the “Green Light Ticket,” which challenged “Boss” Crump, and wrote for the Memphis Press-Scimitar a series of verses satirizing different officials in Crump's political machine.

First, 9/11 and then the illness and death of your father, attorney Albert Clifton Rickey, almost derailed your second novel and the completion of your M.F.A.

After 9/11, the whole idea of doing a vampire novel seemed trivial. I wanted to return to graduate school for my masters’ degree in creative writing, so I decided to make my second, long-delayed Dark Shadows novel one of my school projects. My husband Jim suggested I shelve the project. He said, “Blow it off. You don’t have to do this!” But, I applied to the fiction writing program at Antioch University and was rejected. They told me, “We’re really just not into the genre.” I tried again with some notes I’d written on my mother’s illness in 1999 and got accepted! Once in the program, I found the instructors’ attitude was just the opposite from my application experience. Then, my father died of heart failure in 2003. He’d been elected to the state senator in 1960 and served one term.

When did you start acting professionally?

I decided to become an actress when I was 9 and realized I couldn't sing or dance. I was very shy, but I was aggressive about getting in little plays or on radio, which I was doing at age, and I was working in the Front Street Theater in Memphis at 15. Later I worked college theater and after graduating from Rhodes College, was leading lady in summer stock in Wisconsin and Connecticut.

You played the love interest of David Selby in the film Night of Dark Shadows. How was making the film different from making the TV show?

Filming a movie’s more leisurely. Sometimes I sat around all day in make-up and never shot a scene. We had six weeks to shoot an hour and a half, which would have been done in three days on the TV show. David Selby was wonderful! He's still a very good friend and was a very good kisser.

Why did Angelique appeal to so many people?

Women identified with Angelique because the character had the courage to do what many of them couldn't do yet, what many of them would have like to have done, and the courage combined with the power to do it. The truth is Angelique got away with what other women could only fantasize about. She was smarter than anyone else. She became impatient with the rest of the world. Angelique's intelligence was an intelligence of cynicism. It wasn't a spiritual intelligence but was more one of street smarts in that she realized everyone’s greedy, but she was better at it than anyone, though she suffered in ways that made her even more determined. She learned from her suffering to be more ruthless. Angelique didn't “choose” to be mean; she simply was.

You left New York City after Dark Shadows. What did you next do professionally?

I went to California to play the part of the hooker in Save the Tiger with Jack Lemmon. I had two young sons and thought L.A. would be a better place for them to grow up. I worked a lot, made some nice money and bought a house, but never became a star.

Yet, somehow, Dark Shadows is indestructible.

It’s the show that refuses to die! I'm often asked, “To what do you attribute the show’s staying power?” Recently I turned to Kathryn at a public appearance and said, “You know Dark Shadows gets better every year, how can this be?” And, she replied, “Because there’s never been anything like it!” It’s very exciting to powerless-feeling adolescents to imagine themselves being able to cast spells or bite people, and, for adolescents discovering their sexuality, there’s that sexual element to the vampire. I attribute the success of Burton's version to his understanding that the show was gleaned from all of the great Gothic romance classics. We respond to these myth-imbued tales with our hearts and feel a connection with all humanity, and we’re enriched by it.

David M. Story is a communication studies instructor, an aficionado of pop culture, and author of America on the Rerun: TV Shows that Never Die, which contains a chapter on Dark Shadows.