Will Call: Tips & Tidbits for the Theatrically Inclined 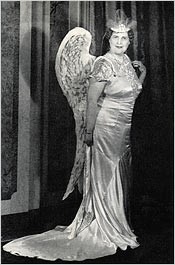 I'll keep this week's recommendations brief. Circuit Playhouse's production of The Seafarer boasts a strong cast and a fantastic script. With a storyline that might have been plucked from a lost episode of The Twilight Zone it's a funny infernal antidote to traditional holiday programming.

Fortunately for theatergoers The Seafarer isn't the only non-traditional holiday offering this season. David Sedaris's Santaland Diaries is back, this time in a cabaret setting with the always excellent David Foster taking on the role of Crumpet the grumpy elf. This week, however, I'm most excited about the regional debut of Souvenir, a play about the notoriously horrible singer Florence Foster Jenkins and her piano player Cosme McMoon.

Florence Foster Jenkins was a human joke whose outrageous costumes and impossibly bad singing voice sold out concert halls everywhere she went throughout the first half of the 20th-Century. Like Mrs. Miller, an equally terrible vocalist who became famous in the 1960's, the appeal came from the fact that both singers were matronly figures who approached their material with the utmost sincerity.

Souvenir is best when it walks a fine line between tender comedy and shameless freak show, and threatens to fall apart when it tips too far in one direction or the other. Jenkins ridiculous singing is only one joke, after all, and although it's a good one it's one that can wear thin with too much repetition.

UPDATE: Oops. I just discovered that Jenkins did not perform as widely as I thought. In fact she only played a few select venues until, at age 78, she caved to public demand and performed at Carnegie Hall. I initially believed that Jenkins toured but that's incorrect.