Sit By Me: My reviewing schedule for the weekend 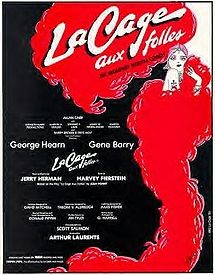 This is shaping up to be a busy weekend. This afternoon I have every intention of catching at least part of the Green Shakespeare Symposium at Rhodes College, then it's off to see pick the twins up from school. Against my best judgment and general policy we will dine in the car on something purchased from a drive-through-window as I drive them out to hang with their mom, the technical director for Hutchison's Weiner Theatre, which is opening a musical revue featuring a mix of contemporary Broadway show tunes alongside pieces by Memphis acts like Lord T & Eloise and Muck Sticky. Yes, we're a very theatrical family. But I won't be sticking around for that one though because I've got a hot ticket for the opening night of La Cage aux Folles.

I'll never forget the first time I saw Harvey Fierstein's musical adaptation of La Cage. Well, actually I have forgotten it. Or much of it. Or rather, it all seems like a phantasmagoric blur of song and sequins. It was the 1987 Broadway tour and I had a fever of 103. Threw up on my date right after curtain call. True story. And I have to confess that the experience created a kind of Freudian aversion to the material, which can be completely delightful. Today I'm feeling fit as a fiddle and hoping that tonight's performance—directed by Mitzi Hamilton— will undo what was done all those years ago.

La Cage functions as a frothy farce, a tender love story, and a political statement all rolled into one. It tells the story od Georges, the manager and emcee of a nightclub featuring extravagant drag shows and partner Albin, a popular entertainer who performs as the great Zaza. The serious silliness gets underway when Jean-Michel, Georges' son from a brief, ill-advised fling, plans a party to introduce his father and mother-figure to his fiancée's conservative parents.

On Saturday, after taking in some afternoon events connected to the Sivads of March festival I'm off to Germantown City Hall for the Tennessee Shakespeare Company's 8-woman production of Shakespeare's Julius Caesar. That's all I'm going to say about that for the moment.

On Sunday afternoon I'll be taking in Frost/Nixon which I was unable to see when it opened at Playhouse on the Square last week, but which I previewed here. The show has great buzz and as a political junkie who once bid way too much on a black velvet painting of Nixon on ebay (which I didn't win, damnit) I'm genuinely excited.

Hope to see you in the theater.