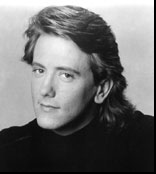 John Dye believed in angels. I don't know why I felt the need to share that other than it's the kind of thing you're expected to say when somebody dies. Especially when the someone in question is young and talented with so many things left to do in life. And Dye, the handsome 47-year-old stage, film, and TV actor who was found dead in his San Francisco apartment this week certainly fits that description.

I know that Dye, a U of M alum, believed in angels because he told me once while attempting to describe his unusual position as a celebrity. At a time in life when most actors are being asked about boyfriends and girlfriends and what it's like to be young and famous Dye was constantly being asked to describe his faith. It was a strange thing, he said, to always be talking about something so personal and complicated. It was to be expected though, he said, when you play the smiting angel on a high profile TV show, and he never minded sharing his beliefs, modest as they were, with interviewers and fans. When asked if he might actually be an angel the actor would often quote his father who advised, "You'll never be a car no matter how often you sleep in the garage."

Dye, of course, played Andrew, the helpful white-suited Angel of Death on the long running family drama Touched by an Angel. He was so closely-identified with the role that his presence on an airplane could send passengers into fits of anxiety. His fans were loving and legion.

Dye, an inspiration to his younger brother, Voices of the South director Jerre Dye, was leaving Memphis in a blaze of glory just as I was arriving in town so I never had the chance to get to know him very well although we've had several conversations over the years. His devotion to Memphis, and particularly to the U of M Theatre Department has always impressed, but that's just the tip of things. It was impossible to enter the Memphis theatre world in the mid 1980's and not be bombarded with stories about this Mississippi native who, after a bit of schooling in Memphis, was positioned for Hollywood stardom.

'80's Prepsploitation at it's finest

Making the Grade, a Prepsploitation film starring Judd Nelson, and shot on campus at Rhodes College in 1983 provided Dye with his big break. Shortly thereafter he was off to Hollywood to star in Campus Man. His Touched By an Angel character was intended to appear only semi-regularly but the part was quickly expanded.

I've never put much stock in awards, but in 1989 I received a certificate that meant a lot to me. The mean, nasty, absolutely hilarious judges/hosts of the Losers Awards, a boozy late night roast once held at the P&H Cafe every year immediately following the official Memphis Theatre Awards, presented me with the John "My Daddy Owns Tupelo" Dye award for most promising young actor. It was a rare, sincere moment in a night filled with snark, and I've always treasured it.

In his absence John Dye's reputation for commitment, energy, and inventiveness challenged many Memphis performers, especially men of a certain age, to get on stage and give it everything they had. So, even if I don't believe in angels, as he did, I do think I have some sense of what it's like to be touched by one.

Thanks John, you have been and will be missed.