Will Call: Tips and tidbits for the theatrically inclined 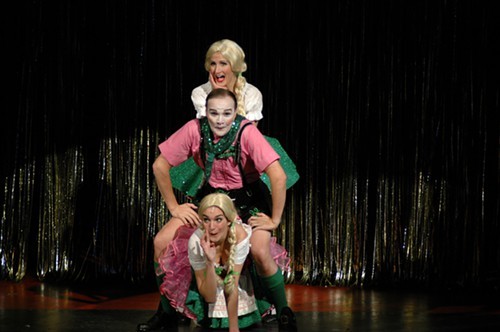 Holy moly what a week. August: Osage County opens tonight at Playhouse on the Square with a cast of local all-stars, Cabaret opens at Theatre Memphis under the direction of Mitzi Hamilton, with Jonathan Christian at the Emcee. Last night (Thursday) Voices of the South opened Jerre Dye's award winning play Cicada at TheatreWorks where it played to packed houses in 2009. Blithe Spirit opens at Playhouse 51 in Millington— a theater I don't write nearly enough about. Also Young Frankenstein—not nearly as bad as the New York reviews might lead you to believe— finishes its run at the Orpheum, and the Dixie Swim Club—a script I actively detest but which audiences seem to love— ends it's run at Germantown Community Theatre. Whew.

Quick impressions:
I haven't read the last third of August: Osage County. I don't want to. I want to see it happen in front of me and I expect to be surprised even though I mostly know what happens. This dysfunctional family drama in the spirit of Sam Shepard, Arthur Miller, and Edward Albee has been universally acclaimed. The black comedy about Oklahoma's Weston family coping with the death of its patriarch touches on everything from infidelity to incest. It's also hilarious and, for what its worth, the most critically acclaimed drama of the past couple of decades. That's right, decades. I honestly can't remember this kind of excitement surrounding the local premiere of a non-musical and playhouse has assembled a powerhouse cast: Irene Crist, Ann Marie Hall, Kim Justis EIkner, Dave Landis, Michael Detroit, Jim Palmer, Ed Porter... etc. In the director's chair: Rob Saterlee, formerly of Chicago's Steppenwolf, and the man responsible for staging last season's fantastic Frost Nixon.

Cabaret is a well known commodity so it's probably not necessary to revisit the plot or themes of Kander & Ebb's musical adaptation of Christopher Isherwood's Goodbye to Berlin, a snapshot of the decadent Berlin nightlife during the rise of Nazism in Germany. I'll only say that the show reunites a few of the key creative forces that made last season's La Cage aux Folles something extra special.

Voices of the South is blossoming like a magnolia. Here's a video review of the company's earlier production of Cicada. Word on the street is this version's even better this time around.

Young Frankenstein: Give this show a break people! No it's not a great musical although the music is sometimes great. This is Mel Brooks in the raw with all of his love of burlesque and Borscht-Belt corn on display. No longer is Brook's story a parody of Universal horror classics instead it's a vehicle for gags. Unsurprisingly "Putting on the Ritz"— the original film's nod to Vaudeville—is also the musical's strongest number, and it's good enough to overshadow other shortcomings. Also spectacular: Preston Truman Boyd's clowning as the monster. AAAARRRRGH!

I've got to get this out on the front end: I am not the target demo for the Dixie Swim Club. And trust me, this show was written with a target demo in mind. (I'm looking at you Red Hat Society). DSC is a formulaic, overly-sentimental, tear-jerking, feel-good, sisters-doing-it-for-themselves dramedy about five

members of a championship swim team who take a vacation together every year for 50-years. The humor is one-liner based and there are nearly as many old gags here as there are in Young Frankenstein. A sample: I never knew the meaning of happiness until I was married and by then it was too late." On a less snarky note the show is full of nuanced, unforced performances that kept me engaged even when the material made me seasick. The packed house roared with laughter and gave the show a thundering ovation that the actors probably deserved in spite of everything else.

I'm dropping in on Cabaret tonight, August: Osage County Saturday and (if the creeks don't rise) Cicada on Sunday. Maybe I'll see you at Intermission.