Even Steven: A correction and some thoughts about Twelfth Night 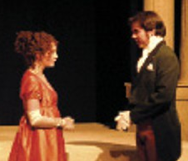 In this week's issue of the Flyer I briefly mention Memphis actor Stephen Garrett's good work in Twelfth Night at Rhodes. I am sorry to report that this was incorrect. Although I've enjoyed Mr. Garrett's work on many occasions, and was quite taken with his turn in the regional premiere of [Title of Show], I didn't enjoy him a bit in Twelfth Night at Rhodes College. He wasn't good at all in the role of Malvolio, a vain and prudish servant to the lady Olivia because he did not play Malvolio, which was, in fact, undertaken by the equally gifted Steven Brown, whose work I have also enjoyed on numerous occasions. I regret the error— some temporary case of homophonic first name confusion— more than most because I wanted to single out Brown's performance as something of a milestone.

Rhodes' McCoy Theatre has brought in some great guest directors to help celebrate its 30th season. Chicago stalwart Scott Ferguson, a frequent visitor to Playhouse on the Square turned The Robber Bridegroom into a living quilt to start the season. Nick Hutchison a veteran of the Royal Shakespeare Company closes the festivities with a lean, straightforward approach to Twelfth Night, paying special attention to consistency of character and Clarity of language. What I've seen of Hutchison's take isn't as funny as it might be. But it's honest, and deceptively satisfying, with especially fine performances by a refined Kilby Hodges, as the Lady Olivia, and a scrappy, trouser-wearing Lee Bryant as Viola. Both are artists to watch. But—no matter what name I call him by— my favorite thing about this production is Steven Brown's Malvolio. Here's why.

My take on Brown's regional career in a nutshell: Tall, handsome, sincere, somewhat stiff actor is repeatedly cast as the tall, handsome, sincere somewhat stiff leading man, with predictable results. That's, of course, a cartoon version of reality, and Brown has always done solid character work. But it's not that far off the mark, either. With Malvolio however, a gifted performer with an affinity for the classics, has found a signature part. Brown's go at Shakespeare's puffed up authoritarian shows just how much he's matured as an actor since he made audiences swoon as Mr. Darcy in Pride & Prejudice in 2008. I want to see him do it again and again. Very fine and very funny.

Twelfth Night skips a weekend—unusual, I know, but that's how the LynxCats roll—but returns April 14-17. I'm heading back for the last Sunday matinee.