"Memphis" is now streaming on Netflix 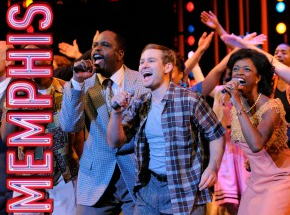 As I type this, The cast of the Tony-award winning musical Memphis is in my house singing "Everybody Wants to be Black on Saturday Night." Thank you Netflix. This sort of thing would have looked awful on my old TV set and it would have sounded worse. But 50-inches of HD with surround sound helps to make it an experience that is, at least, nicer than I might have expected. It's still not comparable to actually seeing the show in person, but I'm not paying to park either.

As readers of this blog probably know the first tour of Memphis launches from The Orpheum in October and advance ticket sales started last week. The theater's staff had mixed emotions about limited screenings of Memphis at Malco's Cinema Paradiso earlier this Spring. Now, three months before opening, the show is available at home on demand to all Netflix customers. To my knowledge, this kind of pre-tour availability is unprecedented.

My general sense is that opening a recently celebrated show in its namesake city is a foolproof undertaking. In a conversation last week Orpheum CEO Pat Halloran agreed, saying he was sure the show would sell out. But I do wonder if, in this shaky economy, the streaming video might not impact the rest of the tour? And if things don't get better, will the practice of streaming Broadway shows eventually cost Memphis, and other magnet cities, some regional tourism?

A friend pointed out that the popular film version of The Sound of Music has done nothing to diminish the live show's popularity. But that was an academy-award winning film made with top-shelf actors three years after the original production closed on Broadway. That was 50-years ago. This could a great advertising opportunity for the tour. But could it also be Memphis's undoing?

I'm wondering what other people think about this. Personally, I'm happy that Broadway productions are being shot for the big screen. But what about this latest development?