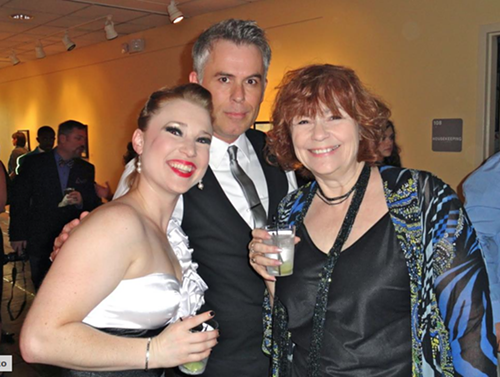 The [title of show] cast—nominated for best musical— starts the evening off with a big bang, delivering this wonderfully charismatic performance in spite of a failing sound system.

You can check out all the rest below the fold...

Still yet even more Janie

Then Mark comes back out and does a little numba

Then a bunch of winners are announced. You can find everything you might want to know about that here.

Between announcements we are treated to performances from the casts of other best musical nominees like...

Playhouse on the Square's Ragtime

In case you missed Michael Gravois' hilarious cameo here it is in slow motion.

And here it is one more time in even S-L-O-W-E-R motion.

That's good stuff. The good-humored Gravois—looking a bit like Michael Douglas in Falling Down in this video— played the lead in Playhouse on the Square's production of the same show. But in spite of very positive notices he was shut out at the Ostranders.

And then along comes Footloose

Then Sister Myotis shows up to roast Janie McCrary.

Actor/Director Sam Weakly then introduces Ron Gephart, the 2011 Eugart Yerian honoree for lifetime achievement in Memphis theater. Here's what Sam has to say...

Good evening ladies and gentlemen—-my name is Sam Weakley. And I have the privilege and the honor of introducing our friend Ron Gephart as the 2011 Eugart Yerian honoree for lifetime distinguished achievement in Memphis Theatre.

Almost 40 years ago and over 600 miles away, Ron Gephart was a young man (pause) working as a roofer in his hometown of Findley, Ohio. Between high school and college, he had found a well-paying, but tremendously arduous, job. As all roofers do, Ron Gephart was listening to public radio as he worked. One day he heard an announcement for auditions for the play, “The Night Thoreau Spent in Jail”. He auditioned, got the lead, and started rehearsals. And on opening night, during the curtain call, the audience gave him a standing ovation. And at that moment, Ron told me, he was hooked for life. That was the moment he stood on a stage and fell in love with theatre. I am sure all of us here can close our eyes and remember a similar, singular moment in each of our lives. And just like us, Ron sensed his life was forever changed.

I thought for a long time…how do I organize a speech about a man whose contributions to Memphis theatre have been so diverse? Well, let me begin with his Memphis acting career. His very first play in Memphis was in the summer of 1980….“Picnic”, in which he got to dance with the movie star Cybil Shepard. (“Insert your own joke here.”) I won’t spend much more time on his acting…I’ll quickly remind you of his Ostranders in “A View from the Bridge”, in “Morning’s at Seven” (both at Theatre Memphis) and in “Third” at Circuit Theatre. And fresh in our minds is his outstanding performance this past spring as Willy Loman in the New Moon’s production of “Death of a Salesman”.

Of the dozens of plays he directed at Shelby State Community College and throughout our community, here is something few people in this room remember of Ron’s directing career: The very first musical to win a Memphis Theatre award for Best Musical, in the summer of 1984, the first year of the awards…was the musical “Handy”…directed by, you guessed it, Ron Gephart.

As an educator, in a career that lasted almost 30 years until he retired this summer, he has influence thousands and thousands of students at Shelby State Community College, now called Southwest Tennessee. Acting classes, Theatre appreciation classes, public speaking classes, during the day….and building sets, hanging lights, finding costumes…doing it all, so many times, late at night alone. I’m sure we can all relate to the latter.

But now, I’m going to tell you about the most daunting endeavor that Ron and his wife Karen set out to do, in the summer of 1988….it was the Beale Street Ensemble Theatre, or as it was to be called, BESET. It was a crazy idea by two crazy kids…Ron and Karen Gephart! They saw a need for summer-stock repertory theatre in Memphis, Tennessee. And together they reached deep into their pockets for the funding and reached deep into their hearts for the resolve, to start a summer- stock theatre in this town. They thought, “If Findley Ohio can do it, why not Memphis Tennessee?!?” And on Thursday night, July 14, 1988, BESET, in cooperation with Shelby State Community College, opened with a production of “Harvey”. Rotating with it that summer was a production of “A Funny Thing Happened on the Way to the Forum” and the children’s play, “Hansel and Gretel”. Here is a program from that opening night over 23 years ago. Helping him that summer, I saw him shake his head many times and wonder if all the headache and heartache was worth it.

Well, like everything in this world, BESET didn’t last forever. For most of us, it seemed to just fade away from the local theatre scene the summer of 1995. I’m sure Ron can tell you many interesting stories of those seven years it was in existence. (He can also tell you how much his new hip hurts, or how much he misses his daughter, who left for college for the first time last week—-but don’t get him started!) But let me unequivocally say, Memphis theatre was and is a better place because of the Beale Street Ensemble Theatre. And through the Beale Street Ensemble Theatre and other venues, Ron Gephart brought the unique music of our city to our stages, probably more than any other person. He has told me privately how proud he is of that legacy—-of bringing the Blues, one of the greatest gifts this city has given to the world, onto the stages in its native city. But still, there is a bigger legacy a good man leaves… one of friendship and love.

I’ve told you of Ron as the actor, as the director, as the educator, and as the producer. Rarely has a Eugart Yerain winner been so diverse. But my last category is that Ron Gephart has been a friend, to us, individually as thespians and collectively as a theatre community. So many independent productions have called upon Ron Gephart, whether it was for a space to perform, or to borrow flats, or just for advice. He loves the small independent productions as much as the big ones, and has supported the independent ones in any way he can, even as an audience member. I will bet you that if you are in an independent production in this town, and there are only a half-dozen people in the audience, Ron Gephart will probably be one of them.

And on the one-on-one level, let me tell you a personal story. Many of you will have similar stories of Ron’s friendship. Here is one of many of mine:
This past January, a dear friend of mine from my college days at the Memphis State Theatre Department suddenly passed away. Many of you here tonight were friends with him too. I posted both on Facebook and the Memphis Theatre Callboard that we, his friends, should get together at our old college drinking hole, Garibaldi’s, and give a toast to him on what would have been his birthday, Jan, 31st, . A lot of our old classmates, from Miami to LA, that night texted me: “Wish I could be there”. A few locals came, but that was early in the evening. I was there until they practically threw me out of Garibaldi’s (THAT felt remotely familiar!). So for the last hour or so, I was there alone, nursing my beer. I walked out of the door, and suddenly a car pulled up… and out jumped Ron Gephart…and I said “Ron, I didn’t know you acted with or even knew John!” And he said “I didn’t—- I just came to support my friends, who lost a friend!”

And so almost 40 years ago and more than 600 miles away, Ron Gephart stood upon a stage and fell in love with theatre. And now it is time for the Memphis Theatre community to stand up, and show our love for Ron Gepart.

The 2011 Ostrander Awards closed with this commentary by Gephart.

And that's it folks, the 2011 Ostrander Awards, just like you were there.