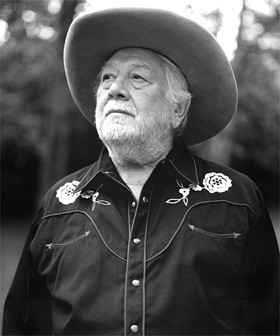 In the Summer of 2010 Cowboy Jack Clement and I talked about "Million Dollar Quartet" the musical. Cowboy Jack— not Sam Phillips— is the guy who actually recorded the famous event. Since the show's currently at The Orpheum I thought it might be fun to reprint a slightly revised version of that interview. And here it is... 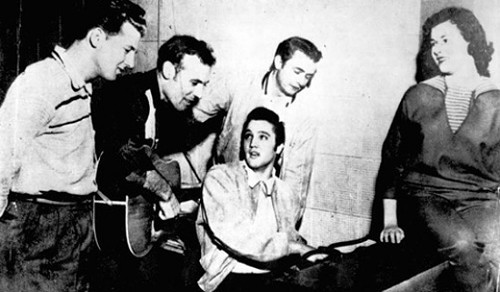 Jack Clement got his first big break in the music business when Sam Phillips hired him to be the sound engineer at Sun Studio. Over the years, he's been a songwriter, producer, recording artist, disc jockey, and Arthur Murray dance instructor.

He presided over Jerry Lee Lewis' first sessions and recorded the "Million Dollar Quartet" at Sun in 1956: Lewis, Johnny Cash, Carl Perkins, and Elvis Presley. Clement wrote "Ballad of a Teenage Queen" for Johnny Cash and "Someone I Used To Know," which became a hit for Dolly Parton and Porter Wagoner. He introduced George Jones to Dickie Lee's "She Thinks I Still Care" and produced sessions for U2's Rattle and Hum.
The guy's been around. And he's got some opinions.

Memphis Flyer: I recently saw Million Dollar Quartet, the Broadway musical. It seems to me that the authors left out at least one very important character.

Jack Clement: Oh really? Who is that?

I'm not in it? Don't they have somebody operating the board?

No, just Sam Phillips doing it all.

Sam went next door to Taylor's restaurant. Carl Perkins was in the studio recording, but everything stopped when Elvis came in. Everybody just started swapping stories and picking out songs. And I remember thinking I would be remiss if I didn't record this. So I moved a few mics around and recorded what happened. Nobody paid any attention to the tapes for years and years. It was a long time before the record came out.

Was Carl Perkins okay with having his recording session interrupted?

Seems like he didn't mind too much. We were pretty much through with him anyway. He recorded "Matchbox" that day. Jerry Lee Lewis was still new in town. We'd invited him over to play with Carl, and I think his piano playing made it.

Maybe you can solve one of the great mysteries of the Million Dollar Quartet. In an autobiography, Johnny Cash swears he was hanging out for a long time and that he sang on the album. But it's impossible to hear his voice on any of the songs. So did he or didn't he sing on the recording?

You know, I really don't remember.

So it's going to have to remain a mystery?

I guess so. If I listened to it, I could probably tell if he was singing on it or not. He might not have been there for very long that day, but I can't really say.

The Broadway musical makes it seem like there was a lot of rivalry between Johnny, Carl, Elvis, and Jerry Lee, but that certainly doesn't come through on the recording.

No, it was all camaraderie. They were having a ball talking, jamming, and throwing songs at each other. They were all very warm toward each other.

What kind of relationship did you have with Elvis?

My main time that I spent with Elvis was when we would play shows together at the Eagle's Nest. [KWAM deejay] Sleepy-Eyed John would introduce us. Ray Price was big back then, so the band I was with was playing that kind of thing. We had three fiddles. And Elvis was the floor show. I can remember when I'd be singing, and I'd see him in the crowd flirting with my fiancée.

You hear so many stories that it gets hard to separate fact from fiction. Was it clear to everybody right away that Elvis was different?

Everybody in town knew he was different. The very first time people heard him on the radio, it was all over.

Sam knew that there was no way he could compete with Nashville. So he'd always say, "Bring me something different." That was right down my alley. And he would let you know if he liked something or not. It was great to have Sam love something you did. He'd play it over and over again and say, "Listen to THAT." If he didn't like something, he'd say, "That don't move me." After I wrote "Ballad of a Teenage Queen," he said, "The more I hear that song, the less I like it." Of course, Johnny [Cash] recorded it, he put it out, and all the girls loved it.

Someone once said that nothing drove you crazier than a parade where everybody was walking in a straight line. You'd have to get out in the middle of it and make all that order a little more chaotic. If you could do one thing to change the way music is made in Nashville these days, what would that be?

I'd tell them to throw all that shit they're making right now away and to start all over again.