My Kind of Town: "Chicago" is in good (jazz) hands at Theatre Memphis 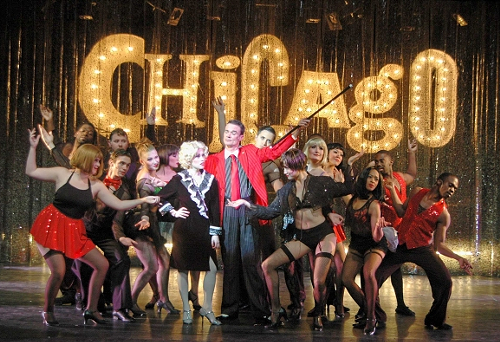 Chicago is Jazz. First there is nothing but an idea. Then there’s a note. Then color, motion, and narrative. Kander & Ebb’s prohibition-era musical, inspired and originally staged by Bob Fosse is a powerful example of how little you need in the way of spectacle when you’ve got a great story, fantastic songs, and outstanding performers. Hell, you don’t even need that great a story.

Chicago trades in crime and corruption using vaudeville as a metaphor and classic comedy/song and dance routines as a storytelling template. The show’s architecture is playfully dark. Its ripped-from-the-headlines story is barely but beautifully told: Two ginned up jazz babies with stardust in their eyes have killed their lovers and it’s gonna take one helluva lawyer to get them back in the spotlight.

I hold two very distinct sets of feelings about Theatre Memphis’s production Chicago, a razzling, dazzling good-time show that I suspect most audiences will enjoy quite a bit. But when I consider this creative team— a strong one— I can’t help but think that the show might have been more complete and more interesting.

Regional heavy hitters like Cecelia WIngate and Randall Hartzog are perfectly cast as Mama, a women’s prison marm on the take, and Amos the cuckolded baggy pants clown who can’t catch a break. It’s great to see an underutilized talent like Lindsey Roberts chewing up a juicy part like the hard as nails Velma Kelly. And while I can tick off a long list of locals who might make a better Roxie Hart than former Idol contestant Alexis Grace, nobody can accuse Theatre Memphis of stunt casting. Grace has two things you can’t teach: Presence and sass. Her acting chops could be more fully developed but she’s got pipes, knows how to sell a song, and is a fresh, welcome face on the local theater scene. Hopefully she'll stick around.

Roberts, who (unfortunately in my opinion) is best known to Memphis theater audiences for her high-flying performances as Peter Pan, is especially fine. This performance is more in keeping with her celluloid star turn as Harper, the waifish petty thief in Craig Brewer’s The Poor & Hungry. Only now she gets to be a full grown woman, and to play a little over the hill. Roberts’s physical revulsion to Roxie’s rise projects a thick cloud of envy and danger giving the show almost all of its emotional heft.

Rob Hanford does solid work as Chicago’s super-lawyer Billy Flynn. Hanford’s one of Memphis’s most gifted musical theatre performers but the rubber-faced actor can be a little busy and over-the-top for my taste. This may be his most restrained and disciplined performance. It’s a good thing.

TM’s Chicago is derivative. There's just no getting around that. If you’ve seen the film the choreography will be vaguely familiar. Fosse is ever-present and in large quotation marks.

Director Amy Hanford knows how to put on a show and she’s taken Chicago’s thesis— Razzle dazzle the crowd and you can get away with murder— to heart. Audiences looking for a bawdy good time will probably be more impressed than the critic. But skin doesn’t equal sex, and a hodgepodge of design elements never quite coalesce to express a unified style of their own.

If it sounds like I’m complaining because a good thing wasn’t much better, I am. Chicago’s a show that gives artists a lot of room to play and I’d hoped for something more playful. That doesn’t mean I wasn’t thoroughly satisfied three songs in by Wingate’s powerhouse run through “When You’re Good to Mama.” That doesn't mean Hartzog didn't break my heart when he called for his exit music and was greeted by nothing but sad clown silence. And, in spite of an excessive, nearly kitschy use of stage smoke and enough flashing lights to send an elephant into epileptic seizures, that doesn't mean there weren't moments when I was completely swept up in the high-life, the low-life, and all that jazz.

Need ticket information? Here's the link you're looking for.