A Bottomless Well: Talking to Douglas Sills, Gomez in THE ADDAMS FAMILY 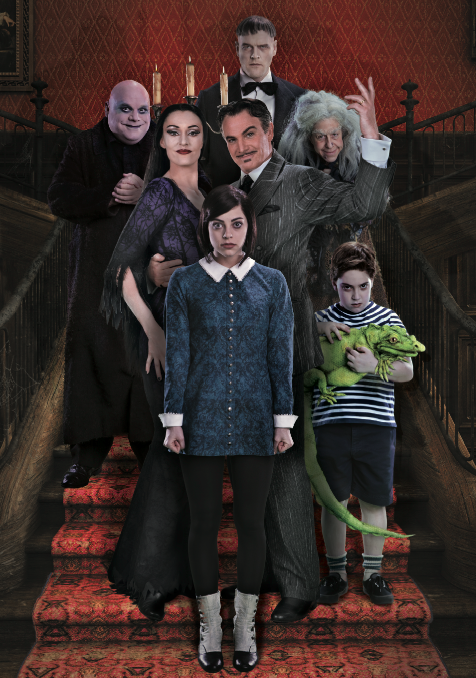 What’s creepy, kooky, mysterious, spooky, and visiting the Orpheum this week? If you guessed the Addams Family (and, of course you did) you’re altogether ookie, and entirely correct. Charles Addams’s morbid cartoons, a twisted reflection of the typical American family, have been frequently adapted to both the big and small screens. In 2010 The Addams Family musical opened on Broadway. And now there's a national tour which retains much of the original Broadway plot but is also completely different with new scenes and songs. Here’s what Tony nominee Douglas Sills (Gomez) had to say about his involvement in show's evolution.

Chris Davis: I understand there have been significant changes in the script. New songs, new scenes, the works. Instead of me poking around in the dark, since you’ve been so close to this process, can you just walk me through how the changes happened, and give me some idea of what to look for?

Douglas SIlls: Sure. The changes were intended primarily to refocus the center of the play around Gomez and Morticia. The creators felt it was important to augment their storyline and so a new significant plot point has been woven into the story. There are no secrets between Morticia and Gomez. Then Wedneday, their daughter, asks Gomez not to reveal to Morticia that she’s seriously contemplating marrying this young man. A young man whose parents are set to come to dinner at the Addams’s that night For over 20 years there have been no secrets in this marriage and at first Gomez resists. But his daughter’s tearful requests get better of him and he decides ultimately that it’s harmless. But the secret snowballs and it really tests the marriage.

Because of this there are significant scene deletions, and song deletions and new songs have been written. When someone asks me to quantify I’d say my show is probably 60-75% different but play’s probably only 40% different in actual words and music.

And the tone has changed too, right?

There’s more of a story in which an actor can remain in character without commenting on the character or the situation. It’s very de riguer on Broadway now to pierce the 4th wall and comment to the audience. It can be a lot of fun and almost always gets a strong response. But it can also compromise an audience’s belief in the scenes being depicted and their investment in the show.

When the storyline isn’t strong the show’s not as potent. For example SPAMALOT is an interesting example of sketch comedy stretched out over 2-hours. You don’t really get involved with the knights and their quest for the Holy Grail. They’re all being silly and commenting on what they’re doing all the time. And it’s all really very funny. But when you watch, say True West , the characters stay within the boundaries of the story. It may not be as humorous but there may be a bigger payoff at the end.

I’ve made it a point to invest very strongly in the storyline, and in the stakes. Whether it’s losing my daughter or losing my wife or whatever.

What you’ve said about the secret reinforces what I already thought about the show. It’s especially interesting, I think, that this is playing The Orpheum on the heels of La Cage aux Folles. Because they’re both about a children in love who aren’t sure what to do about parents are different.

Right absolutely. Yes. There are similarities. No question. But there are differences too. In La Cage the parents know they are different than the surrounding community. Their lives have been constructed to live in a society where they are seen as being “other.” The Addams don’t have an awareness that they are that different. They’re normal. Or, if anything, they’re superior with more refined tastes. That’s one of the big things about this show: What’s normal and who decides.

At one point Wednesday asks, “Can’t you just relax and be normal?” And Grandma says, “Define normal.”

Also, when La Cage was written they couldn’t really portray the heat between Georges and Zaza. And for Gomez and Morticia that heat has to radiate white hot. I thought early on that this would be a great important development. If I was going to take a crack at this show after some really great actors like Nathan [Lane] and Bebe [Neuwirth] I had to figure out the reason, my reason for doing it. For me it was to demonstrate a love affair up there with Scarlett and Rhett or Cary Grant and Deborah Kerr in An Affair to Remember. It had to be hot. White hot. Gomez thinks he’s the luckiest guy in the world. That’s the crux of the difference between our show and the original.

And another thing about La Cage is that it’s almost a period piece now.

It really did go from being kind of edgy to being very mainstream, didn’t it?

It can seem a little dated. What you’ll find, our writers wrote this story recently and rewrote it very recently. One of them [Rick Elice] just got a rave review in the New York Times for Peter and the Starcatchers. The other, Marshall Brickman, is a writing partner with Woody Allen. Rick and Marshall also wrote Jersey Boys, so these guys are really at the top of their game right now.

This show seems to be living its life backwards. Aren’t all the tweaks and changes supposed to happen out of town BEFORE a show opens on Broadway? Did the opportunity to reinvent the show make things more exciting or does that just mean more work?

Definitely more exciting. Absolutely. At this point in my career touring isn’t high on my list. But the opportunity given to me by the creators... That’s interesting to me.

There’s a new production that has opened in Brazil and it’s being well received. It’s our version of the script. There’s about to be an Austrailian production, and that’s our script too. I think they [producers] are seeing how much they can make in global revenues.

When it came time to look at an Addams Family tour the creators wanted an opportunity to improve the show before it was published. Publishing is where the revenue streams come from. It will eventually be released for subsidiary rights for community theaters. There will be a West End production, I’m sure. And I’m sure there will be many others. Because it’s easy to love these characters.

Can’t seem to get enough.

People have an incredible memory for it and a soft spot. The first thing they hear is Da-da-da-dump and something cracks open— even if they’ve had a hard day at work something cracks and they snap their fingers. Suddenly I’m not walking into a cold room. Just those few measures of music have warmed the audience to me before I ever speak.

I have 9-year-old twin girls who are musical. One, the very first time she really sat down at a keyboard and said “I’m going to figure this out,” started pecking out the Addam’s Family theme. Unprompted. It was the first thing she thought to play.

I guess that’s what they call a hook. It’s like a fragrance that brings back all these emotions and memories. One of the things Andrew [Lippa] our composer did so well is how he took that familiar strain and made it into something else. Obviously we can’t use that song in our show for copyright reasons. But you can announce that strain and then ease the audience into something different. He makes his own song that launches from that original in a very seamless way.

Were you humming it as a kid?

Well, The New Yorker was hanging out in our house like in most suburban Jewish households. And I certainly did come home from school and plop down in front of the television with a casserole dish of Coco Crispies and watch Little Rascals, Three Stooges, Addams Family, Munsters, Dark Shadows. What else? These are some of the earliest cells that formed in my brain.

There have been so many incarnations. The New Yorker, a Saturday morning cartoon show, two live action TV shows that I know of. Film...

It was a condition of the Charles Addams estate that the creators go back to the original cartoon and not base anything on the television shows or the movies.

What is it do you think that keeps drawing us back to the crossroads of humor and morbidity?

That’s an astute question, and one that I’ve thought a lot about. It goes back as old as civilization, I think. It goes back to the first time somebody stood up in front of a campfire, created a scary mask and did a skit. We’ve always had holidays like Halloween where there’s a moral reversal for a day. Vice becomes okay. Dark things become good things. Somehow it releases the fear and anxiety that evil dark inversions have for us and we can have less fear.

The scary stuff seems especially popular now. Very mainstream from Harry Potter to Twilight. My twins don’t play with Barbies they play with Monster High dolls, which are like Franken-Bratz. Does that translate into ticket sales for you guys?

I don’t know that I had a realization of the current revival. For me it’s always been a cyclical thing. It sort of never goes away. You can go through popular culture and always find that novel, TV show or movie every couple of years. And every TV producer knows. it. Every good TV producer.

Look at how many times we’ve made and remade Dracula and Frankenstein...This moral reversal, if it’s done right, you can’t sell it enough. There are serious versions like War of the Worlds and comedic versions like the Munsters and the Addams Family. There's no bottom to the well.