Surviving a Mass Shooting: Mary Hollis Inboden talks about THE WARRIORS FOR NEWTON 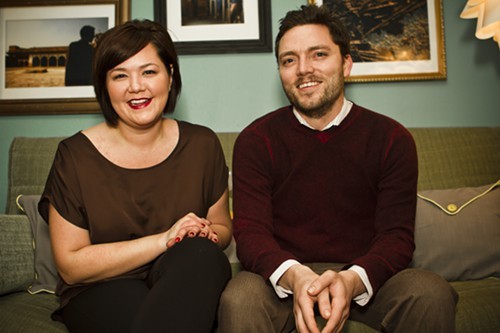 I'm so happy to have watched Mary Hollis Inboden grow up on stage. I say "grow up" although, even as a teenager she was convincing in mature roles, and more than occasionally she was the shiniest star in a roomful of shiny stars. But a show she's bringing back to Memphis with fellow Playhouse on the Square alum Evan Linder, has made me try to imagine having not experienced her as the angry cowgirl in Talking With, or Chesty Prospects in Saucy Jack and the Space Vixens. And it's not easy. Mary Hollis Inboden is a survivor of the 1998 Westside Middle School shooting in Jonesboro, an unimaginable tragedy nearly eclipsed by recent, even more unimaginable tragedies .

Monday, February 4, Mary Hollis is coming home to Circuit Playhouse to take part in The Warriors for Newton, a staged reading of the original work she and her fellow players in the New Colony Theatre created in response to the Westside shooting.

Mary Hollis moved to Chicago in the summer of 2006. Almost immediately she landed two recurring TV roles on The Chicago Code, a short-lived series, and the more critically-acclaimed Boss with Kelsey Grammer. Two years later, Evan Linder, a fellow Playhouse alum, started bending her ear about The New Colony, a collaborative theatre company he was developing with a group of friends. She signed on.

New Colony has since made a name for itself with pieces like Calls to Blood and 5 Lesbians Eating a Quiche.

Here's what Mary Hollis had to say about creating The Warriors:

"The Warriors came about in our third season. Evan and I as founding members were thinking up potential show ideas to pitch to the company. We came uncomfortably close to pitching an idea about silent Hollywood and the Fatty Arbuckle/Virgina Rappe scandal, and then I blurted out "I think I might want to do something about Westside." Evan being a close friend knew what I was referring to. He was a junior high school-er just across the river in the Memphis suburbs when the shooting on my middle school playground occured.

You can read about March 24, 1998 and the shooting on the Internet but only with some effort. The story of Jonesboro is buried now beneath so many other horrific stories of youth violence or school massacres.

At 26, I was ready to talk about the shooting at Westside Middle School and I knew I couldn't do it by myself - I needed the talent family of The New Colony and the blessing from my childhood friends from the playground that day. I began reaching out. It was terrifying. I gathered email addresses from approximately 35 survivors and was shocked when about 24 of them responded with not only their approval, but details from their daily lives now as adults most of them raising families. I hadn't given the people I will always think of as 12 enough credit. Through correspondence with my old friends and with the help of The New Colony ensemble we started writing The Warriors.

Evan and I had two rules we followed diligently: The Warriors would not sensationalize the shooting on my playground and it would not be a story of the actual shooting. In following these rules we created a gentle story of survival, what it means to experience childhood trauma and move forward." 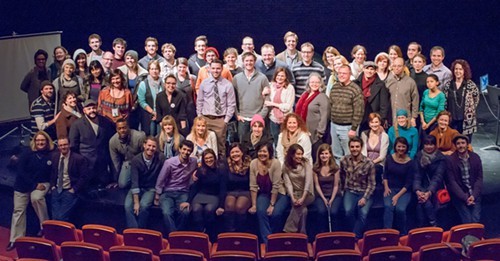 THE WARRIORS FOR NEWTOWN: MEMPHIS BENEFIT
a special reading of The Warriors by Evan Linder, followed by a community conversation
February 4th, 2013 at 7PM, The Circuit Playhouse

ALL PROCEEDS WILL BE DIVIDED EQUALLY FOR THE SANDY HOOK ELEMENTARY SCHOOL VICTIMS RELIEF FUND AND THE MEMPHIS GUN-DOWN PLAN. http://memphisgundown.org/