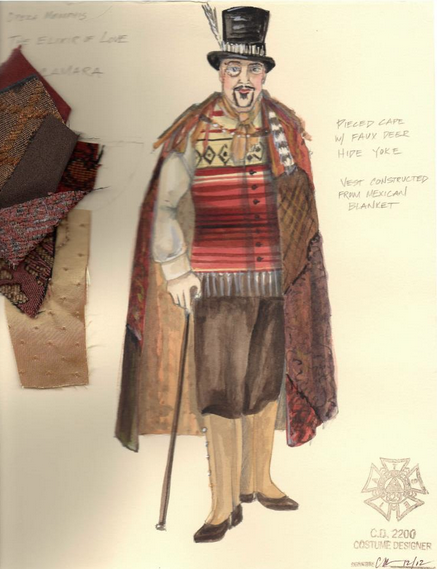 Yes, of course the little girl that's been inserted into the story is both cute and cutely used. The two-dimensional backlot-western set is cute, in a Chuck Jones draws Hollywood sort of way. The plots, subplots, and meta-plots that play out there are also cute.

Moving this disarmingly nuanced story of a boy in love with a girl who gets mixed up with a soldier, and the snake oil salesman who complicates everything with his "love potion," from an 18th-Century Basque village to the old west is, perhaps, the cutest thing of all. And even that's made cuter still, if possible, with supertitles that make fair use of the cowpoke idiom.

I've got to hand it to Opera Memphis' General Director Ned Canty. He knows how to action pack an opera, and his sense for screwball comedy is keen. But in this case I'm left to wonder if, while pursuing the adorable, something more fundamentally human wasn't lost along the way.

Elixir's not exactly a political screed, but there are genuine class insecurities at work in keeping the fated couple apart. It goes slightly deeper than "the farmer and the cowhand should be friends." It's what puts flesh on the bones of a beloved comedy that, if effervescent, isn't a laugh riot top to bottom.

What's most interesting about this Elixir is its ensemble feel. Sarah Shafer's nimble, fluid soprano voice (Adina) is a fine compliment for Brendan Tuohy's "aw shucks" tenor (Nemorino). Both Jordan Shanahan and Ricardo Lugo' do detailed character work as the swaggering soldier Belcore, and Dr. Dulcamara, the medicine show barker with a knack for getting the hell out of Dodge. But , in spite of some fine vocal pyrotechnics all around, everyone is best when they are working together. Opera Memphis' chorus has seldom sounded better and a playful relationship between the singers and musicians boosts everything over the top.

An ad hoc jug band featuring actors on spoons and washboard joins the orchestra at the top of the second act. As set pieces go, it is also adorable, though not as much as it might have been with an organic origin, and more thorough integration into the score.

If it sounds like I'm grumbling, maybe I am. But in his still relatively short time in Memphis Canty has set a high bar. While he continues to innovate, even here, Elixir is, perhaps, two steps forward, one step back. Still, a net positive.

Tonight (Tuesday) is the last chance to catch this Elixir. For more information here's the click.