I See a Little Rigoletto of a Man: Opera Memphis celebrates Verdi’s 200th birthday with a disarmingly straightforward take on his classic tragedy. 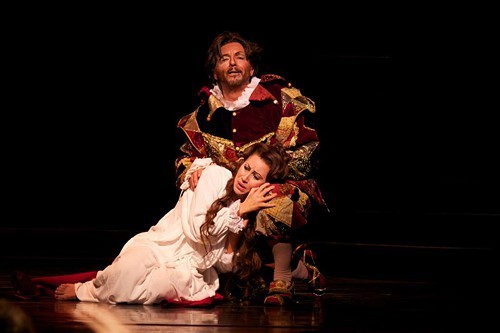 I can’t really review Rigoletto. I didn’t see the show on opening night, but rather during a final dress. I suppose it was a critic's preview, but I’m funny about that. Things can change before opening night, and usually do. I can share impressions though. Most all of them positive. I was knocked out by scenic design that perfectly captured the color palette of renaissance portraiture, and lighting that would have suited Caravaggio. Rich, vibrant reds and golds explode among all the black and shades of gray on stage. And, although I thought a lot of character development wasn’t quite there just yet, I was equally impressed by an ensemble performance hellbent on undermining all the old cliches about tenors, sopranos, and the amorous lure of the spotlight.

But enough about the show, let’s talk about me.

During the first intermission I relocated from my excellent seat (balcony, front and center) to the social media section far stage right, where audience members gathered for Wednesday night’s Rigoletto preview could tweet and text and post comments about the show to Facebook. Or, being located where the dimmed lights of our devices wouldn’t distract, we could even play a round or two of Temple Run during the slow parts.

For the record, it never got slow enough for Temple Run. In fact, for being a dress rehearsal, and still a little hinky here and there, things moved right along. I also have to admit, as someone who believes that all devices go off when the lights go down, there was something really nice about taking in a masterpiece in such a casual environment. I wasn’t alone in a crowded room anymore and could silently share with friends and followers— as if by telepathy— every thought that welled up, and every emotion that swept over me. To my surprise, people were paying attention.

I say surprise only because, if writing about music is like dancing about architecture, what the hell is tweeting about opera? But there were people on the other end. People who love music. People who love opera. And also people who are curious but don’t know much about either one.

“Hope you have tissue ready,” one friend warned after I noted that lightning had begun flashing all around the stage. The tragedy, she cautioned, would be devastating.

To be honest, none of my tweets were especially insightful. And the more I narrated the more obvious it became how much I sounded like some bumbling Fred Willard character spinning “informed comment” into accidental heavy metal lyrics: “Bombast from the pit. Now the Jester dreams of revenge!” In fact, I only bring it up because it was fun. And it was fun in a way that, as ordinary as social connection has become, still made the whole experience seem new.

But maybe it’s time for a little more about the opera.

Rigoletto is a piece that seems to beg for reinvention. It’s been set in the world of mobsters, and in 1950’s Las Vegas, when Frank Sinatra was Chairman of the board. Although he wasn’t directing, Opera Memphis’ General Director Ned Canty likes to play with the material he produces, and I was almost surprised by a traditional profile and subtle acting that’s about as cinematic as an opera can be without losing its clarity. The story is one of a womanizing duke, his saucy, crippled jester, a hit man, a curse, a mob set on woman-stealing, and a family tragedy too horrible to imagine. The familiar music is atmospheric, and sometimes ironic with flashes of fire and fury.

At preview director Keturah Stickann’s Rigoletto never seemed as dynamic as it might be. But then again, this production always seemed to be more of an exercise in balance than anything else. And from the orchestra in the pit to the voices on stage, balance was achieved. If the storytelling was short on character, it was as clear and engaging as Anya Matanovic’s delightful soprano singing in the role of Gilda, the title character’s ill-fated daughter.