A Review that Goes like This: If you're not sick to death of people who aren't members of Monty Python performing Monty Python routines, "Spamalot" is good fun 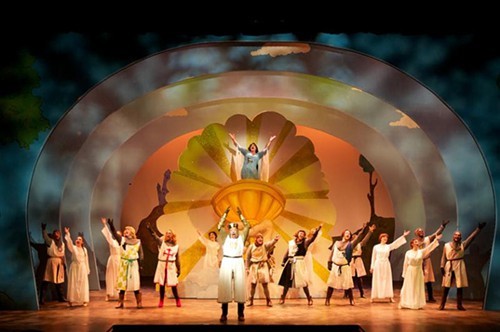 Once in every show
There comes a song like this
It starts off soft and low
And ends up with a kiss
Oh where is the song
That goes like this?

The best thing about the musical Spamalot is that it's short. That is, it's not especially long, or lengthy but rather concise and, being the jot of a thing it is, a minimus of sorts, this refreshingly brief musical, which is based on Monty Python's The Holy Grail, a much loved movie (also of a reasonable length) moves along at a pace most audiences should find acceptable, while still delivering near lethal doses of enjoyment. To be absolutely precise Spamalot, the Pythons' widely known, and highly praised live action romp through Arthurian legend and their own back catalog, is the un-stretched antithesis of things both long and overlong.

I'm not goofing. Not much. Musical adaptations of films tend to be bloated affairs like poor Young Frankenstein, which is twice as long as the source material, with only half as many laughs— if you're lucky. Spamalot, on the other hand, starts off at a steady cantor, then gallops for a while, then cantors some more and before you know it people are cheering and applauding and talking in high funny voices, and slapping one another with herring and the like. And I, having endured many musicals that were once shorter, better movies, appreciate that more than I can express with words, or even a reach-around.

There's not much point in a Spamalot synopsis. Everybody grew up knowing somebody who couldn't stop quoting Monty Python. The material is familiar to the point of being overfamiliar and, for all of its good parts, the musical really does seem to thrive less on its ability to summon new laughter—which it does — than its ability to stir memories of the original. Yes, you will see rude Frenchmen, heroes who soil their armor, a kneecap biting black night, coconut horses, and the Knights who say "Ni!" It's a show with everything including deadly bunnies, ladies in lakes, and, "What, the curtains?" And no Holy Grail redux would be complete without a poor old man who's not yet dead.

On the bright side— and what a bright side it is— the creators of Spamalot, including original Python Eric Idle , and composer John Du Prez, with an assist from Neil Innes of the Bonzo Dog Doo-Dah Band, did a tremendous job of taking high points from the film and transforming them into a musical burlesque, which is both in the spirit of the original and something completely different. "Song that Goes like This," the musical theater's answer to Innes & the Bonzos "The Intro and the Outro," is a very meta admission that the creators know they're making formulaic tripe, and loving every second of it.

Director Scott Ferguson is a broad comedy specialist. In addition to staging Pippin, the first show performed in Playhouse on the Square's new facility, Ferguson has mounted memorable productions of The Mystery of Irma Vep, and Richard O'Brian's Rocky Horror Show. With it's floorshows and its funny walks and accents Spamalot, which is on stage at Playhouse through February 16, has a little bit in common with both.

It's difficult to imagine a better cast than the one Ferguson has assembled to sit around the round table. At the top of the bill we have Bill Andrews and Carla McDonald who have some history being over-the-top together having appeared side by side as Max and Norma Desmond in last season's cinematic conversion, Sunset Boulevard. They are much funnier as King Arthur and and some watery tart who threw a sword at him.

This show feels like a sellout to me. If it sounds like something you'd like to see, I wouldn't wait around too long before ordering tickets. And that's all I have to say about that.

Here's your link for details.