A "War Horse" in the Orpheum Lobby 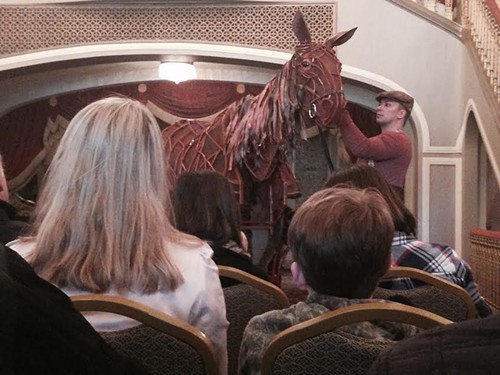 Joey, the 120-pound horse puppet at the heart of the play War Horse, has become a worldwide superstar. The many people who've climbed inside and brought him to life, however, remain largely anonymous.
Matt Acheson, the associate director of puppetry for the show's North American tour, says there's nothing more exciting about his job than introducing a newly hired group of puppeteers to the horse when it's just hanging lifeless in its storage rack. "You see the look on the faces of these people who know a little bit about what's ahead of them, and they are so in awe," he says. Acheson describes the grueling, sometimes exasperating work that follows as a labor of love.
Intermission Impossible: This British import has brought a lot of attention to the art of puppetry. And you grew up in a museum family, and always having access to puppets obviously. But can you maybe tell me a little bit about puppetry traditions in America?

Matt Acheson: It exists in pockets and communities and is made up mostly of people who stick to one style or another. But it’s always quietly there in the background, and every now and then it pops through and is thrown into the spotlight again. I think now is one of those times. It’s definitely being highlighted again. War Horse has a lot to do with that and the beautiful horses that have been created for that show are again raising the bar what puppetry can be, and how it can be used, especially in theater.

Intermission Impossible: Audiences don’t relate to puppets the same way they relate to human actors, do they?

Matt Acheson: For me the most exciting and powerful thing about puppets and witnessing s puppet show as an audience member, is that puppets are such a pure character. They don’t ever leave the theater really. They are always embedded in the show and are always that character you are seeing. It actually engages a different part of the brain when you are watching it than if you were watching a live actor. The first couple of minutes you’re, “yeah, that’s made of wood or foam. It’s not human, it’s not alive. Then you sit with it longer and all of a sudden the puppeteers disappear. It has its own skin. It’s breathing. It has its own thoughts. And that’s the audience member putting all of these ideas and emotions into the puppet. You become so connected to the puppet that you sympathize with it in a different way. Possibly even more deeply than you would for an actual human because you are doing so much work to make that thing come to life. The puppeteer is giving you these points of reference and familiarity that you are connecting with but the audience member is doing all the work. So, when there’s a death scene, as there is in War Horse, it rips you apart. Because you’re seeing something that you’ve created die in front of you. It’s pretty special in that respect I think.

Matt Acheson: Any production that asks the audience to come halfway. We all want to participate in the — I hate to say magic, but...

Intermission Impossible: What does an associate director of puppetry do all day?

Matt Acheson: I’ve been working on War Horse for almost four years now, since it arrived in the states. I audition puppeteers, hire puppeteers, train them, maintain the choreography, and help develop new ideas new choreography, organize the team structure. And then there’s a lot of team building and damage control. And keeping the team healthy and happy.

Because it’s hard to be, day after day, strapped physically to another person, and letting go of what you want a scene to do as a singular person, and trying to come up with a group consensus without talking to each other. It’s physically demanding, clearly. But it’s also emotionally demanding on the puppeteers. And they are a great group on the road. They have been amazingly resilient and strong. 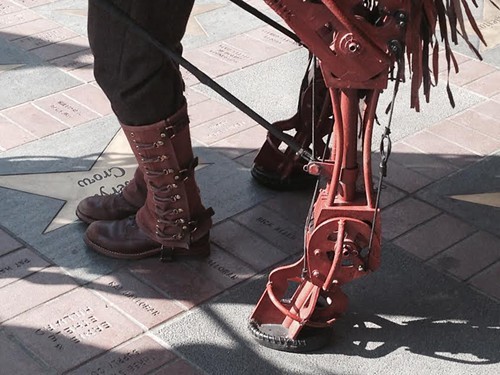 Intermission Impossible: Where do your puppeteers come from?

Matt Acheson: A lot of people come from— I don’t want to say circus world. But we’ve found people working in physical theater like Blue Man Group-type folks. There are a lot of actors and dancers that end up there. But there are specific things we are looking for when we are auditioning. There are three positions in the horse. The positions have different personalities and needs to create the one singular personality of the horse. The person on the outside is usually a little more graceful with their body. They know how to disappear in plain sight. They’re more like a partner dancer, so they work with the object. The person on the inside up front in usually has a fiery personality and is very physical and quick, and has a lot of stamina. The person in the back is usually really grounded to the Earth and counters the personality of the front puppeteer. All of a sudden you have the personality of the horse. And each horse is different, which is fun to watch.

Intermission Impossible: Is the choreography entirely by the numbers or does each puppet’s team develop its own personality?

Matt Acheson: In certain scenes you have to go by the numbers. You have to count so many steps or somebody’s going to get hurt. But many scenes where we talk a lot about horse psychology and being a trained animal and what kind of energy and body language would be appropriate so we can keep the movement pure and authentic to a real horse. 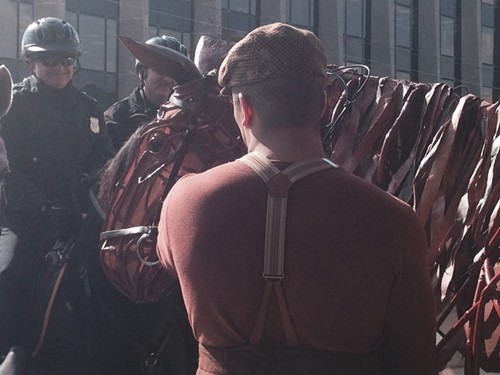