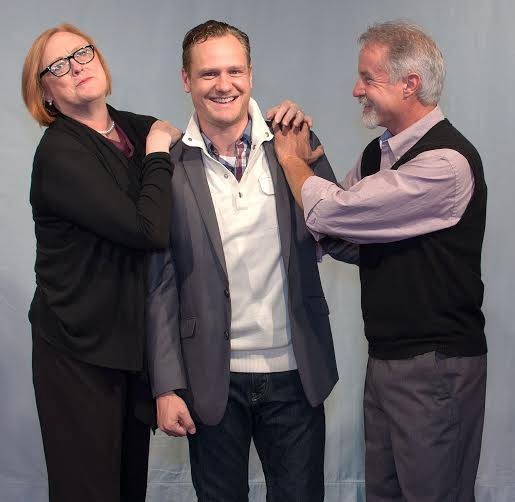 It’s difficult to watch a revival of Company and really understand just how different and risky this Seinfeld-like musical was in its day. It's not about much, really. Not much more than doing things with your friends and the condition of “being alive,” and relatively average. The scaled down show launched into pop consciousness at a time when musicals were still mostly big over-the-top fantasies. For those without a scorecard, Company’s day was 1970, not that anyone could peg its vintage watching Germantown Community Theatre’s uncomfortably modernized production. The costumes, hairstyles, and cityscapes are uniformly of the moment— this moment. But the characters are locked away in another time, and defined by another ethos. They continue to embody retro gender types they once butted up against. When characters talk about a “generation gap” they do it in terms of the 1960’s-era counterculture.

Company even has its very own ditzy stewardess/sex-fantasy stereotype that could have walked right out of last season’s GCT production of the chauvinistic romp, Boeing Boeing (vintage 1960).

Contemporizing modern plays is a hazardous endeavor and almost always ill-advised. When language and character functions aren’t archaic, there’s really no point in deploying concept to meet audiences halfway. Imagine, for example, Arthur Miller’s post WWII drama All My Sons set in 1992 in the wake of Operation Desert Storm. It could work, I suppose, but it would be strained and more than a little ridiculous. And that’s more or less the result with GCT’s Company, where, to borrow from Pat Benatar, bedrooms are the battlefield in question. GCT’s tech-forward update might be a complete disaster if not for heroic efforts by an honest, unassuming and unpretentious cast that almost makes up for conceptual choices that are nothing like any adjectives in the first half of this sentence.

Company boasts many of Stephen Sondheim’s finest songs and a nearly plotless book by George Furth. The show revolves around Robert, a single man who's turning 35, dating three different women, and keeping company with his old married, almost married, and happily divorced (but living together) friends. Everybody wants poor, single Bobby (“baby, boobie” etc.) to be happy. That means being like them, of course. It’s a mess in the best possible way, playing out like a typical (if tuneful) day in the life of the American bourgeoisie.

Lee Gilliland’s Robert is something of a cypher. We never really get to know who he is, but he seems like a nice enough guy and we like him all the same as we watch him flirt harmlessly (mostly) with friends while fumbling other relationships. The supporting cast is fleshed out by a roster of proven character actors like Sally Stover, Stuart Turner, Renee Davis Brame, Brian Everson, Cary Vaughn, and Jaclyn Suffel. Everybody has a moment to shine, though nobody quite as brightly as Brame who takes “Getting Married Today,” a serio-comic bit depicting a bride coming down with a case of cold feet, and turns it into the most memorable number in the show, soaring past certifiable hits like “Marry Me a Little,” “Side By Side,” “The Ladies Who Lunch,” and even the soaring, climactic “Being Alive.”

I once overheard an overly-candid director tell an uptight actor that he needed to spend an afternoon rolling around naked on stage. It was a figurative statement, but one that came to mind watching Brame perform. She remains clothed throughout. But what she does both physically and emotionally looks like the physical embodiment of that long ago advice. Funny to boot. And sometimes a little disturbing.

Although all of the actors do manage to connect emotionally to their characters and to one another, their relationships never grow or deepen as they might. This is exacerbated by a technological gimmick that must have sounded great when it was being pitched, but wrecks things in practice. There are three “windows” on set that double as screens for video projection. Characters that might have appeared live on stage often appear instead as video clips, leaving the actors who don't have business alone on stage to either ignore the video apparitions, or gaze like they were watching TV, or to wait frozen in the moment, till the singing video stops to say the next line. Things stop when videos start. Human connections are lost, and that’s all that really counts in this show. The offstage sound is so poor by comparison, it’s almost as if the actors have been imprisoned between enchanted panes of glass. The ultimate effect is similar to ghostly portraits hanging in the walls of Hogwarts Academy in the Harry Potter movies. A little creepy, and a little silly.

Projection is a useful, and versatile tool. I’ve seen it used well both interactively and scenically. But we simply don't go to the theater to watch YouTube, we go to see actors performing live, in three fleshy, sweaty dimensions, projecting their real (sometimes amplified) voices and spit to the back wall. We call prerecorded music “canned music.” This Company was full of canned people. SOYLENT GREEN IS PEOPLE!

But seriously folks, Soylent Green, it’s made of people. And the video projection in GCT’s Company makes the show a bumpy, tonally inconsistent ride, and not nearly as full-sounding or fun as it might have been with inventive human-centric staging, more thoughtfully-imagined choreography, and consistently excellent musical performances. To give credit where due, the videos do look nice as a moving backdrop for the song, “Another Hundred People,” a love letter to anonymity and the banalities of life among strangers in a city that never sleeps. But they look good in a way that reminded me of what a lousy idea they were in the first place.

People give a lot of lip service to the "magic of theater," but have you ever stopped to ask what that line really means? I usually describe it to people like this. If you promise to show me an elephant and then you show me an elephant that’s impressive as hell. But if you show me an apple and make me believe it’s an elephant, that’s theater. And that’s the “magic” of theater. All of Company’s projected streetscapes filled with real New York people rushing to work, or playing some B-ball on the graffiti-tagged playground are so cool. But I didn’t go to the theatre to see the same old glamor shots or clips of what director Teddy Eck did on his summer vacation. I came to see (the very good) Carly Crawford, and a seasoned company of gifted performers and designers paint a more impressionistic, more magical, and more lingering image of New York in my mind.

Even when they are performed fully live most songs sound like they could have used a more rehearsal. It gives the musical numbers a strangely humanizing quality that is appealing, at least. It may underwhelm Sondheim fans looking for fireworks. Or polish, even.

Director Eck also helmed Grace a true highlight of The Circuit Playhouse’s 2013-14 theater season. It’s fairly obvious that he’s an artist who likes bold choices and isn’t afraid to experiment. That’s a good thing with a real downside. The thing about experimentation: Unfavorable outcomes are a natural part of the process.

GCT's performance space is about to get a facelift. It's exciting news and it will be interesting to see what kind of difference a new, lower stage will make in terms of production quality. The old converted schoolhouse can be a difficult space to design for and direct in. That’s never stopped the theater from producing an ambitious slate of musicals, comedies and dramas though. Historically directors have found inventive theatrical (read: human) solutions to challenges created by a small space with a less than adequate light grid and limited options for entrances and exits. Technological solutions certainly should be explored if they can be deployed in creative ways that don't distract or otherwise detract from the overall quality of a production. Company is a fine example of how not to do that. And it's a shame. There is a thoroughly charming production of this show bottled up like a genie inside the canned performance clips.