Theatre Memphis' "Of Mice and Men" Doesn't Say Much About Either 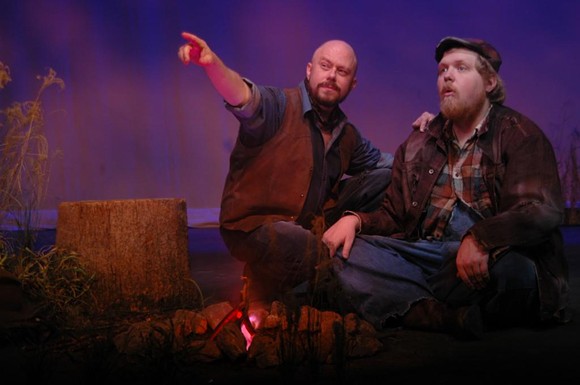 I try not to play favorites, and work hard to consider every show based on its own merits. I want to write about the play I’ve seen rather that the play I wish I’d seen. But some productions stick with you, and letting go of the past is hard. Take, for example, Memphis’ last production of the play inspired by John Steinbeck’s novel Of Mice and Men. It really wasn’t good. No, it was “Holy Crap” extraordinary, top to bottom. The perfectly cast ensemble was tight. And with it’s narrow swath of blue sky, Bruce Bergner's expressionist design dropped audiences into the hope-twisted minds of damaged people, and the austere, off kilter world of the Great Depression. Michael Ingersoll’s bantam rooster edge couldn’t hide that his George needed the giant, developmentally stunted Lennie just as much as Lennie needed him. But it was George Dudley’s rich, humane portrayal of Lennie, an infinitely sweet, extremely dangerous man who literally loves things to death, that really elevated Playhouse on the Square’s take on material that can easily slide into cliche.

When awards season rolled around, it became evident that the Ostrander judges were also mightily impressed.

So, what does any of this have to do with Theatre Memphis’ perfectly competent, epically-imagined revival? Maybe not so much, as far as the average audience member is concerned. For me, however, these two takes on an American classic represent a clear line in the sand dividing things I value from things that make me shake my head. The earlier production was poetic and evocative. The current one, while beautifully executed, is often literal to a fault. After all, it’s the empty spaces— the things things left to an audience’s imagination— that turn our imaginations on, and optimizes a theatrical experience. Show me an elephant and I’ve seen an elephant. Good show! But hold up an apple and make me believe it’s an elephant; that’s magic and the stuff that sticks with you after you’ve seen your share of elephants.

If the wonderful short story writer George Saunders teaches us anything, it’s that nothing highlights artificiality like attempted verisimilitude. And, from a design standpoint, that’s where TM’s Of Mice and Men takes its first wrong turn. When water is splashed in an onstage creek and embers glow in a realistic fire (that looks anything but real) we aren’t drawn into the world of the play, but taken out of it and reminded of something that has nothing to do with the majesty of nature or Depression-era austerity. We’re reminded instead of sumptuousness, excess, and so many things at odds with the tone of the source material. But maybe it’s not about the set at all. A more thoughtful and dynamic lighting design wouldn’t just illuminate all of the beautiful space all the time. It would instead frame the actors and focus the action on a stage big enough for eyes to wander about.

It’s easy to make an audience say, “Awwww.” Walking an adorable, and obviously very loving three-legged dog on stage will do it. Finding the interior life of a play and its characters can be more difficult, however, and this is the kind of play where any “awww”-inducing sweet things really need to have their guts crushed by Lennie in short order. The sympathy we feel for old man Candy’s soon-to-be-executed dog shouldn't stem from adorability, but vulnerability, and the pathetic animal's bond with a failing one-handed laborer, too feeble to keep up.

Todd Nelson delivers a grounded performance as Slim, the sure handed crew boss, and Joshua Hitt effectively conveys douchey entitlement as Curley, the ranch owner’s son, desperately jealous of a wife he treats like property. For the most part, however, the supporting cast seems flat and disconnected. One, functional but frustrating performance is so lacking in depth it might be described as shouting in a peculiar accent.

The casualty in all of this may be Stuart Turner’s simple, emotionally honest performance as George. Turner’s an under-appreciated area performer who raised his profile last year with a funny, physically generous performance in the iffy 60’s-era sex farce Boeing Boeing. Turner’s George is plainspoken, and easily agitated, but a little too decent, exhibiting no trace of the cruelty he eventually confesses. It’s a subtle, against type performance and I wish I could have seen it in a more intimate circumstance, where there was no need to enlarge character traits and project them across so much distance. I’d have also liked to see him play the part opposite a more genuinely threatening Lennie.


On the surface Jeremy Bukauskas would appear to be a great choice to play Steinbeck’s man child, a challenging character that never really grows or changes as the story plays out. He’s sweet faced, and he dwarfs everybody else on stage. But Bukauskas can’t seem to muster more than one note, and at every turn performance choices call to mind a half-century of “pet him and squeeze him” cartoon parodies by Warner Bros. The scene where Lennie’s love of soft things turns deadly needs serious attention. To borrow a line from Dennis Miller (something I almost never advise), I haven’t seen choreography that stiff since Ruby shot Oswald.

Having said all of this, I never regret time spent with Steinbeck and his characters. And for all my complaints, this was no exception. I appreciate the fine craftsmanship on display, and more than anything else, I appreciate that director Tracy Zerwig Ford saw something big and wanted audiences to experience Americana on an operatic scale. I just wish that George, and Crook, and Slim, and even the giant Lennie weren’t somehow rendered smaller than life in the process.

As always, Theatre Memphis delivers a quality production. But I strongly suspect that customer satisfaction will vary.