"Copenhagen" is Up to Snuff 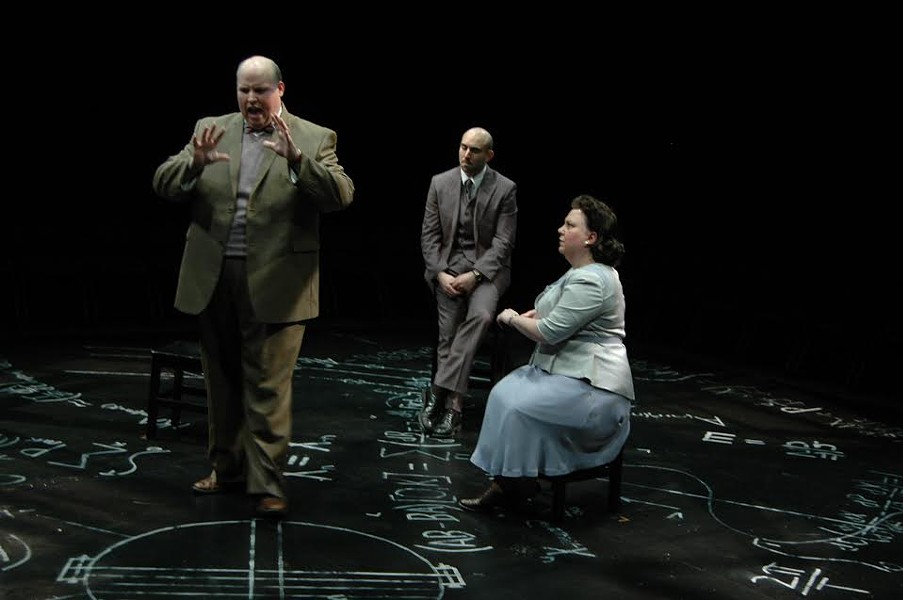 Once upon a time I described Michael Frayn’s Copenhagen as a “bad play.” Having gone back for a second serving, I’m comfortable standing by that initial pronouncement, with one allowance. When you submit to the script’s unreality, and meet Frayn's difficult material on its own terms, this "bad play" can make for a fine night in the theater. Thankfully Theatre Memphis' straightforward take on the atomic ghost story doesn't force ideas as big as all space into a vessel as unworthy as parlor drama.

And maybe it's a "bad play" because it's not really a play at all. At least not in the conventional sense.

Copenhagen is set in no place or time. The characters— physicists Werner Heisenberg and Niels Bohr, and Bohr’s wife Margrethe, are not alive. The author’s aim is to project the image of these three characters across time and catalog possible outcomes of a 1941 meeting at the onset of a global nuclear arms race. It resembles a WWII-era thriller, but Copenhagen is a genuinely experimental, steadfastly inconclusive, and demanding theatrical exercise. It's comprised of exotic sub-dramatic matters, isolated for observation. And changed by it.

Theatre Memphis’ current Next Stage revival — like good scientific process — requires some patience. It rewards that patience with smart, award-worthy performances by Jason Spitzer, Gregory Alexander, and Mary Buchignani. Director Stephen Huff’s clear, unfussy take on complicated material reflects the spirit of Bohr, the pioneering physicist who expressed complex ideas using practical examples and plain language. To that end this Copenhagen is still probably more literal than it might be. The staging never takes full, fantastic advantage of the show’s determined anti-realism. But when the actors cook, it’s the atomic bomb.

Scenic and lighting designer Daniel Kopera has imagined a space that expresses space— and time. Three unremarkable black chairs sit in a pitch black environment. Formulas and wave signs are scribbled in white (painted) chalk on the floor. The next dimension is made apparent when similar formulas are projected across actors inhabiting the void — Actors who live, love, and hate on each other a little, in the imaginary skeleton of a rotting universe. An uncomfortable time was had by all.

That's a good thing, if you ask me.