"Kiss Me Kate" is a Pretty Mess 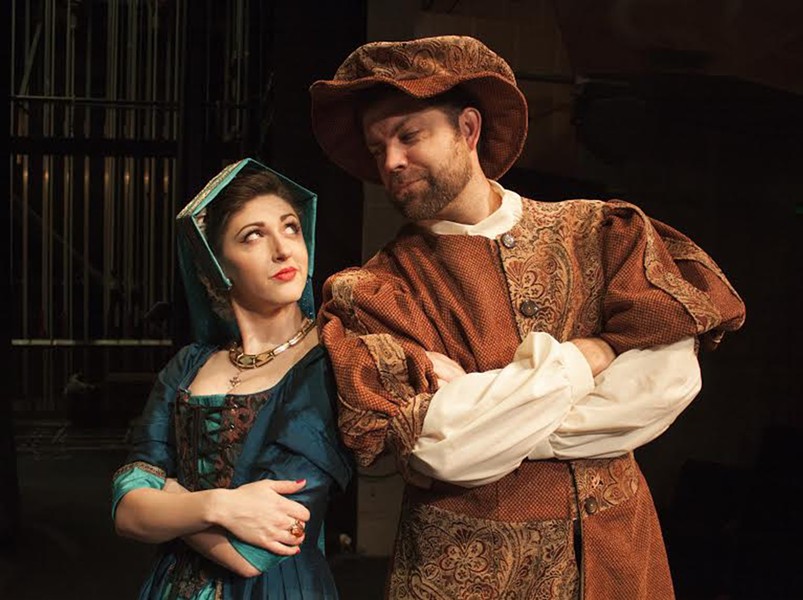 No sparks ever fly in Playhouse on the Square’s fetching revival of Kiss Me Kate. And watching this lovingly staged, but chemistry-free production, I began to wonder whether or not we should put the intermittently delightful show’s misogynistic script to bed for good. It’s practically the poster child for concert-style productions. Cole Porter’s lively and lurid score is a sonic treasure. And, to be fair, with the right casting there’s still some sparkle left in Bella and Samuel Spewack’s book. Alas, running gags about spanking a spirited woman so hard she can’t sit down without the aid of a pillow, have probably received their last comfortable guffaws.

“But wait,” you say. And you’re right to say it. “This is a mid-20th Century artifact, right?” (Yes). “And it’s all based on Shakespeare’s Taming of the Shrew, no?” (Again, yes). “So doesn’t that make all the troubling stuff okay?” Well… maybe it does and maybe it doesn’t. In some ways, Kiss Me Kate’s classical roots almost make it more problematic since musical’s authors sampled only the source material’s most misogynistic passages. And, instead of providing contrast, Kiss Me Kate’s conjoined backstage farce about warring actors who are really in love, rigidly mirrors the selected Shakespeare. The problem isn’t that the script contains objectionable ideas. It’s that comedy invites us to laugh at those ideas. And audiences just aren’t as universally conditioned to laugh at the kind of stock material regarding gender and race, that you tend to find in comedies of a certain vintage.
Having said all that, POTS’s Kiss Me Kate has some real high points. Bryce Cutler’s elegant, wide open set is a skeletal echo of the Elizabethan stage that also calls to mind the best of mid-20th-Century scenic designer Jo Mielziner. Beautifully lit by John Horan, it’s the perfect environment for a seedier-than-it seems story that plays with charmingly disreputable actor stereotypes.

Choreography is applied judiciously, and bent toward maximum fun, punning visually off of Porter’s famous double entendres. And, although his leads are a little on the wooden side, Director/hoofer Jordan Nichols gets winning vocal performances from the whole cast. Considering how great the songs are, that may make up for the fact that there’s not a single credible relationship.

This Kiss Me Kate is a pretty, richly-textured thing with just the right amount of grit. Johns, Maness and Hemphill, do some of the show’s best work as a pair of gangsters tricked into making sure that the play’s leading lady doesn’t abandon the show. Their song, “Brush Up On Your Shakespeare,” is a real crowd pleaser in the hands of a couple of wise guys.

There’s a deliciously amoral edge to Porter’s score. Even the sleazy here/silly there incidental music dazzles. The orchestra, under the direction of Adam Laird, nails it. “Another Opening of Another Show,” perfectly illustrates the endless excitement and existential dilemma that accompanies a life in the theater. Marc Gill burns a hole in the stage with his slinky, rubber-boned run through “Too Darn Hot” while Leah Beth Bolton stops the show cold with “"Always True To You In My Fashion",” a killer-diller song about owning your sexual identity. And, you know, maybe trading some petting privileges for a nice fur coat and stuff. Yeah, it’s a mess. But it’s a swinging mess.

So yeah. No sparks. Plenty of baggage. And plenty of reasons to go anyway.