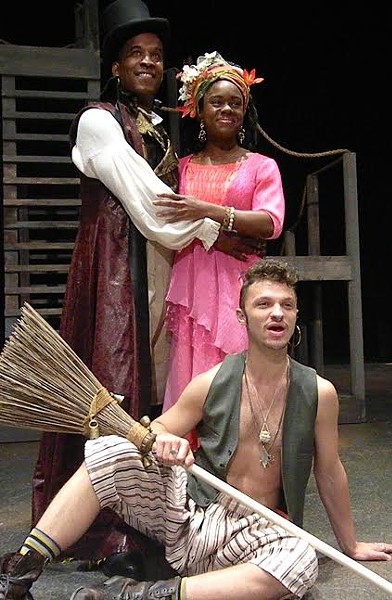 Tennessee Shakespeare Company is reviving one of the bard's best loved comedies, and giving it a distinctly Southern twist. Intermission Impossible asked director Stephanie Shine about the magical elements found in A Midsummer Night's Dream, and how she's used regional music to recontextualize the play's familiar settings and characters.

Intermission Impossible: Tell me a little bit about your perspective on A Midsummer Night’s Dream and how you came to give it a voodoo/bayou twist.

Stephanie Shine: A Midsummer Night’s Dream is play known to many. If it’s not known specifically, it’s known generally. So there’s this sense of familiarity about it. For this production in particular, I wanted to explore the depths of it. Because, I think the general notion, speaking for all of America here, is that it’s a great comedy. And it is. It’s one of the great comedies. But it also has a soul worth mining. And the soul of A Midsummer Night’s Dream is one of transformation. Shakespeare has all the characters go into a forest. And, as with so much literature, where there is a trial by nature — a trial by forest — you come out changed. Everybody gets to change because of the forest. And, with that in mind, I wanted to emphasize the area of change. That’s where the bayou comes into play because in my mind, and in my imagination the bayou is sultry, ever changing, ever mysterious. And you never quite know if you’re on terra firma or not. And you think about the animals that might be existing in there, and the inherent dangers, and the sounds of the bayou. And the fireflies— it just seemed like a really great place to try yourself. To see if you could do a night in the bayou . And what it would be like coming out the other end.

I like the regional specificity— that it’s a distinctly Southern choice.

For us here in the south the Bayou is familiar ground. The play has so many magical elements to it, and I think the bayou grounds us. Because we understand the setting and we can imagine things unimaginable happening in the bayou.

And we’re familiar with the sounds.

Midsummer it is a very musical play it has lots of music in it and I consider there to be four fairly distinct worlds in A Midsummer Night’s Dream, and each of those worlds is represented musically. That's what's fun about having it set in a Southern Louisiana-inspired setting, because the music of that culture so rich. And that's one way to define the worlds— by the sounds that we hear.

How does all of that work?

Part of the comedy is watching how these worlds intersect. There is the world of martial, military law that we have in the court of Duke Theseus, who wooed [the Amazon Queen] Hippolyta with his sword and won her by doing her injuries. Now he’s going to wed her whether she likes it or not. The young lovers experience this martial law when Hermia’s father Egeus comes to Theseus and says, “Well if my daughter won't marry the person I want her to marry, I'm going to call up an old law.” God knows in our country there are so many old laws on the books you don't know exist anymore until someone brings them up. And I kind of think this law is that way as well.

Good point. I think Egeus describes it specifically as the “ancient” law of Athens.

He does. Then we have the young lovers who are looking towards hope, and trying to carve a new existence for themselves. And you've got the immortals— the fairies who exist without having a lot of interaction human beings knowingly. But they certainly wreak havoc on human world. We also have the mechanicals who work with simpleness and duty, trying very hard to produce art that will be pleasing to people. And of course they have a big transformation in the forest as well when Bottom is turned into that donkey.

And each of these groups has its own musical sound.

Our human world setting is the mid-nineteen-forties, which makes sense, coming at the end of a war. So there’s all that wonderful big-band music. And the mechanicals play the music live. All six of them play a variety of musical instruments, and many learned just for this production. The sounds of the mechanical world is early New Orleans Jazz. And then in the forest it's Cajun, Acadian, Creole and all ancient sounds. Who knows how old some of those melodies really are? It’s fun to bring them to life again for the lullaby to Titania and the blessing.

A Midsummer Night’s Dream is so frequently produced. How many times have you done it?

Actually not too many times given the length of my career and how popular the play is. I did it once when I was 20. I played a fairy. I’ve directed it twice. Once with middle school kids and later professionally. But it's been 17 or 18 years since I've had any in depth contact with the play, which is also a blessing. It's humbling to come back to a play you think you know, and you’ve got almost two decades of life under you, and all of a sudden it's speaking a different language to you. That's why we do Shakespeare. That's why you spend a life with Shakespeare. Although there's a limited number of plays, what they have to offer you is infinite.

Wow. That is unusual. I’d have guessed you would have worked on it many times, and I was hoping for some insight as to how one goes about greeting old friends as strangers.

If it’s not something that I’ve personally been involved with it's not quite an issue. If I’ve done a show several times within recent history— like the Romeo and Juliet that I’ve directed every year for four years — that's a challenge. I have to really think about it. Really take time to figure out what the play is saying this time that is different than even eleven months ago. What's important in the world that the play might address? So it's always topical, always fresh.

Transformation is the thing that really stands out in my mind about Tennessee Shakespeare Company’s first production of Midsummer several years ago. Specifically in regard to the character Puck. The text makes it clear that he’s a shapeshifter, but I don’t think I’ve ever seen that fact made so clear as it was in that production, directed by Dan McCleary. You’ve already talked a little bit about transformation, I was hoping you might take a deeper dive on that theme.

The word that Shakespeare uses to describe that is “translated.” At first I thought, “translated?” Are they speaking malaprops? But no. Translation is to change the form. This starts in the forest when Bottom is physically turned into which he behaves. And then he’s changed once again from an actor that was all about, “I” to an actor who is all about, “we.” And as you know, you can’t do theatre if “we” isn’t the active pronoun.

Puck’s feelings about the mortal world are ones of disdain: “Lord what fools these mortals be!” He likes to make your life difficult for humans. But something changes in Puck too. He talks about his transformations and how he'll make himself to look differently and scare people. Then towards the end of the play he's the one who comes out to offer the final blessing and the apology to the audience. So it's within Puck that we see how the fairy world changes its viewpoint about humanity.

When I think about Tennessee Shakespeare, I think about environmental productions. But this time around you’re using the University of Memphis’ theater.

We are not only using the University of Memphis to space but the partnership that came about as a result of collaboration with Holly Lau and the whole theatre department at the University of Memphis, is allowing us to build our set there and out costumes. So we're really in residence right now. It's a beautiful rehearsal situation to have all the elements we need in one space. That’s not always been afforded to this company. It just feels like a dream come true.

Speaking of transformation, I love environmental theater and have done a lot of it. But sometimes it’s a relief not having to expend so much energy trying to make a viable theater experience a place that was never intended to be a theater.

I have watched Dan McCleary spend so much time and effort doing exactly that. We were constantly inventing a space. Often it can give you marvelous artistic explosions and insights. But sometimes it's so nice to be in a theater and let other elements of your artistry have an opportunity to come to the surface. You know there are only so many hours in a day.

A Midsummer Night’s Dream is on the University of Memphis main stage June 4-21, 2015

The production’s title sponsor is FedEx, is sponsoring a "Free Will Kids Night" every Thursday. Up to four children under 17 years will be admitted free when accompanied by a paying, attending guardian. Also, family morning matinees will be made available Wednesday mornings at 10:30 am.

Some images and sounds from TSC's 2011 production of A Midsummer Night's Dream.