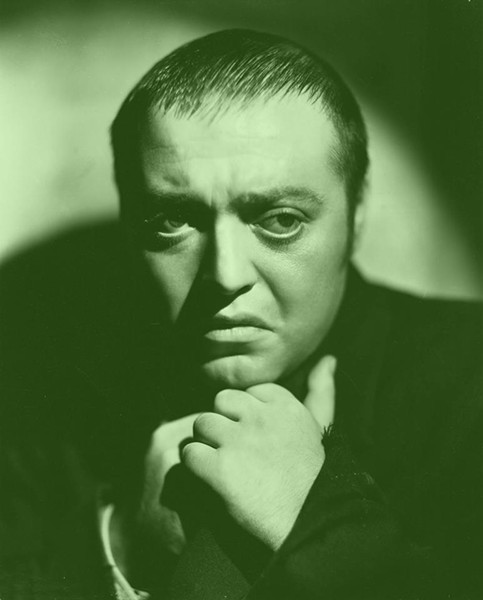 An Actor in Purgatory is an unusual script for Our Own Voice Theatre Company. The subject matter— actor Peter Lorre — only makes it more interesting. Bill Baker's original script is, in the best possible sense, a Frankensteinian monster.  Unlike many of the company's unapologetically experimental works, this play seems like it might have a life beyond its death when OOV closes the show. It might even have — dare I say it — commercial appeal. And yet it also contains many bits culled directly from the Bill Baker playbook.


The conceit: as audience and actors, we've arrived in a liminal space—A theater that is also the mythological purgatory. No doubt there are some among you who find the metaphor especially apt for all the wrong reasons. To that end, it's an idea that works on every level. Even if it sometimes lists in the direction of an intro to (edgy) theater class. The story (story?) goes something like this: Lorre, freshly dead of a cerebral hemorrhage, awakens in purgatory where he's forced to examine his life's work, and come to grips with his essential character. This is an often troubling, but ultimately liberating journey for Lorre, who launched his career in Germany working with great innovators like Jacob Moreno and Bertolt Brecht. But he's best known to Americans (and probably to the world) for creating 20th century cinema's archetypical foreign psychopath/creep in films ranging from M to Mad Love to The Maltese Falcon and various Roger Corman cheapies.


"[Fritz] Lang made me a murderer!" Bob Klyce's Lorre declares, in naked frustration, parsing the freedoms afforded by a prison of success. Before the film M became an international success, Lorre was an actor of notable range. Afterward, he was seldom allowed to venture too far beyond the shadow of Lang's child killer. Figure in Lorre's health-related morphine addiction and there's more than enough internal conflict to build a show around.

Like most OOV pieces An Actor in Purgatory plays with form. The result is a better approach to a specific  genre of plays that are usually developed as predictable, one-man biographical sketches.

An Actor in Purgatory opens OOV's 25-th season. I cannot express how lucky Memphis is to have had this committed troupe of actors, directors, dancers and writers for so long. Even in larger cities, the market for experimental work is limited, and you have to be very scrappy, or extremely fortunate to survive. This new play is a perfect entry point for those who are reluctant to sample the unusual. It could stand a bit of trimming and focus, but An Actor in Purgatory is a fun, fearless look at the life of a great actor who was made— by Lang, Hollywood, and himself— into the image of a great monster.

In a roundabout way the play is also as autobiographical as it is biographical. Our Own Voice's struggle to produce meaningful progressive content in a city that loves its Broadway musicals is reflected in Lorre's life story. The perfect Brechtian protagonist was always torn between the urge to be an artist and the need to feed himself.


The clash between Lorre and Jerry Lewis is classic stuff. You may walk out whistling the theme to M.

People may treat you differently.