Voices of the South Makes Heaven a Place on Earth 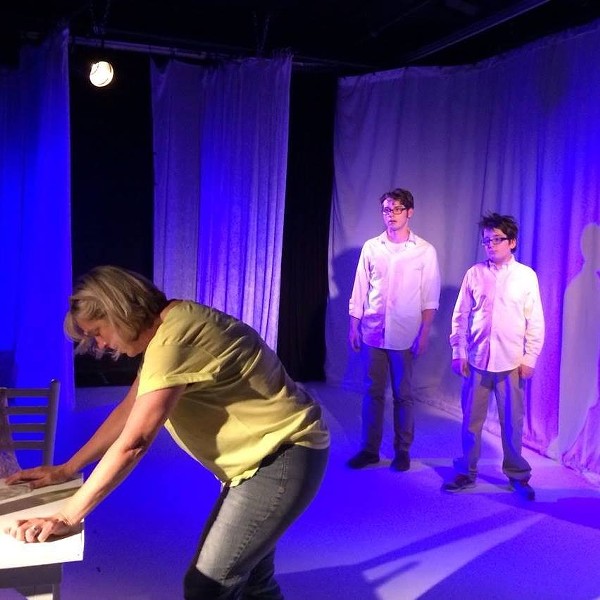 The opening moments are really something to see. The cast members of Short Stories walk through an all white corridor hung with white velour curtains that wear the light like heaven. They carry luggage and pull carts, silently passing one another, making their lonely journeys across time and space by way of this narrow celestial concourse. It’s otherworldly, church-bulletin pretty, with kitschy undercurrents that, because of the context, instantly reminded me of an interview with playwright Jerre Dye’s older brother John who died in 2011. John, a U of M theater alum who played the angel of death character on TV’s Touched by an Angel, once told me how he sometimes made people very uncomfortable on airplanes. The triggered memory made me laugh all over again, and I’m not sorry, though it probably seemed like an inappropriate response to anybody not inside my head.

I’m especially thankful for that opening moment, and for the tone established by VOTS company member Todd Berry in the show’s somewhat meandering opening monologue. I knew right away that this was the classic version of a company I’ve grown up with, at the height of their powers and fully in charge. The content — taking nothing away from its creator — becomes almost irrelevant in hands that know how to sieve meaning from the oddest scraps of found text. After some growing pains, some shakeups, and a victory lap of revivals celebrating 20-years of original play-making, order appears to have been restored. The grownups are in charge, and they’re the same standout kids I remember from 20-years-ago, still turning prose into playful theater. But a lot of water has poured under a lot of bridges over the past two decades. There has been a lot of change, a lot of struggle, and too much loss. Some life-and-company affirming version of The Five People Jerre Dye Wants You to Meet in Heaven is probably overdue for everybody.

Short Stories is exactly what it says. It’s a collection of brief, meditative narratives about loss: Loss of parents, loss of youth, loss of freedom, loss of identity, loss of love, loss of lifestyle, loss of control, loss of innocence, and loss of Jesus. Or Jesusness, at any rate. There’s a lot of Jesus and Jesusness in this play. Many hushed tones and reverent, sweetly-held silences too. Also adjectives. There are lots of glittering, garish, alluring, stinky, and provocative adjectives, languidly, and liberally scattered near adverbs and such. That Dye kid can write, but somebody needs to have a intervention regarding the ornamentals. It doesn’t make his prose richer or more musical, it only makes it more. And by more, in this case, I mean less than it might be. Less confident. Less clear. All heart, but less to the heart of the matter.


"Uber" is a story performed by Berry, about two men telling stories. One is an oversharing driver with roots in the far east. The other is a distant passenger who doesn’t know he’s in powerful need of blessing. 'Uber' is best when it’s in the moment, letting the audience decide what these internal and external dialogues mean as guarded and gregarious strangers clash, connect, and talk about death in their families. The piece ruminates too much on itself. Most all of these stories do. But "Uber" is effective in contextualizing both the evening, and the mission of a theatre company deeply committed to the singularity-like power of stories to connect across cultures, generations, dimensions, time, space and maybe even the void of death.

Jesus and Mrs. Stone is where Dye really unpacks his adjectives. And his Jesus. But let's face it, if you’re not hooked by the faintly New Age-ish inner-child dance that opens this story, you’re probably dead inside. The opening is all about that thing kids once called “the feels” (till their parents coopted it and they outgrew it, and life went on). In a sequence worthy of a Super Bowl commercial for virtually anything (or Guardians of the Galaxy credits at least) a grown man, played by David Couter connects with his old Sony Walkman cassette player and a song that unlocks his younger self (Reece Berry) and everything that mattered to him in the 1980’s. The song is the Go-Go’s first hit, “Our Lips Are Sealed.” What mattered was a fading free spirit named Ms. Stone, perfectly played by Anne Marie Caskey. Like Uber, it turns in on itself instead of resolving. It is, in some regards, one of Dye’s richest portraits wrapped in some of his thinnest writing. A little less wonderous wonderousness and a little more wonder would tighten things right up.

"Two or More," is the treat of the evening, and I’d be happy to spend an entire night in the theater watching Steve Swift and Cecelia Wingate sitting on their imaginary porch going back and forth. "Two or More" starts slow and stays that way, an excelent lesson for all those directors out there suffering under the illusion that broad farce is fitful and frenetic and works best when executed at breakneck speeds.


Voices of the South lives up to its name in so many ways, expected and un. "Two or More," is a direct ancestor of a classic comedy routine most closely associated with hayseed comedian Archie Campbell of Hee Haw fame. Though it was usually scripted, “That’s Good/That’s Bad,” functions like a theater game where a story is told in which all the things that sound good turn out bad and vice versa leading to a usually anticlimactic comic payoff. In this case Swift and Wingate talk about the fate of a young hellraiser who grew into an adult hellraiser who found a good woman that led him to Jesus so he could become a hellraiser for Jesus, before he fell off the wagon and lost Jesus but not the woman or the hellraising. And so on. It’s classic front porch comedy with more substance than it lets on. Pitch perfect front to back.

Short Stories closes with a piece called "Do You Love Me," a boy’s memory of his mother. Like most of the pieces up for consideration in this collection, it loses its way a bit while working through circumstances most viewers will respond to emotionally. That’s not necessarily a bad thing. And David Couter and Alice Berry are so good together you’ll want to call your mama after curtain call, whether you’re able to or not.

This is a pretty show in sentiment and style. It's also some of the greenest writing we’ve seen from Theatre South’s most celebrated voice. Well, at least since the last time the company staged a collection of Dye's shorter works longing to grow up. That collection eventually spawned the excellent new play Distance. I'm really looking forward to seeing what mature things may grow from this latest seed batch.