The Lion in Winter: A Game of Thrones for People who Prefer Implied Sex and Violence

Theatre Memphis' wooden production might benefit from some flesh and blood 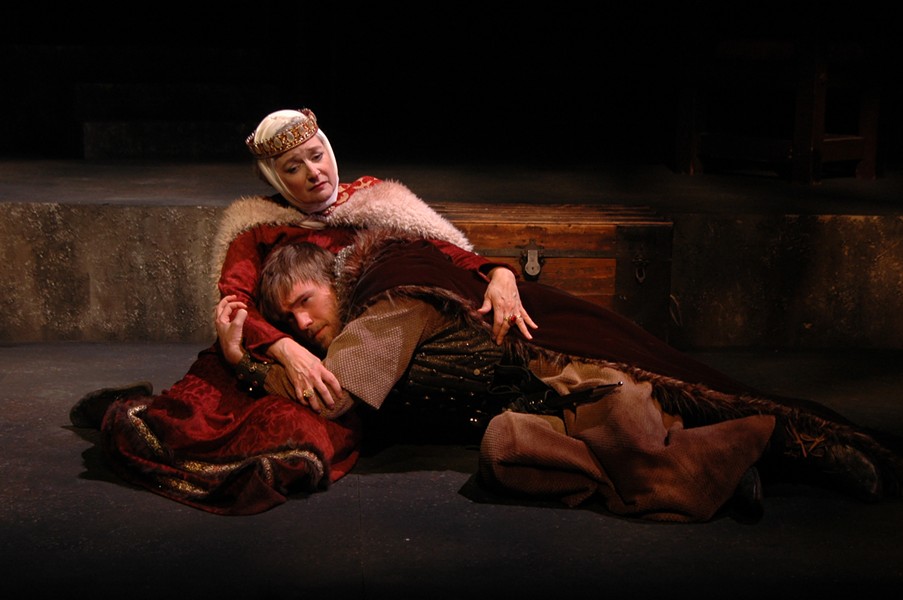 The witty, ornamental banter that makes The Lion in Winter such a joy when it clicks can also be the filigreed anchor that drowns the 47-year-old show in its own stilted cleverness. What the dialogue reveals about the play's characters is never half as interesting as what it hides.

On the surface, James Goldman's play appears to revolve around a power struggle between King Henry II of England, his steel-cut wife Eleanor, Queen of the Aquitaine, and their three horrible sons who all want to succeed daddy on the throne. Personal dramas are built around the squabbling royals, but the play's central conflict — a furnace that should keep this plays engine sparking for ages to come — is raw barbarism in all out war with the veil of civilization. Director Irene Crist's production at Theatre Memphis cuts much closer to the heart of this play that the costume drama version she starred in on the same stage a dozen years ago. But Crist, and her able cast, have fallen into the same traps that turn what should be a tense encounter into a light Medieval drawing room dramedy. Let's call it Noel Coward's Game of Thrones.

Crist's Lion gets a lot right. Jack Yates' unit set projects an air of impregnability, but his compact castle is a subtle shape shifter, and as pliable as it needs to be. André Bruce Ward's costumes are the perfect mix of thick fur pelts, rough textile, metal and and fine fabric. Jeremy Allen Fisher's lighting lacks texture, but that's a small complaint. It's also one of the very best examples I've seen locally of using lighting to edit out all the stuff we don't need to see. The problem is, there's just not a lot action to frame.

I haven't read enough of the Game of Thrones backstory to know just how much fantasy author George R. R. Martin borrowed from the history books. I do know his barrel-chested, pot-bellied King Robert Baratheon has always reminded me of an amalgamation of Henry II, and his father William the Conquerer, right down to the character's death in a hunting accident. Like Henry, Robert's a pistol — an able, sometimes brutal warrior who's happy to make a law now and then when he's free and when he needs to — but he'd much rather be out hunting, drinking and fathering bastards. Charles K. Hodges is a strong performer and a good choice for Henry, but there are key aspects of the character he simply fails to communicate. Henry's not some sage older gentleman, full of restraint and reflecting on youthful indiscretions. He's still a man able and willing to behead rivals while bedding contessas, milkmaids, courtesans, novices, whores, gypsies, jades, and little boys. Hodges talks a good show, but the stories his Henry tells are always at odds with his gentle bearing. Hodges is never dangerous, even when he's holding a sword. There is something basically decent about him and we get the sense Henry might even make a damn fine husband to any wife who didn't lead civil wars against him.

I make the comparison to Game of Thrones here because those three words so accurately sum up what The Lion in Winter is. Also, dialogue written for the enormously successful HBO series, can be quite clever and civilized. But viewers are never allowed to forget that the royal inhabitants of Westeros, no matter how finely arrayed, are serial killers and gluttons who guzzle wine, fuck indiscriminately, bathe sporadically, and shit in chamber pans by the bed. The Lion in Winter can't just tell us about characters, the play also has to show us who they really are. Audiences should think they can smell rotten breath behind all those pretty words. We need to know, no matter how much Henry's family, friends, and foes may attract or amuse us, none of them can be trusted when backs are turned. To that end, Hodges' Henry is too grounded and affable — too much the victim of his family tragedy, and not enough the swinging dick whose preoccupations set all the bloody nonsense in motion. 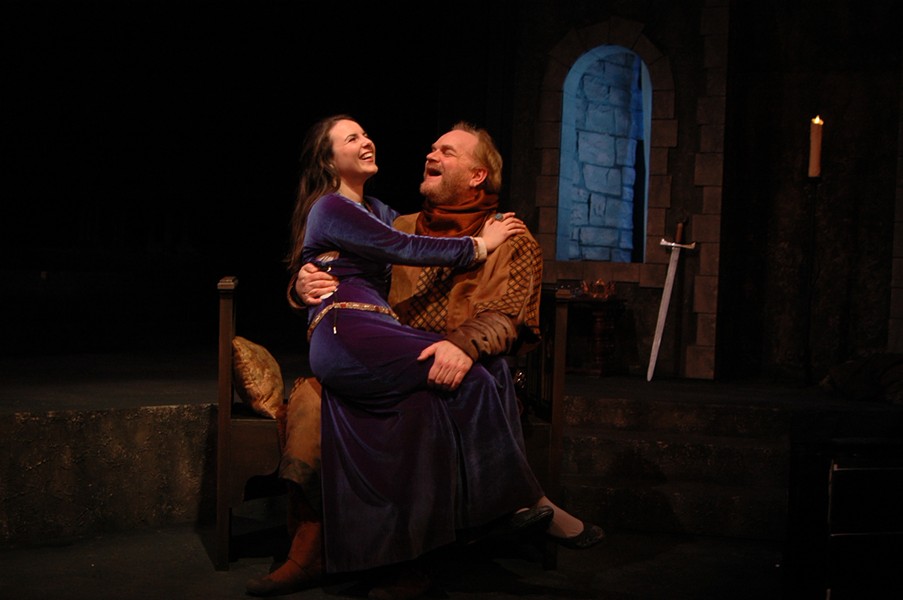 The brothers Richard (Gabe Beutel-Gunn), Geoff (Jeffrey Wellford Posson), and John (Damian Stuchko) are all superbly cast, and each player has his moments. But they don't always play well together. As a group they can be wooden, with little sense they'd all be happy to knife one another in the dark. Stuchko nails aspects of John, the venal little shit who Henry loves best. But there's so much more to his character than stomping to some remote corner of the stage and plopping down in a huff.

Much of the Lion in Winter's plot is pegged to Alais (Emma Vescovo) — the sad Sansa of this story. She's having an affair with Henry, who wants to marry her to John, but she's promised to Richard, and her brother King Phillip of France is prepared to make sure promises are kept. Unless something better comes along. In a contest of kings, queens, and princes, she's the only pawn, and treated as something of an afterthought. Nic Picou is purposeful and effective as Phillip, and possibly the play's most fully realized character.

I feel like a one note singer in regard to Memphis actor Christina Wellford Scott. So often I find her to be a spark of life in otherwise wooden ensembles. That's not entirely the case here, but it it often is. She shares some nice moments alone, with both Beutel-Gunn, and with her real life son Jeff Posson, whose Geoffrey is one of this productions most pleasant surprises. Poor Geoff is often reduced to a sore-tail schemer — part Varys, part Tyrion Lannister. Posson never goes too arch and sacrifices easy laugh lines to flesh out a middle child character who's taken too many knocks to make jokes.

Eleanor is such a plum role, and Scott's a good fit for it. Like Henry, she's wild at heart, and war hardened. She'd hang jewels from her nipples but it would shock the children. It's Henry who says, "be gaudy and to hell with it," but Eleanor has always lived that line out loud. It's easy to make her the Beatrice to Henry's Benedict, or the Kate to his Petruchio. But she's so much more Cersci Lannister — a dangerous would be monarch cursed to be born female. We feel every one of her feels, and enjoy her manipulations but, as with Henry, it's the danger that's missing.

The Lion in Winter didn't make much of an impact when it landed on Broadway in 1966. That was also the year of Peter Brook's groundbreaking Marat/Sade, and a talky, old-fashioned plays like Goldman's seemed like yesterday's news. It wasn't reconsidered until 1968 when the film version was released with Peter O'Toole and Katherine Hepburn as Henry and Eleanor, and a supporting cast that included Anthony Hopkins, Timothy Dalton, and Nigel Terry. With good editing and a soundtrack to help it move along, the film brought an intimacy — and sometimes a claustrophobia — to material the that's difficult to mirror on stage. What wouldn't I give to see a production as thoughtful as this one moved into a smaller space, with modern flourishes and the stakes raised tenfold. If an up close Lion can't be every bit as engaging as an episode of GOT, maybe it's time to let this play — so beautifully preserved on film — fade away into history.