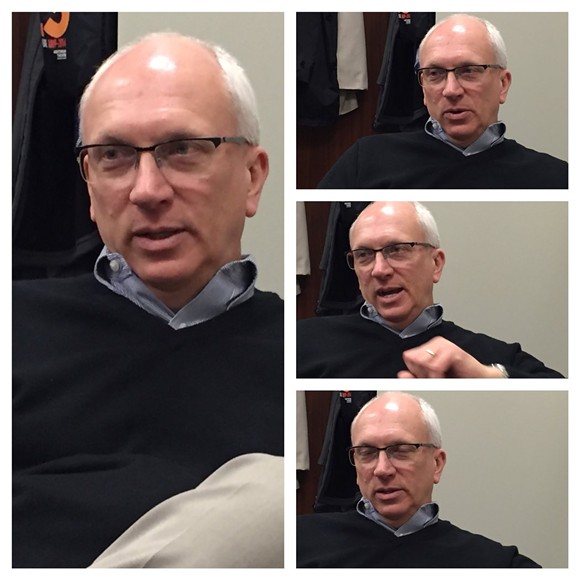 I recently interviewed newly arrived Orpheum Theatre CEO Brett Batterson for Memphis Magazine's 901 blog. It was a lively conversation and I wanted to link it here for folks who may have missed it the first time around.

Brett Batterson leans back in his brand new chair in the brand new Halloran Centre for Performing Arts Education and taps the frame of an old photo— an artifact of his time working for The Nashville Network when TNN’s programing was built around Tennessee’s Country Music industry. “This is The Statler Brothers,” he says. “And this is one of my set designs for The Statler Brothers show. That was the height of Country music and the height of The Nashville Network. I had the good fortune to be in the right place at the right time, which is kind of the story of my life.”

Batterson is the new President and CEO of the Orpheum Theatre, replacing Pat Halloran who retired in 2015 after 35-years at the theater’s helm. Prior to moving to Memphis Batterson served in a similar position at Chicago’s Auditorium Theatre. He’s not from Nashville or Chicago though. Over five decades the plain-spoken Iowan has planted his shiny cowboy boots in ten different states. He’s evolved professionally from performer to scenic artist to theater builder, and finally to arts administrator. Batteson arrives the Orpheum during a major transition, as the opulent antique playhouse on Main at Beale launches its new, state of the art education center.

Memphis magazine: Tell me your story. I’ve done my homework and know all the high points. But I’d like to hear you tell it. I’ll rudely interrupt you with questions along the way.

Brett Batterson: I was born in upstate New York but when I was eleven months old my family moved to Davenport, Iowa. So I was raised in Iowa and claim to be an Iowan but I have a New York birthright, I guess. My parents were puppeteers. My father was a commercial artist and a wood carver, and together they made marionettes and I grew up with a puppet theater in my basement. So all of this has been in my blood since the day I was born.


To read the rest of the 901 interview click here.