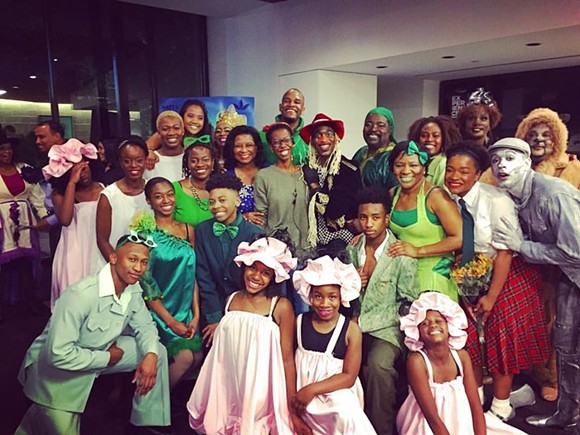 The bad news for slowpokes: Hattlioo's production of The Wiz sold out most of its shows before opening night, and tickets are hard to come by.

The good news for slowpokes: Don't sweat it, you're not missing much. And if you really need a fix, the good parts are all on YouTube anyway.

Also, thank goodness for advance sales, right? Because I really don't think this was the flashy season finale Hattiloo had in mind, and it's doubtful a flat, sung-to-tracks iteration of the Oz story would capture as many imaginations on the merits. There's too much talent on stage to dismiss this Wiz outright, but there's no compelling vision either. Design is uninspired at the edge of being downright counterproductive, and the whole thing smacks of something one might observe in a small town middle school cafetorium.

Even Emma Crystal's typically inspired choreography is only intermittently inspiring.

The Wiz follows the original Wizard's blueprint pretty faithfully. There are Munchkins, and witches, flying monkeys, weird men behind curtains and, "I'm melting, I'm melting," and like that. With its gritty vintage tone and broad emotional spectrum, it can be a moving musical event, and funky good fun for all the senses. But the Hattiloo's music is all canned and thin-sounding, especially when contrasted with live human voices, and good ones at that. It's got no bottom to speak of, and instead of feeling the music in your body as one might in a club — or a good night at the theater — the experience is more like watching karaoke on cable access.

And let's be honest, nobody goes to see The Wiz because they just love the underdeveloped book. Music is the #1 priority, and here it feels like an afterthought.


The visual experience isn't much better. The Hattiloo's versatile space — probably the most customizable in town — seems like it was laid out to host capacity crowds, not to stage a kick-ass musical. The oppressively gray and beige set establishes a playing space that's shallow and broad, so the action's all stretched out and mostly front-facing. Audiences seated on the sides get excluded. Like, a lot.

Pro tip: Sight lines are especially bad for those unfortunate enough to be seated all the way up right and left. Arrive early, sit anywhere else.

I've seen great proscenium-style theater in black box theaters, but that's never the most interesting or effective way to use this kind of space. That said, the creative team could stand to take a cue from the folks doing Peter & the Starcatcher on the proscenium stage next door at Circuit Playhouse and learn how less can be so much more. Actors and storytellers are more important than representational scenery. But I think I miss dynamics most of all, Scarecrow.

This show could have been so much better in the round with a smaller cast, a hot little combo, and a whole lot of creative problem solving.

While the general tone may be flatter than Kansas, there are some real bright spots in the cast. Kortland Whalum has so much presence as the Tin Man it starts feeling like his show every time he sings. Charlton L. Johnson throws himself into the part of the cowardly lion with reckless and refreshing abandon. Mary Pruitt's similarly satisfying as the Lord High Underling, and there are others.

India Ratliff is fine as Dorothy, but for someone in almost every scene, she's never given very much to do. Which is really what's wrong with the whole production. The actors walk around, say their lines and dance with a modicum of conviction. But what should be high adventure through the urban funhouse lookinglass just kind of eases on through the most basic motions.

There've been times when I could easily describe The Hattiloo as being one of Memphis' most consistently creative and resourceful theaters. Fingers crossed the unevenness of recent productions can be chalked up to growing pains. Only a year into the new building, and already this ambitious company is physically expanding to accommodate rehearsals, programs, and events. In the meantime, artistry suffers consistently and considerably.

Nowhere is that more evident than in The Wiz.